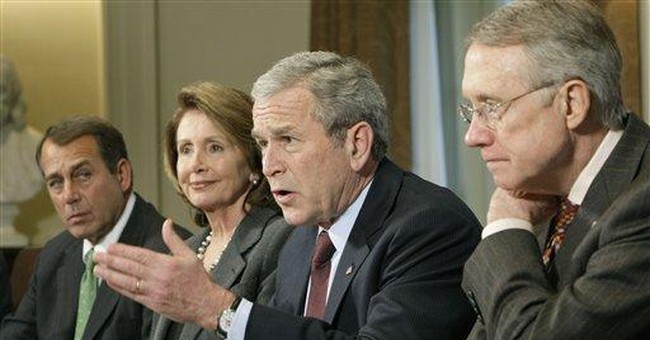 The Federal Reserve Board's emergency three-quarter percentage point cut in its federal funds rate seemed to ease the tremors being felt here while sending a message to overseas stock markets that the Fed would do whatever is necessary to keep the U.S. economy from falling into a recession.

But voter pessimism about long-term growth still dominates the election-year agenda amid growing complaints from supply-side tax cutters that much more aggressive measures are needed to strengthen the economy.

With the economy sending almost daily signs of weakness in its financial markets, corporate earnings, consumer spending, mortgage foreclosures and job losses, Republican strategists say it will take more than President Bush's short-term stimulus to turn things around before this fall's elections.

"Politics is motion. I don't think Republicans can afford to sit idle. We have to figure out some way of putting together the big plan for a stimulus. Inactivity is deadly when it's in a period of economic weakening. This is the time to be aggressive," said David Smick, a veteran economic strategist who advises Republican policymakers and global business leaders.

"They need a big package, and they need to make it an issue in the fall," Smick told me. He is not predicting a recession. "But it's going to feel like one. Last year's fourth quarter and the current first quarter will be very weak. They will miss a recession but not by much," he said.

What has Smick and government policymakers worried is the long lag time between policy changes and when they are reflected in the economic data, plus an added lag before most Americans feel them.

The Fed's interest-rate cuts have a lag time of at least eight months before the stimulus is felt. "That probably means the economy will be improving, but it won't be seen in the data later this year," he said.

The first President Bush faced a similar situation in the 1992 presidential election at a time when the economy was making a comeback from a recession. "But it wasn't showing up in the data. I think the Republicans could find themselves in the same situation this time around," Smick said.

So can a onetime tax rebate plan that totals $160 billion jump-start a $13 trillion economy? The amount of stimulus is a relative thimble-full, and it is likely that much of it will either be saved or used to pay debts, watering down whatever new buying power it may exert. Moreover, the money behind the checks has either come from taxes or from borrowing. "No new spending power is created," says economic analyst Brian Riedl.

"The president's call for tax incentives to boost business investment is exactly what the economy needs to lift it out of its doldrums," Conda said, adding that he would "make the package stronger" by adding corporate tax cuts.

But the Club for Growth, the GOP tax-cut advocacy group, flatly rejects the Bush plan, saying its provisions "are likely to do little to stimulate the economy."

Instead, "we would make the 2001 and 2003 tax cuts permanent," cut the corporate tax rate and lower taxes on capital gains, said Pat Toomey, the group's president.

Last week, Mitt Romney also called for a much bigger stimulus than the president proposed, including permanently cutting the lowest income-tax bracket, dropping the corporate tax to 20 percent and ending the payroll tax for workers over 65.

"The kind of stimulative actions (needed) should be pro-growth," rather than "just writing checks for people to buy oil or TVs," Romney said.

Economist Douglas Holtz-Eakin, who is advising John McCain, rejects Democratic proposals to fill the stimulus bill with public works and social-welfare spending. "We don't want to have a big spending program. We are spending too much already," he told me.

"What we've got right now is the sensation that people are scared and want to be convinced things are being done to strengthen the economy," he said. "Tax relief is a sensible step, putting money into the hands of middle-class families by lowering marginal tax rates. That would be an especially good thing to do right now."

Harvard economist Martin Feldstein, who advised President Reagan, is also calling for more substantive tax cuts "to be enacted now but triggered by what happens to the economy. It could be an across-the-board cut," he said.

Clearly, Congress must act boldly and quickly, job attributes that are in short supply on Capitol Hill right now. There will be a lag time here, too. Still, with its public-approval scores at record lows in an election year and daily signs of a weakening economy, maybe our lawmakers will surprise us, but don't hold your breath.