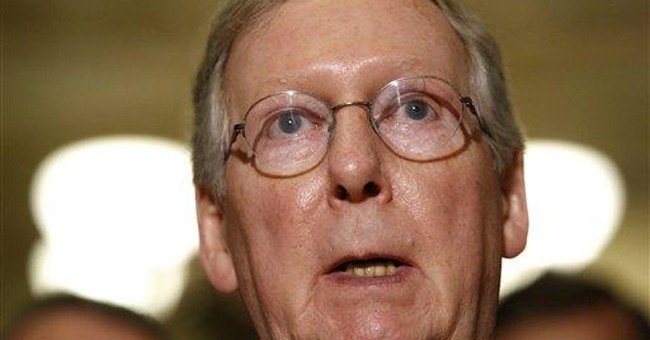 Only the Senate and House Republicans can save Barack Obama now by compromising and lending his extremist legislation the veneer of bipartisanship in order to remove it as a political issue.

If the likes of Sens. Olympia Snow, Susan Collins, Chuck Grassley, Orrin Hatch and others refuse to go along with Obama on health care and on cap and trade, they will force him to pass both programs as one-party bills. Not only is it possible that, as public support runs out on these measures, he will fail even to get 50 votes to approve them, it is likely that even if they go through, they doom his administration to perpetual unpopularity.

Obama is, quite simply, stuck with these programs as a result of his campaign promises. But they will become larger and larger burdens to carry as their unpopularity increases.

Already, only 50 percent of voters indicate agreement with "Obama's health care reforms," while 45 percent register opposition. As it becomes increasingly obvious that these changes will endanger the health care of all Americans, the popularity of the program will fall. And once it becomes clear that the only way to fund it is to tax health care premiums paid by employers (after Obama specifically attacked John McCain for making the same proposal), the ratings of the program -- and of all who supported it -- will drop even more sharply.

The correct way to expand coverage is first to increase the supply of doctors and nurses, and then to ask them to treat more patients. But it stands as a simple fact that if the same number of doctors are asked to treat 50 million new patients, the quality of medical care for the rest of the population will drop.

If health care reform fails to pass, it will be just as destructive to Obama as the failure of Hillary-care to pass was to the Clinton administration. And if it passes, with its taxes and medical rationing, it will prove even more of a drain on his ratings. If you thought the anti-HMO reaction of the 1980s -- with its move for a "patients' bill of rights" -- was hot, the reaction to government rationing and higher taxes will be even sharper.

By passing cap and trade, Obama will inherit the utility rate issue, long the single most potent one at the state and local level. The number of governors who have lost over utility rates (or attorney generals, like Bill Clinton, who got elected because of them) testifies to the political potency of this issue. Now, with cap and trade, it is a federal issue Republicans can deploy to win elections.

But cap and trade reverses this political logic and makes higher utility rates a major issue for Republicans.

And, when the adverse impact of cap and trade on American manufacturing becomes apparent, it will turn blue-collar and labor-union voters against the president.

The question for Republicans is simple: By lending Obama Republican votes, in return for minor concessions, they are letting him escape the inevitable political damage these issues will cause. There is a time for triangulation, but now is the time to stand firm in strong opposition and not be bought off by compromises.

Even if Obama sheds the public option on health insurance providers and lets all the participants in his "insurance exchange" come from the private sector, the government-forced rationing that will still ensue will make this one of the most unpopular programs of all time.

Republicans should not, under any circumstances, give this bill even a single vote. To do so would be to offer Obama an out, doom America to a deteriorating health care system, and take away the Republican Party's best shot for regaining political power and majority status.