After Bailout, Get Out 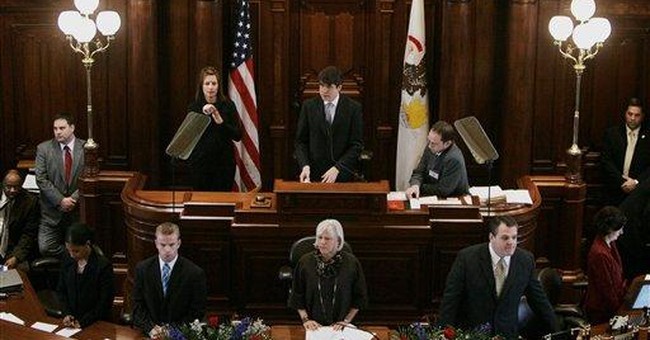 With both President Bush and President-elect Obama pressing the new Congress to appropriate the remaining $350 billion in authorized bailout funds, the Congress has a historic opportunity to demonstrate its preference for the free enterprise system over socialism. Congress should give Obama these funds, weapons in the war against the depression, but ought to attach an amendment prohibiting the federal government from using the leverage the funds give it -- and any equity it may acquire in these companies as a result of these funds -- to influence corporate lending, hiring, management or other practices.

The federal fire department has come to the rescue of these burning companies in the midst of their economic conflagration. The question now is whether the firefighters will go home. Or will they stay on to live in the house they have just saved from the flames, even evicting the homeowners? Will the feds now say, in effect, "We saved you, now we own you"?

The crucial difference between the approach favored by House Republicans and former Speaker Newt Gingrich (R-Ga.) and the bailout that was passed in October of last year was that the Republicans contemplated using insurance and loans, not outright grants, to shore up endangered companies. One key reason for their resistance to giving away grants was the realization that the Democrats would demand that the "taxpayers get something back" for all the capital they were giving banks. Inevitably, they realized, federal aid would come with a demand for government-owned stock in the companies receiving the assistance.

Now that the feds have become stockholders in our major banks and insurance companies, the question is: What will they do with this power?

Hanging in the balance will be whether the United States continues to follow free-market economics or chooses to emulate the no-growth, government-dominated economies that prevail in Western Europe.

Will we cash in our capitalist system for a socialist democracy?

It is easy to see how socialism could start. Federal regulators might demand, with some justice, that banks limit their compensation and bonus packages to senior executives, just as they have already made manifest their displeasure at AIG's party-loving, frat-jock ways. From there, the feds could go to imposing affirmative action goals on hiring and promotion, government guidance on lending decisions, proscriptions on redlining and the like.

It is great that Citibank has agreed to work in bankruptcy courts with defaulting lenders to restructure and reduce loan payments and even to cut interest rates or forgive principal. But it is dangerous that Citi's enlightenment came not from inner virtue but from pressure by its federal government benefactors.

Even if we do not evolve into a European-style government with permanent ownership positions in key banks and insurance companies and a public sector that is not shy about issuing orders, we could go the way of Japan very easily. Tokyo needs no such formal power; a word to the wise whispered into a banker's ear by a MITI bureaucrat can achieve sudden changes in bank policy. The result of this public power over private companies has been a kind of crony capitalism that has brought economic growth to a standstill in Japan as it has in Europe. Too often the public regulators guess wrong, as when Japan told its industry to focus on mainframe computers rather than laptops.

And there is always a Blagojevich somewhere, scheming to get rich by demanding kickbacks from publicly subsidized banks and insurance companies. Political cronyism and corruption seeps into private business decisions when the door is opened by taxpayer subsidies and government stock holdings.

The solution is clear. President-elect Obama wants the $350 billion to be at his beck and call when he takes office. He's right to want it. But Congress should attach an amendment limiting the role the federal government can play in the ownership, management, policies and operations of the companies to which it pays this bailout money. We want bailouts, not a government takeover in disguise.