President Obama: A Trustee in Bankruptcy 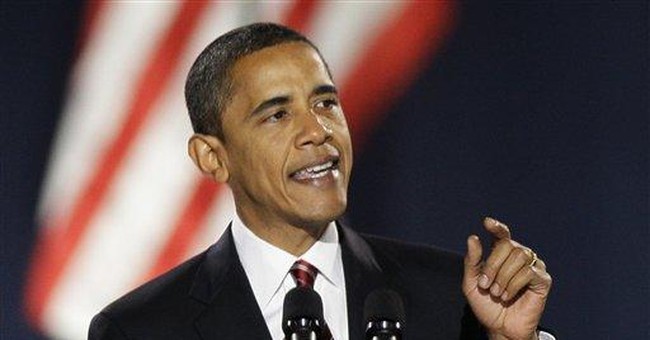 While the Democrats and Barack Obama have won the presidential election and come close to a filibuster-proof majority in the Senate, they will be handicapped by the financial condition of the nation they will inherit. Think of a trustee or conservator of a bankrupt company. Obama will find his options substantially constrained by reality, if not by the partisan animosity of the Republicans.

Those who fear a radical Obama miss the point of the lack of maneuverability of the next president of the United States. Behind the mortgage crisis looms the credit card crisis and the student loan crisis and the car loan crisis. Sweating the credit out of the system will take two years of zero growth or contraction. We won't have a Great Depression because the government will irrigate our economy with money. But we will have stagnation, followed by inflation.

Obama, as the next president, will take office with unlimited political power but with highly circumscribed practical power. He will be able to pass whatever legislation he wants in Congress, but won't be able to indulge his ideology. He will be faced with constraints at every turn.

The irony will be bitter for the Democrats. Finally able to rise above the political limitations they have faced, they will now encounter limits having nothing to do with politics, but having to do with the fundamental problems of the economy they will inherit.

The role of the Republican Party is to rebuild in the shadow of the frustrations of the Obama presidency. Just as MoveOn.org built a massive grass-roots base that yesterday impelled the Democrats to victory, so the Republicans must go down to their grass-roots, get in touch with their base and rebuild an opportunity to win national elections. Government has been bad for the party. It has sapped the party's soul and eroded its purity. But opposition, especially as a socialist like Obama wrestles with the practical problems of capitalism, will be a heady experience for the Republicans. The conservative movement can be reborn in opposition in a way they never could have been as the governing party.

For political historians, it is worth noting that Obama has not scored the knockout that many predicted. He will win by a few points in the popular vote, but not by the double digits so confidently predicted in the media polls. The fact is that most of the undecided voters went to the Republicans.

In the face of a mandate limited by reality and undermined by his inability to sweep the nation as had been predicted, Obama faces a difficult situation as he becomes president. As the economy falls apart around him, he will find himself unable to raise taxes as he wants and will find that his plans for government takeover are stymied as well. He will profit from a political reality that will accommodate his agenda but an economic reality that frustrates it.