Obama Shows His Cool, but McCain Draws Blood on Taxes 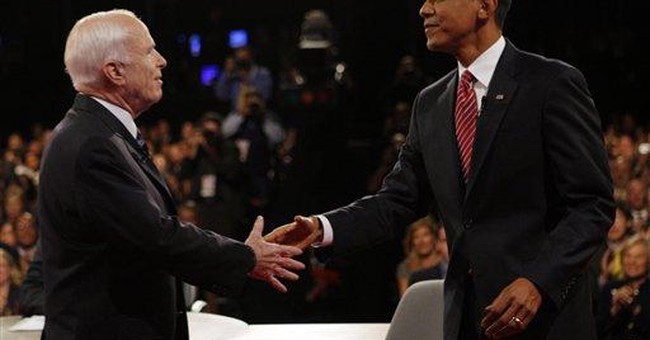 The short-term impact of the third debate will be to help Barack Obama. But the long-term implications may give McCain a needed boost. Obama looked good, but McCain opened the tax-and-spend issue in a way that might prevail.

Obama took the worst that McCain could hand out and came out looking good. McCain was the more aggressive debater, but Obama looked like the better president. The constants of the debate remained. Obama is smoother, prettier, younger and more presidential. But McCain had a feisty appeal, a Truman-esque approach that may resonate in these times of anger and unrest.

Obama seemed to rise above the charges and show his reasonableness and ability to inspire confidence. McCain was like a trial lawyer, hammering out his points, but Obama came across with presidential dignity.

Finally, John McCain came out swinging. In his feisty, aggressive style, he scored key points on spending and taxes. Finally coherent in a way that he had not been in previous debates, McCain repeatedly turned Obama's spending plans against the Democratic candidate. The continued invocation of Joe the plumber brought a populist edge to the tax issue that it has lacked since Ronald Reagan.

Strategically, every debate is a chance to ratify the issues that will dominate the weeks that follow. McCain and Obama both made taxes and spending the key issues of the future. With Obama opposing a spending freeze and billing it as a hatchet as opposed to a scalpel, McCain was able to push the Democrat into an uncomfortable position.

McCain now has established the tax issue in the contest in a way that he previously had not been able to do. Now he can widen the gap between the campaigns on this key issue. If the Republicans concentrate their campaign on the key issue of taxes and abandon the other lines of attack, they can use the lines developed in this debate to do better and better as Election Day nears.

There was no knockout in this debate. Obama emerged with class and charisma from a slugfest. He seemed to be the kind of man we want as president. But McCain was able to set up the tax issue in a way that eventually could close the gap.

Remember the lessons of 1992. Clinton had a big lead over Bush with three weeks to go. But then Bush and Quayle hammered the Arkansas Democrat over the tax issue and his big spending plans. Day after day, the Republicans gained and Clinton fell back. By the Thursday before the Tuesday election, Bush had gained the lead. Ultimately, Clinton was saved by the announcement by special prosecutor Lawrence Walsh that he was going to indict Bush's Defense secretary, Cap Weinberger, which restored the Clinton lead and delivered the victory to him.

McCain is not as good on television as Obama is. So the immediate impact of the debate was to help Obama. But the tax-and-spend issue is the one that the Republican Party wants at the center of the race, and McCain put it there. So this may turn out to have been a turning point for McCain after all.