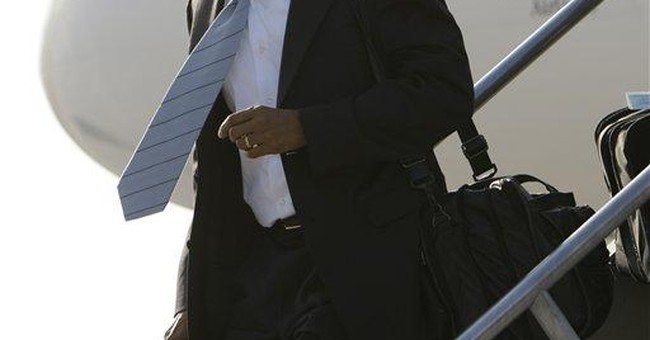 The conventional wisdom has it down pat: A bad economy works against the candidate from the party in power as voters take out their rage and fear on the president's party and back the challenger, just like they did in 1992. But this is not a normal economic slowdown (or recession) and Obama is not a normal challenger. I think the conventional wisdom may be dead wrong.

It is not so much that unemployment is so high (5.7%) or that the economy is in the tank (1% growth this quarter) as that everything seems to be falling apart. Banks are under assault, mortgages are in default, and quasi-government agencies like Fannie Mae and Freddie Mac need bailouts, financial institutions go hat in had to foreign sovereign wealth funds peddling shares of their equity in return for desperately needed cash, the cost of filling a gas tank has tripled. It is not the present circumstances that have voters freaked, it is the threats that seem to loom on the horizon.

And Obama is no ordinary challenger. Not like Bill Clinton, for example. In 1992, from the first moment the campaign started, Clinton billed himself as the expert who could solve the economy's problems. His promise to "focus like a laser beam" on the recession won him big points throughout the campaign. His ten year record as a governor and his chairmanship of the National Governors' Association all bolstered his credentials. But we first met Barack Obama as an advocate of racial and partisan healing and then as an opponent of the war in Iraq. When he tried to morph into an economic expert in time for the Ohio and Pennsylvania primaries, voters didn't buy it and voted for Hillary.

So the question that hangs over the election is: Are we prepared to trust a new candidate with almost no experience and no claim to economic expertise in the middle of one of the most threatening economic situations we have ever faced?

Add to this backdrop, Obama's pledge to raise taxes and you have a combustible situation which could frighten American voters en masse. When, amid relative prosperity, Obama said he would restore fairness by raising taxes on the rich, it was well received, particularly in the Democratic primary. Raising the top bracket to 40% seemed a no-brainer. Applying the Social Security tax to more earned income, not just to the first $100,000, seemed like elemental fairness and a good way to save the pension system. Restoring the capital gains tax to 28% appeared to comport with the notion that those whose income comes from investment should pay a tax closer to that paid on earned income (despite the argument that it is after tax money that they invested in the first place).

But now, with massive capital outflows crippling the public and private sectors, doubling the tax on capital seems like a very, very bad idea. And a sharp increase in taxes on the entrepreneurial class seems like a risky proposition.

And, besides, when a candidate starts raising taxes, who knows where he will stop once his in office.

McCain can put economist after economist on the air to prophesy depression if Obama's plan for taxes is enacted. And the public will not be reassured by the Democrat's claims that his tax hikes are only on the rich.

It almost doesn't matter that McCain is not an economist and avows ignorance of what Thomas Carlyle called the "dismal science." We know McCain. We know he will surround himself with some pretty capable people and, above all, we know that he won't raise taxes.

Were these calmer times, with less of a threat from abroad and less economic danger, we might indulge our penchant for change and elect an ingénue in the hope that he will offer something different. We might be more easily captivated by his charisma. But, in these times, we may want to stay with the safer candidate.