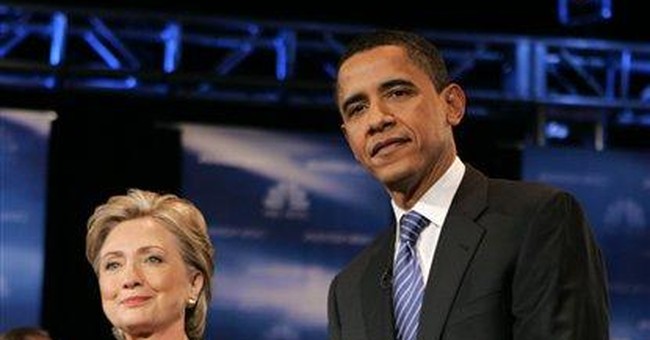 It’s been a rough two weeks for Barack Obama, but his poll numbers remain strong and unchanged. Is he a Teflon candidate?

Consider what’s happened since he clinched the Democratic nomination and Hillary “suspended” her campaign:

• Obama flip flopped on his pledge to spurn private contributions and finance his campaign publicly – as long as his opponent did likewise. McCain said he’s willing and Obama flipped and said he’s not.

• The Democratic candidate was caught flat footed by the sudden spike in oil prices and even defended their high level, lamenting only that we had not been given a period of time to make a “gradual adjustment” to the higher price.

• McCain urged off-shore drilling, which Americans support, according to Rasmussen’s polling, by 70-19, while Obama said no.

• Obama urged that we give foreign terror suspects constitutional rights, including habeas corpus, and even implied that if we caught bin Laden, that’s how he should be treated.

• The head of the commission Obama set up to vet Vice Presidential candidates, Jim Johnson, had to resign after he was found to have gotten millions in sweetheart loans from Countrywide, the mortgage giant that is at the heart of the subprime scandal.

But you’d never know it from the polls. Rasmussen has Obama ahead by four, pretty much where he’s been for two weeks, and Newsweek showed him ahead by fifteen points.

How is Obama doing it? He’s got a defensive strategy based on jujitsu – using his enemies’ strength against him. Obama’s tormentors on the right keep invoking the crazy remarks of Rev. Jeremiah Wright and former terrorist William Ayers to convince people that Obama is some kind of sleeper agent, sent to seduce and destroy our democracy from within. Some wonder if he is really a Muslim masquerading as a Christian.

The more these extreme charges are leveled against the Democratic nominee, the less attention we focus on the very real radical positions that he has taken, grounds enough for a vote against him. The right is so busy pushing Wright and Ayers that it doesn’t have time to focus on what doubling the capital gains tax would do to the country or what weakening the Patriot Act would do to national security. In our new book, Fleeced, we try to spell out the policies that Obama espouses and call attention to the danger they represent. His economic programs would land us in a deep and long recession as he drove capital out by doubling the tax on it. His health care policies would pay for federally subsidized insurance for 12 million illegal immigrants, forcing the rest of us to wait in line for our health care – and often to be denied needed procedures because of “objective criteria” applied by federal regulators.

His comments about forcing anti-terror investigators to proceed as would regular criminal prosecutors ignores the fact that we do not seek to prosecute, but only to prevent terror attacks, and would burden our homeland security people, slowing them down so we get hit again.

There is so much in Obama’s record to criticize, and the right does him a service by vilifying him. You don’t have to believe that he is the Manchurian Candidate to realize that he would be way too liberal as a president.