Anyone Surprised that Iraq is the "New Iran"? 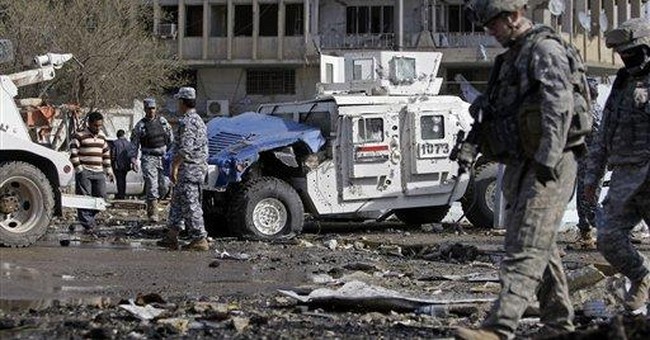 "The real danger in Iraq is Iran. It controls Iraq with a firm fist." So said Iraqi parliamentarian Ayad Jamal Aldin to Bloomberg.com last month in London. "It was through (Grand Ayatollah Ali) al-Sistani that Iran was able to invade Iraq."

"Could you please elaborate on that?" I asked Aldin this week in Washington, D.C., where the leader of the new anti-corruption Ahrar Party was making the rounds. This point -- that post-Saddam, post-surge Iraq (initial thanks to top cleric and Iranian citizen al-Sistani) is effectively a satellite of Iran -- goes against the victory-narrative of the policymakers and pundits who have urged the Obama administration to repeat mistakes the United States made in Iraq again in Afghanistan.

The answer (through an interpreter) was a chilling geopolitical lesson taught from the perspective of an Iraqi Shiite cleric from Najaf, who, from the beginning, as I reported in 2003, has called for the separation of religion and state in Iraq. An amalgam of apparent contradictions difficult to unravel in one interview -- Aldin is considered pro-Western but would support the anti-Western objectives of the Arab League (including the boycott of pro-Western Israel); says "people need nightclubs" even as he believes alcohol consumption "undoubtedly leads one to Hell;" wears the black turban of those who claim descent from Muhammad and penny loafers -- Aldin is nonetheless an insightful, implacable opponent of Iranian influence in Iraq, which, as he describes it, is in full and malevolent ascendance.

First things first: Aldin is grateful to the United States for removing Saddam Hussein. This was a boon, he says, not just for Iraq but for humanity. But due to the U.S. backing "the Iranian men," the net American effect has been to create "a new Iran -- Iraq -- with its capital in Baghdad."

For example, think back to the big Iraqi oil auction last year -- a bust for U.S. oil companies. Aldin explains their being empty-handed with a question: "Is there any U.S. oil business in Iran? No." He continues: "Iraq is the second Iran. The difference between the two is that the new Iran is supported and defended by the U.S. The old Iran is boycotted and sanctioned by the U.S." But there's "no meaning" to such measures because more than the notorious Iranian terror-bank Bank Melli operates in Iraq. A multitude of Iranian banking concerns, he says, operate freely in Iraq under Iraqi names.

Do they laugh at us over things like this? I asked. "No," he replied. "People think the U.S. must be in some big conspiracy." In other words, we just couldn't be as dumb as we really are.

What about China and Russia, the big winners in the oil auction?

"We don't need China and Russia," he replied. "Iran does. Iran needs China's and Russia's support at the United Nations. Iran doesn't have much to give, so Iran gives them Iraqi oil contracts to get their support at the U.N."

"Iran's objective is to drive the U.S. out of the Middle East," Aldin says. And, he says, Iran works with al-Qaida and the Taliban to do so. Testing him on another Washington myth, I asked: But Shiite Iran wouldn't work with Sunni al-Qaida and Sunni Taliban, would they?

"They all have one enemy," he said. "The U.S. -- Shia and Sunni differences don't matter to them when it comes to the common enemy."

He continued. "There is a saying in Iran: The guard of any caravan is partner with the thieves." That, he says, describes Iran's simultaneous support for the government of Iran and its support for al-Qaida, or anyone else operating against U.S. interests -- Baathists, Taliban, anyone.

Al-Qaida and Iran, he says, can control the whole Middle East, between al-Qaida's "southern crescent" (Afghanistan, Pakistan, Yemen and Somalia) and Iran's "northern crescent" (Iran, Iraq, Syria, Lebanon and Gaza). What about Saudi Arabia, I asked.

He doesn't laugh but somehow conveys the impression that he did. Not any kind of a power, in his view. Just rich.

When you tell U.S. policymakers your assessment of Iran in Iraq, what is their reaction?,

Deep inside they may realize what has happened, he thinks. But for now, "they're not interested. State of denial."

You can say that again.