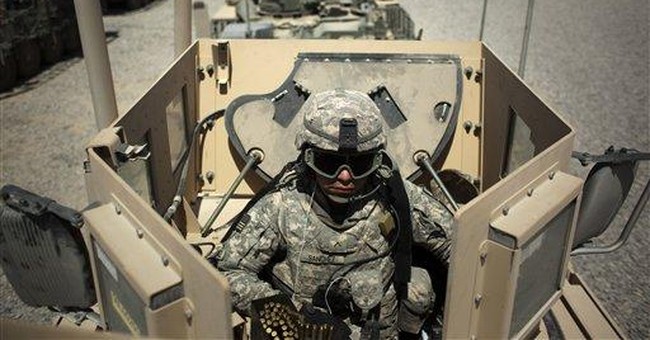 The underreported news is, air strikes in Afghanistan, widely depicted as indiscriminate American causes of Afghan outrage, account for only 20 percent of the total. Suicide attacks and roadside bombs, attributable to jihadists, killed 39 percent. Assassinations -- another Taliban specialty -- claimed 11 percent, while "other," divided between pro- and anti- government forces, was responsible for 29 percent. In its own reckoning, UNAMA states that "59 percent of civilians were killed by AGEs (Anti-Government Elements) and 30.5 percent were killed by PGF (Pro-Government Forces)."

A question for our brass: If the Taliban is responsible for disproportionately more casualties than the United States -- and purposely so where ours are inadvertent -- shouldn't, by our brass' own reckoning, all those Afghan hearts and minds already belong to us? Could there be something else - such as the Islamic religion - causing Afghans to reject our infidel "hearts and minds" pathetically pressed on them, along with grotesque sums of money, like hopeless valentines?

These are questions the brass can't answer, can't even think about, because the answers would upend America's entire Afghan strategy. We are in a war on civilian casualties in Afghanistan to win Afghan hearts and minds. Period. And woe to statistics, let alone basic and intractable religious differences, that undermine this illusory strategy.

But there is something else Americans should become aware of regarding the military's obsession with further decreasing casualties as a means to victory. Our troops, the brass says, are the ones who are ultimately going to have to find what Gen. Stanley A. McChrystal, our new commander in Afghanistan, earnestly calls the "balance."

I watched McChrystal discuss his mission to further decrease civilian casualties in an online BBC video this week. "It's a balance for the young soldier on the ground who is in combat," he explained. "One of the assets that he has that might save his life might be air power or indirect fire from artillery or mortars and we don't want to take away that protection for him."

No, we don't, General. So why are we even talking about it? The lightly hinted implication -- that our troops may be called on to think twice about saving their own lives -- is chilling. He went on:

"What we want to do is build into our systems, and more importantly, build into the minds of all of our soldiers that everything that they do is important in this fight, and we're here to protect the Afghan people. And we're here to protect them from everything that can hurt them, both enemy activity but also inadvertent activity by Afghan forces or ours. So we're trying to build into the culture of our force tremendous sensitivity that everything they may do must be balanced against the possibility of hurting anyone."

Tremendous sensitivity is right. "The Afghan people are the reason we're here," McChrystal explained, weirdly disconnecting the American war machine from national interests. And to gain their "support," it seems the United States will do anything, even build potentially fatal hesitation into "the culture of our force," instilling possibly dangerous second thoughts into split-second decision-making. This way, these best and brightest of ours tell us, we will placate the trumped-up boogey-man of "civilian casualties," which is the sure-fire way, they promise, to win Afghan "hearts and minds."

"Victory in this conflict is about winning the hearts and minds of the Afghan people and engendering their trust," Brig. Gen. Steven Kwast, commander of 5,000 airmen at Bagram Field, told the Air Force Times last week. "When the Afghan people trust us and believe us ... we will win this overnight."

Just don't anyone hold his breath.