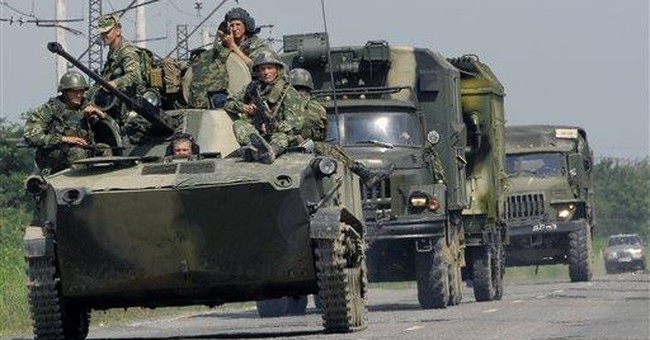 Amazing how quickly the punditocracy switches maps, time zones and histories, simultaneously mastering new combinations of consonants and vowels, to report and react to a "surprise" conflict in Georgia. It's almost hard to recall that, just a few days ago, the most urgent questions confounding most of the media had to do with just how narcissistic John Edwards really is, or what the ramifications of Barack Obama's plans to announce his vice presidential pick via text message might finally be.

Since the sight of tanks rolling usually has a way of concentrating the media mind, the question has become: Whither Russia?

In truth, the demise of Aleksandr Solzhenitsyn earlier this month was a journalistic godsend. After all, who hadn't already dusted off their long-retired Soviet history books -- not to mention their long-retired Soviet history experts, all of whom have had the busiest couple of weeks in years -- by the time Vladimir Putin announced last week that "war has started" over South Ossetia and Abkhazia?

Historical memory somewhat refreshed, Western media were ready with the headlines -- "The evil empire is back"; "Welcome to the 19th century"; "The Russian bear's new teeth" -- to promote the main thrust of most stories: namely, that Russia is reverting to tsarist, expansionist, Soviet-style, empire-amassing type.

It's not that there's anything controversial in this journalistic approach, although I do tend to think there remain aspects of the Georgian story we haven't reconciled. What's noteworthy about this narrative consensus, however, is that the invocation of Russia's historical and cultural record is being made so frankly and without hedging. That is, no one's blaming "Russian extremists," "tsarismists," or "hijackers of a great history." On the contrary, the implication behind most Russia-versus-Georgia stories is that the Russians' world-stage behavior as they smash Georgia is something that this same historical and cultural record tells us that Russians do.

Certain political leaders in the West are saying much the same thing. British Foreign Secretary David Miliband said the invasion was "a reversion to not just Cold War politics, it is a 19 century way of doing politics." At home, John McCain explained the Russian strike against Georgia as a part of the same historical continuum: "I think it's very clear that Russian ambitions are to restore the old Russian empire. Not the Soviet Union, but the Russian empire."

And why is this important? When I started seeing these stories and statements -- even making some of them myself -- I realized there was something free-wheeling about the style of expression that made it different from what has been the norm. I first wondered if there was a somewhat perverse trace of nostalgia in dealing again with the Russians. And then it hit me. In the nearly seven years since Islam has wholly dominated current events, neither our media nor our leaders have ever, not even once, looked at similarly characteristic behavior from the Islamic world and labeled it accordingly.

In other words, no pattern of avowedly Islam-inspired violence in the world has ever earned a headline nearly as straightforward as "Islamic jihad is back." Not even the Islamic success of Motoon Rage, which has severely repressed Western modes of expression regarding Muhammad in particular and Islam in general, inspired anything as descriptive as, for example, "Sharia's new teeth."

Ask yourself: Would any British foreign secretary of the postmodern age look at, say, last year's trial of a British teacher in Sudan for "blasphemy" in naming a teddy bear "Muhammad," and conclude: "It's a reversion to not just post-colonial politics. It is a seventh century way of doing politics"? Hah.

And what American presidential candidate would ever explain the Islamic push, financial and otherwise, in the West for mosque construction, Islamic schools (madrassas), campus Islamic studies (apologetics) departments, Sharia law-inspired legal challenges, lobbying for Sharia-compliant banking and the like as a matter of Islamic imperialism?

I quoted McCain above discussing, matter-of-fact, what he considers to be catchall "Russian" ambitions to restore the "old Russian empire." Would he, or any other American politician, ever say the same regarding catchall "Islamic" ambitions? While both Russia and Islam claim similarly long histories and cultures of conquest for reference, it's mighty tough to imagine any U.S. politician ever saying the following: "I think it's very clear that Islamic ambitions are to restore the old caliphate." (And that's despite a growing body of statements, even polling data, reflecting the persistence of Islamic caliphate dreams.)

I'm afraid all the radical, fasco-Russian tsarismists will have to abandon their quest for world domination before we hear anything like that.