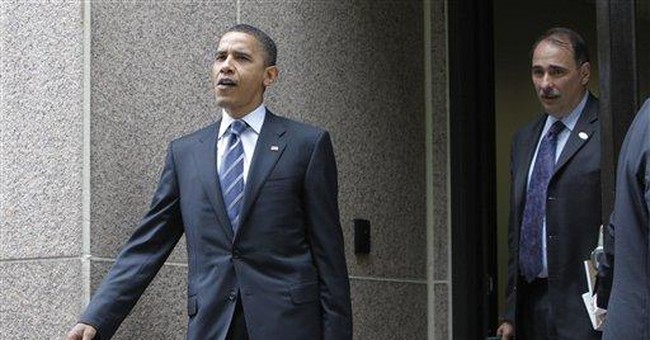 I think it was the American Thinker blog that first went public with the suggestion that we may see post-convention "mass events" for Barack Obama "at least slightly reminiscent of the stagecraft of Leni Reifenstahl in 1934 Germany."

1934 Germany, of course, was Hitler's Germany. And Reifenstahl was Hitler's adoring documentarian. Her film "Triumph of the Will," which captured the well-rehearsed, "mad orator" thrilling the German masses at a Munich rally, remains a milestone in both film and propaganda.

I first read about this startling, but quite plausible, notion on a conservative blog, but I first heard the Reifenstahl comparison made by a liberal columnist last week. In reacting to Obama's plan to accept the Democratic Party nomination for president -- not at the indoor site of the Democratic convention in Denver that seats 20,000, but at the Broncos football stadium that seats 75,000 -- the liberal columnist said to me: What's the first thing you think of in connection with Obama standing before those cheering masses?

"Triumph of the Will," he answered. Not a good image, he concluded.

This, obviously, is not to suggest Obama has a Hitler complex. If anything, he may have too little historical awareness of the nightmarish resonance of Hitlerian stagecraft for the masses, which, as Paul Johnson wrote in "Modern Times," (Harper Perennial, 2001) was the first "to appreciate the power of amplification and the devilry of the searchlight." This description has always made me think of the latter-day rock concert. And it is that rock-concert effect -- surely a pop-cultural triumph of the emotions, if not the will -- that Obama is after. In the end, it is a political high that could take him over the top.

Yes, John F. Kennedy accepted the Democratic presidential nomination at LA's Memorial Coliseum in 1960 -- largely a pre-rock-concert era, incidentally. And yes, the Obama campaign has emphasized this precedent as further evidence of the link they make with JFK, even as history remembers the 35th president as a supply-sider and Cold Warrior (and womanizer). Of course, such right-wing positions are suddenly within Obama's reach as the presumptive nominee continues "lurching right when it suits him," as lefty New York Times columnist Bob Herbert put it. And now, with Obama's planned July globetrot through Europe -- Obama: The 2008 World Tour? -- the rock star-Kennedy connection is a lock.

Why? Because one of Obama's gigs, I mean, campaign stops, is Berlin, site of President Kennedy's memorable 1963 declaration: "Ich bin ein Berliner!" Turns out the senator from Illinois wants to make a major speech there, too, and he wants to make it from the world-famous Brandenburg Gate.

"The senator was criticized in the primaries for showing insufficient interest in Europe," an unnamed adviser told Der Spiegel magazine. "This visit is an answer to this criticism."

Please. Showing up isn't "interest" -- it's tourism. But where the Obama campaign is concerned, it's also a pilgrimage. As the Obama adviser rather weirdly added: "The memories of John F. Kennedy's 1963 speech are still very fresh."

Historic, to be sure. But "very fresh"? Probably only to Team Obama fanners of the Kennedy flame, who, conveniently, in their careful advance work fail to flag Ronald Reagan's more recent address at the Brandenburg Gate. In describing Berlin to the German magazine as "the bridge between East and West," they practically seem to have missed the end of the Cold War, not to mention German reunification -- exactly what Ronald Reagan was fighting for, when in 1987 he forcibly challenged Mikhail Gorbachev to "tear down this wall." That was the same Berlin Wall, come to think of it, that in 1961 JFK allowed to go up and stay up.

Of course, the Obama campaign isn't seeking historical parallels, but perfect props -- a telegenic and world-famous backdrop, an increasingly mystical, if apolitical Kennedy connection, an ever-emotional crowd. And with a whopping 72 percent of Germans backing Obama in a recent poll, they'll surely get the crowd. It should be a great concert, I mean, event.

Not that it really matters, but what will he say? It's impossible to predict, but the London Times Online, based on an "insider tip," has reported that Obama (just like JFK, natch) will address the masses in the local lingo: "Ich kann zuhoeren!"

This may sound great in German. But it simply means, "I can listen!" Not the most stirring political message, perhaps, but surely music, of a kind, to the roaring crowd.