Devon Herrick
|
Posted: Sep 03, 2019 12:01 AM
Share   Tweet
The opinions expressed by columnists are their own and do not necessarily represent the views of Townhall.com. 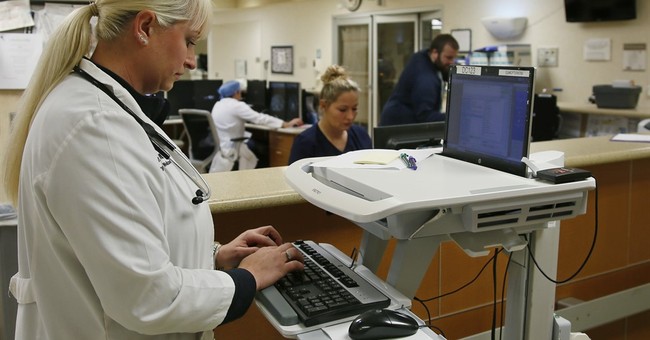 Congressional debate to protect consumers from surprise medical bills faces an uphill battle against well-funded, entrenched stakeholders. Providers who are getting rich off the status quo are spending millions running television advertisements and lobbying Congress hoping to kill surprise medical bill legislation. The groups funding ads sound innocuous, with names like Out of the Middle and Doctor Patient Unity but their goals are not benevolent.

Surprise medical bills drive up the cost of health care to benefit a small number of special interests. Really, it’s just a handful of physician specialties and private equity investors who reap the benefits of surprise medical bills. The tab for surprise medical bills is far greater than the sum of unexpected bills that land in patients’ mailboxes. Also paying an enormous price are insurers and employers who sponsor employee health plans. Of course, this leads to higher premiums, higher cost sharing and higher employee contributions.

Surprise medical bills result from what economists call market failure. For markets to function properly there must be checks and balances to punish bad behavior by service providers (and reward good behavior). Let me explain. In normal markets the person paying the bill can hire and fire vendors. For example, consumers patronize retailers based on a variety of factors. Price is one consideration, although rarely the only one. Consumers withhold their patronage from stores that fail to compete for their business or lose their trust. Thus, retail stores have an incentive to provide consumers with quality services at fair prices. By contrast, surprise medical bills occur primarily where there are no checks and balances that reward competition. Over time this arrangement turned abusive as some provider specialties realized they could price gouge with no need to compete for patients’ patronage because their patients were powerless to stop it.

Consider this: Health plans negotiate fees with provider networks in return for steering business to network providers. Granted, direct primary care physician practices market themselves directly to cash-paying patients. However, most physicians compete for insured patients by affiliating with provider networks. Why? Because patients often choose their physicians based partly on network participation and the lower cost-sharing associated with treatment by in-network physicians. However, those providers responsible for most surprise medical bills are the ancillary physicians who patients cannot personally choose and whose services they cannot decline. Patients may never meet them prior to receiving care or may never meet them at all. Ancillary physicians tend to work inside hospitals, clinics and labs and are chosen (i.e. contracted) by hospitals, clinics and labs where they work. For example, hospitals choose the emergency medical physicians who staff emergency rooms, or they contract with a staffing agency. Radiologists, anesthesiologists and pathologists may be on call and have an arrangement with a hospital, but they are rarely chosen by their patients. Hospital privileges may not require ancillary physicians to be affiliated with any hospital networks. Yet, neither can patients deny business to ancillary physicians who are out-of-network and charge higher than normal fees. There is no credible doctor-patient relationship. Thus, the checks and balances present in normal markets are missing when patients cannot hire or fire their providers.

There are a variety of ways to attack market failure leading to surprise medical bills. Some methods are better than others:

Arbitration and mediation. A method used in various states currently being debated in Congress is holding patients harmless and using arbitration (or mediation) to settle fee disputes between out-of-network providers and health plans. One drawback of this approach is that arbitration is labor intensive. A risk is that special interests will surely try to manipulate the arbitration process, lobbying to base arbitration fees on inflated (list price) charges rather than actual fees collected by similar providers in the same region.

Standard fees. A way to either aid (or avoids) arbitration is to assess standard fees based on a benchmark. Median in-network fees paid for a service in the region or some multiple of what Medicare pays for the same service are two types of benchmark standards. A weakness is that standard fees are always subject to political manipulation and lobbying in ways that harm consumers. Another weakness to this approach is it runs the risk of creating price controls, which may be higher or lower than would occur in a competitive market.

Hospital contracts. Perhaps a way around price controls is for Congress to declare ancillary physicians de facto employees of the hospitals, clinics and labs where they work or have privileges. Hospitals possess the power to negotiate the conditions under which providers with hospital privileges can work. For instance, this could mean hospitals require ancillary physicians to accept in-network fees from the networks the hospital affiliates with. Alternatively, health plans could pay standard fees. A common ratio for in-network physicians is 130% of what Medicare pays for the same service. Physician practices or physicians who feel they are worth more than the standard fees should be free to negotiate additional compensation from their hospital employers. Since it is hospitals who drive business to ancillary physicians, hospitals are the logical parties to negotiate compensation beyond standard benchmark fees.

Devon M. Herrick, PhD is a health economist and former hospital accountant. He has written and researched health policy for 20 years.