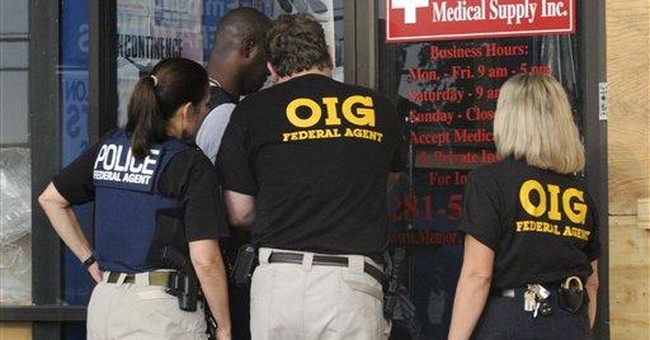 A recent report from the Health and Human Services Office of Inspector General (OIG) found Medicare has been buying drugs for dead people.

A Congressional bill introduced today in the House Ways and Means Committee would help control this reported abuse from beyond the grave but first I’ll explain the situation.

According to the recent OIG report, 158 deceased Medicare beneficiaries filled 348 prescriptions for HIV drugs (worth nearly $300,000) at pharmacies up to a month after death. The OIG report explained — in perfect deadpan — “[d]rugs dispensed after death cannot be used for medically indicated purposes and therefore are not covered by [Medicare]…” No kidding! No need to reach for the guide, Preparedness 101: Zombie Pandemic, that the Centers for Disease Control and Prevention (CDC) published a back in 2011. That 36-page graphic novella was only intended by the CDC to teach emergency preparedness in a humorous way. And, while it’s not zombies walking into pharmacies to fill prescriptions, others are – using the deceased beneficiaries’ identities.

The news that Medicare bought drugs for dead people came on the heels of an earlier OIG report that found about 1,600 (presumably living) Medicare beneficiaries also filled inappropriate prescriptions for expensive HIV medications. Half of those individuals didn’t even have HIV, while others filled redundant prescriptions for quantities far beyond what’s clinically indicated or safe. Since the OIG analysis examined only a fraction of 1 percent of Medicare drugs in 2012, the magnitude of the problem is potentially 100 times worse than what OIG found.

When Congress created the Medicare Part D drug program back in 2003, it inadvertently created a license to steal. A small minority of Medicare beneficiaries abuse prescription drugs for recreation. Others commit fraud for profit when they acquire drugs they don’t need with the purpose of reselling them. The OIG believes some of these drugs were likely resold on the illicit market due to their high resale value. Another possibility is that bogus pharmacies stole enrollees’ identities and bilked Medicare for drugs never dispensed.

This fraudulent activity jacks up costs for the Medicare program, for taxpayers and Medicare drug plans enrollees — who pay higher premiums as a result.

The most common way Medicare drug fraud occurs is by ‘doctor shopping’ for painkillers. This involves patients seeing multiple doctors every month with complaints about chronic pain. In the process, drug-seekers receive expensive and redundant exams and diagnostic tests from each doctor, while requesting prescriptions for powerful pain medications. For every $1 worth of drugs lost due to fraud, an additional $41 is wasted for unnecessary physician visits, redundant medical tests and unnecessary ER visits to obtain the drugs.

To avoid detection, drug-seekers fill their prescriptions at multiple pharmacies — hoping that no one pharmacy will track their behavior and question them. This tactic often fools individual doctors and pharmacies into believing their customers are not abusing painkillers (or reselling them). However, Medicare drug plans can easily detect drug-seeking behavior when processing pharmacy claims. Currently, federal law does not allow drug plans to restrict drugs that Medicare enrollees are found to be abusing or reselling. The newly introduced bill would change that.

If this all sounds ridiculous to you, you’re not alone. The OIG also believes Medicare needs more legal remedies to fight drug fraud. The watchdog agency recently recommended Medicare grant its drug plan administrators the right to identify enrollees found to be abusing or reselling drugs and assign them (that is, restrict them) to specific providers for those drugs. The OIG also recommended shortening or eliminating the 32-day window that allows pharmacies to bill for drugs dispensed to beneficiaries who have since died.

What needs to be done? Kevin Brady (R-TX), Chairman of the House Ways and Means Subcommittee on Health and ranking member Jim McDermott (D-WA) just introduced the bipartisan bill, The Protecting Integrity in Medicare Act of 2014 to combat Medicare drug fraud. Among other things, the proposal would allow Medicare drug plans to restrict individuals found to be abusing drugs (or defrauding Medicare) to one doctor and pharmacy for narcotic pain medications. This program has already been successfully implemented in most states’ Medicaid programs. It is also good idea to consider expanding the program to include more drugs than just narcotic pain relievers if patterns of abuse are detected.

Medicare needs the ability to shut out fraudsters billing for bogus transactions — and assign troubled enrollees found to be abusing (or reselling) drugs to specific providers. Otherwise, the rest of us will continue to pay for the abuse.