Derek Hunter
|
Posted: Aug 22, 2021 12:01 AM
Share   Tweet
The opinions expressed by columnists are their own and do not necessarily represent the views of Townhall.com. 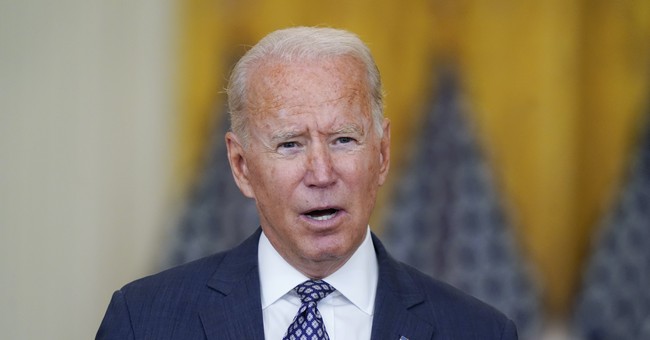 I’m not a supporter, not even a fan. But this is not about that or the short temper you show off anytime someone dares push back against your assertions in an interview (or the insecurities and shortcomings that trait helps to mask), this is about what to do in Afghanistan.

I wouldn’t normally write. Watching your policy agenda fail is something I enjoy, but this isn’t policy, this is lives. I don’t want to see people die in order to have more people realize how in over your head you are in this job. Therefore, there are certain things of which you seem unaware as President of the United States that only the President of the United States can do, most of which will improve the situation and all will save lives. Since none of the limited number of people who have access to you seem willing to tell you these things, I thought I should.

First, you are Commander-In-Chief of the armed forces of this country, and this country has the strongest military in the history of the planet. There is literally no reason to cower in fear of a band of luddite zealots. You shouldn’t have pulled out our troops before bringing out our civilians and Afghan allies, nor should you have closed Bagram Air Base, but you have to know that by now. If you don’t, you should resign immediately as you are beyond incompetent and an active danger to the people of this country.

Since Hamid Karzai Airport is so small compared to Bagram, our ability to get people out is severely limited. Send troops to retake Bagram. This will speed up the process and make supplying people on the ground easier.

I know there is risk in retaking anything, we could upset the Taliban. But here’s how you do it. You tell them we are doing it, that we’re going back to Bagram, and if any of their fighters so much as jaywalk in front of our personnel going there, every single one of them our troops come across will be killed and we will bomb the absolute hell out of every single place they are from the air, particularly their leadership.

The average illiterate Taliban goon may not care about being killed, having been conned into thinking there’s a pile of virgins waiting for them on the other side, but their leaders know heaven isn’t a brothel. That’s why suicide bombers are never senior officials, they’re always dumb new recruits. Threatening leaders, which should be easier now that they’ve crawled out from under their rocks, would have an impact.

Use that attitude and knowledge to inform the Taliban that American forces, which will need to be increased for this, will be driving throughout not only Kabul but the whole country, collecting Americans, our Afghan allies, and other foreign nationals (because you inexplicably pulled out our troops before informing our allies too). If they don’t like it, they can have a shooting war again. And not the type of “war” we’ve been waging, the kind that caused this mess in the first place. No, tell them they will get the type of war we waged during World War II – bombing the absolute feces out of wherever they are, no matter what they wrap themselves in or hide behind. There will be no quarter, no politician-imposed rules of engagement more concerned with the possibility of bad press at home than they are killing the enemy and winning the action.

This will make you uncomfortable. Not only are you not a strong leader, you’re a career politician who is used to ducking responsibility for anything. You will run the risk of there being video of dead civilians in rubble, but so what? You are running the risk of American civilians being left behind or taken as hostages now, and your job is to protect them, not your poll numbers. Do your job.

None of this is to get our troops to stay, 20 years is more than enough and we should leave. But how we get out matters now, since you’ve screwed this up so much. You seem obsessed with being out by August 31st. No one but you and the Taliban cares if that happens. I know, you gave your “word as a Biden,” but that’s worthless. Hunter is a Biden, and your grandchild he had with that stripper is a Biden, and you haven’t even bothered to acknowledge she exists, so your “word as a Biden” means nothing.

What should mean something is the oath you swore to the Constitution. Your duty requires you to do whatever is in your power to protect American citizens. We have the strongest military in the history of the world, what good is it if you won’t use it to protect those citizens?

Retake Bagram, use it as a base to get people out in an orderly fashion, go get the people the Taliban won’t allow to get near the airport, and make it clear that you will kill every Taliban fighter you come across if any Taliban fighter attempts to stop or even hinder it. Oh, and destroy every piece of military equipment the Afghan army abandoned to the Taliban along the way.

If you do this, and do it in a way you, your advisors, and the bureaucrats with start on their shoulders in the Pentagon can stomach, there’s no reason to think it couldn’t be finished inside of a month, at the most.

Then you have to fire everyone who advises you on these issues, or resign yourself. Because you either were misinformed or you lied to us about what you were told. The only other option is you’re too senile to remember having been told. None are good options, and all require accountability.

If you want a legacy that isn’t just setting the largest pile of money in history on fire and being humiliated by people for whom marrying 12-year-old girls and raping boys even younger than that is an acceptable norm, it’s time to step up and do the right thing for once in your life. It’s already too late for you to go down as a good President, but you don’t have to be a complete disgrace. Just because you almost already are doesn’t mean you have to be Jimmy Carter.

If that’s not enough of a motivator for you, think of it this way: if any Americans are killed in this mess you created while you kept US troops quarantined at the airport, you will be impeached. Maybe not while Democrats control the House, though they’d have a hard time justifying not doing it, but certainly after Republicans take it next year. You may not care about the lives of others, but you do care about your name…as a Biden. If everything else good and decent fails, let that motivate you to do the right thing.

Trending Townhall Video
Did a Political Dispute Cause a North Dakota Man to Kill a Teen? Either Way, He's Now Charged With Murder.
Matt Vespa
Why a Vice News Story About Reintegrating Sex Offenders Into Society Ended Poorly
Matt Vespa
Ford Presents Franchised Dealers With an Ultimatum on EVs