Children Are Off Limits, Not Degenerate Adult Offspring

Derek Hunter
|
Posted: Jun 10, 2021 12:01 AM
Share   Tweet
The opinions expressed by columnists are their own and do not necessarily represent the views of Townhall.com. 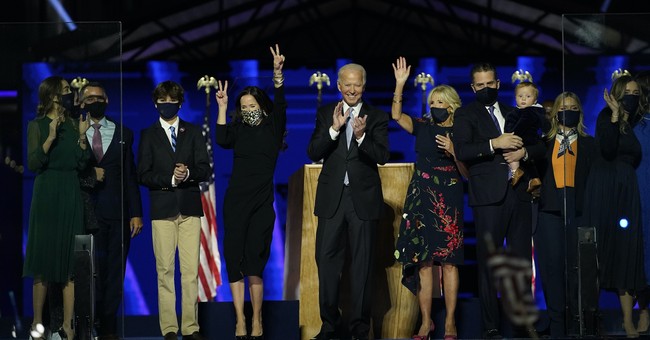 When Saturday Night Live made fun of Chelsea Clinton, the entire media went crazy and forced an apology. Jokes at the expense of the Obama daughters were met with similar outrage. The Bush daughters…not so much, but there was some “this is inappropriate” talk. The rule of thumb has been that children are off limits in the game of politics, and for good reason – just because their parent is in public office doesn’t mean it should be open season on them. Kids can’t pick their parents, and kids should be free to be kids. Adults, on the other hand, are fair game because, well, they’re adults.

Family has been a part of politics in the modern era for a long time. Billy Carter was a goofball weirdo who embarrassed President Jimmy Carter from time to time. But then Jimmy Carter’s policies embarrassed him more times than “Billy Beer” ever could. President George H.W. Bush’s brothers were attacked in the press and campaigns because they were older and involved in some embarrassing situations. Roger Clinton was a ball of scandal, and Barack Obama never bothered to know his siblings.

But again, their kids were mostly left alone, adult or not. If they broke the law, it was news. If they did something stupid, it wasn’t. They weren’t elected to anything.

Adult children, on the other hand, were treated like adults. Most were smart enough not to embarrass their parents. While they weren’t public figures, they knew their name would make the papers if the news wasn’t good.

The Trump children were not only fair game, the left put bounties on their heads. There really wasn’t a lie left untold about them. They were dragged before Congress, seemingly only to force them to pay for lawyers. Everything was alleged, nothing even close to being proven. When your accusers are Adam Schiff, Eric Swalwell, Rachel Maddow, Don Lemon, etc., the only “proof” needed was the name “Donald Trump” listed as father on your birth certificate.

Columnists, pundits, politicians, actors all took wild, libelous shots at them. Still, the Trump’s didn’t whine. Books were written about them and entire news organizations tried to destroy them because of who their father is.

Nothing stuck. Either the “Trump Crime Family” is the able to cover up every crime under the Sun short of murder, or they hadn’t done anything. I don’t claim clairvoyance on the matter, but I do note how continuous investigations – even by prosecutors not investigating any alleged crimes, just investigating to see if they could “find” a crime – have come up empty.

Again, they are all adults, so whatever. Not good, but still, whatever.

Then we get to Hunter Biden…

Hunter Biden is everything leftists accused the Trump children of being and so much more. A druggie, philanderer, corrupt businessman whose sole asset in life is from whose loins he sprang.

Given a cushy job on the board of Amtrak because his father was the patron saint of the bankrupt-without-government-handouts train company. Got another board seat on a credit card company because Joe Biden let them rewrite bankruptcy laws while he was a Senator from Delaware.

We all know the stories about the millions that flowed to Hunter Biden while Joe was Vice President; money that coincidentally flowed from the countries over which Joe had control of U.S. policy.

Can you think of anyone, outside of professional sports or Hollywood, where a drug addicted “manwhore” who has more kids with strippers than merit-based jobs on his resume is showered with millions of dollars?

Strangely, nothing Hunter Biden has done, no matter how the solid evidence to back it up, is newsworthy. He is 51 years old, he only acts like a child.

Actually, he acts like his father’s son. In addition to all we already knew, we found out even more this week. Joe has a long history of casual racism, Hunter freely dropped N-bombs with his lawyer. If he did that with his lawyer while almost 50, what do you think he might’ve been saying around his friends and family his whole life?

It doesn’t matter. Not because it doesn’t matter, but because anyone with the ability to do so won’t bother to ask the President about it. In the 24 hours after the story of Hunter’s racist text messages broke, ABC, CBS, NBC, CNN, and MSNBC not only didn’t mention it on their airwaves, they collectively typed zero words about it on their websites.

These same outlets did everything they could to cover up the Biden family’s corruption exposed on Hunter’s crack-forgotten laptop, with the extent of their pre-election coverage of that story being to call the 100 percent accurate story “Russian disinformation.” Why would they care if Hunter is a racist piece of crap? They’d already made peace with the idea that Joe is a racist and Hunter is a piece of crap; the only shock would be if Hunter weren’t a racist too.

Kids are and should be off limits in politics, but only kids in the sense that they are young children. When that “kid” is a 51-year-old otherwise unemployable crack-smoking, hooker ordering, loser who has been paid millions by foreign entities in countries his father oversaw official U.S. policy for, in industries he had zero experience in, who his father called “the smartest guy I know,” he’d be in prison were his last name anything else. Or, at a bare minimum, his corruption would be newsworthy.