Where Are All the Girls In Boys’ Sports?

Derek Hunter
|
Posted: Mar 14, 2021 12:01 AM
Share   Tweet
The opinions expressed by columnists are their own and do not necessarily represent the views of Townhall.com. 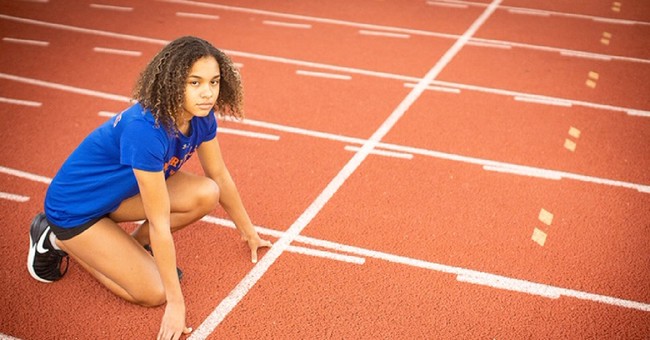 It’s probably a question I’m not allowed to ask, but I honestly don’t care. And the fact that it will upset a bunch of pearl-clutching leftists and gender fascists just makes me want to ask it more, and louder. But with all the talk from the left about transgender rights and how boys who believe they are girls should be allowed to compete in any sport they so choose, why aren’t there any stories of the opposite happening? Where are the girls in boys’ sports?

It’s pretty easy to find stories about boys competing in girls’ sports, particularly track and field events, largely because they tend to win…by a lot. Records are being broken, record books rewritten, and scholarships awarded to boys who “identify” as girls, but has there been one case of a girl identifying as a boy, not only competing in boys’ sports, but dominating?

I can’t find one.

We’re told by Democrats that there is no difference between the sexes, and people should be allowed to compete in sports in the gender with which they identify. If that’s true, if they aren’t simply spouting off talking points cooked up by activist organizations to deflect from the reality of the situation, shouldn’t there be girls in boys’ sports?

If leftists are telling something backed up by science, as they claim it is, then the only option is that every single “trans-boy” in America is disinterested in sports. Every sport, always.

If there are no physical advantages for biological boys identifying as something else, then biological women identifying as boys should easily slide into male sports. Even if they don’t dominate the way boys do in girls’ track, they should at least be on the team and win every once in a while, right?

If there are no differences, shouldn't trans-boys have been awarded some scholarships by now? Wouldn’t that have led to the boys who didn’t win those scholarships and their parents being upset the way the girls who’ve lost scholarships to boys are? Wouldn’t a Democrat lawmaker somewhere in the country be highlighting cases like this the way parents are highlighting the track situation in Connecticut?

That makes the fact that they aren’t all the more curious, doesn’t it?

Of course, how someone “identifies” is irrelevant, in the grand scheme of things. I don’t care how someone chooses to live. I care that Democrats are using the power of government to force others to participate in someone else’s view of the world that is the opposite of reality. Reality is not dependent upon your belief in it, or your willingness to accept it. It just is.

Boys are, by and large, physically stronger than girls. We’re just built that way. If you have an issue with that, take it up with God.

That doesn’t mean there aren’t some women who aren’t stronger than some men, because there are. But we aren’t dealing with hypotheticals or exceptions to the rules. We’re dealing with reality. There is no woman on Earth who can lift as much weight as a man. The world record for deadlifting, for example, is currently 1,104.52 pounds by a guy named Hafthor Bjornsson. The women’s world record is 683 pounds by a woman named Becca Swanson.

People can lament the fact that there are biological differences between men and women all they want, but that lament won’t change the fact that they exist. Because if they didn’t, there would be girls not only trying out for, but doing well in boys’ sports, and they simply are not.

That leads to another question we aren’t allowed to ask, that will have to be saved for another time, but is worth posing here: if gender is a “social construct,” how does anyone know what it feels like to be another person, let alone the opposite gender? The short answer is they don’t. Which then opens you up to a world of possibilities about what is really going on in this wing of the culture war that will have the left freaking out. Good times ahead.