More Blood On The Hands Of Democrats

Derek Hunter
|
Posted: Aug 27, 2020 12:01 AM
Share   Tweet
The opinions expressed by columnists are their own and do not necessarily represent the views of Townhall.com. 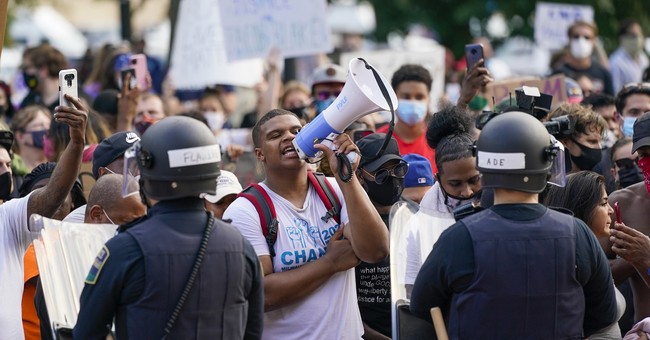 No one likes to say “I told you so” when people die, but sometimes you just have to. I have been talking and writing about the left-wing mob and their violence for years, even wrote a book about it, and it keeps on rolling. Democrats refuse to denounce it or even admit it exists. The murders in CHAZ/CHOP (or whatever the hell it was called when they finally shut it down) didn’t matter, the murders and attempted murder of police officers didn’t matter (no celebrity stepped up to pay for the funeral of David Dorn and Al Sharpton or Ben Crump couldn’t be bothered to show up (no money in it for them)), so why would a couple of more dead people in Wisconsin matter?

They won’t, ultimately. But they might in the short term, only because Democrats can’t continue to pretend those deaths didn’t happen. And, most importantly to Democrats, there is simply no way to deny to continue to deny that all these deaths are on their hands.

As I wrote in my book and in numerous columns, Democrats have been playing a dangerous game – trying to thread the needle between rage and violence. They’ve been trying to keep people angry enough to be motivated to vote for them in the election without pushing them over the line to violence. James Hodgkinson, the Democrat who tried to murder as many Republicans as possible on a baseball field in 2017 because he was convinced by the left that the Republican health care plan would kill thousands of people per year, wasn’t a glitch in the Matrix, he was the first drop of water through the crack in the damn.

Normal people would’ve seen Hodgkinson’s rampage as a warning. But Democrats, who’ve spent the entire presidency of Donald Trump insisting his tweets would cause violence, wouldn’t admit that they actually were what they were accusing Trump of being. How do you fundraise off that?

Instead, they memory-holed Hodgkinson as quickly as possible, with CNN and MSNBC moving off the story before Congressman Steve Scalise was even off life support. The attempted murder was on a Wednesday, the story faded from coverage by the weekend. If a story doesn’t help Democrats, it’s not really a story, right?

The mess in Seattle was celebrated – a “summer of love” – until the bodies started piling up. In Portland, perma-riots were blamed on President Trump sending in federal officers to protect the federal courthouse. Well, they left more than a month ago and the riots continue. You wouldn’t know it by watching or reading the news.

Riots have flared up across the country, always curiously where Democrats have complete control and “progressive” prosecutors pledged not to charge anyone arrested – who says the mob is mindless?

After billions in destruction and countless lives ruined, we find ourselves in Kenosha, Wisconsin, a place most people have only heard of because the name sticks out. After fighting with police, a wanted man with a history with weapons was shot. Was it justified? I have no idea. But neither do any of the people on TV declaring it some sort of civil rights violation or racist attack. All the left knew is it fit the narrative they needed – cop and black guy. It doesn’t matter that more unarmed white people have been killed by police this year (as it is every year). Unless you knew one of those people, there’s no way you’d know their names because their deaths weren’t considered newsworthy. Honestly, the shooting in Kenosha isn’t newsworthy either, but it is narrative-worthy, so it has dominated the news.

The riots that sprang from it? The New York Times headline says it all, “Peaceful marches in Kenosha, Wisconsin, against the police shooting of a Black man gave way to fires and destruction.” As if a peaceful protest was marching down the street in one direction, and fired and destruction were coming down the same street the other way, and the peaceful protesters decided to go home rather than mingle with something completely unrelated to them.

Democrats have been excusing or ignoring violence they inspire for years. At last week’s Democrat Convention, not a single person acknowledge any of it, even as innocent people were attacked and new buildings burned every night. Instead, they praised those committing those acts of violence as the heirs to the Civil Rights Movement. It was, for lack of better family-friendly word, sickening.

It also didn’t go unnoticed by the public.

To the extent that any establishment news outlet has covered the violent areas, it’s always during the day. Correspondents on the street in daylight describing what happened, with carefully selected b-roll footage from the night’s rampage playing briefly in packages over narration downplaying it. That footage is not shot by those highly paid news crews, but by independent journalists and conservative outlets whose reporters are on the streets covering what is really happening. (Townhall’s Julio Rosas deserves awards for what he’s doing, but he won’t even get acknowledgement.)

Remember the Ferguson riots over the bogus Michael Brown killing? MSNBC and CNN sent anchors, not just reporters, there to do their shows on the scene. Now they barely mention what is happening, and only do so to stoke the flames with narrative-approved guests from the safety of their New York studios. People are dying, lives are being ruined, and Rachel Maddow and the gang whining about mailboxes being refurbished.

Now it’s biting Democrats where their heads reside. Thanks to social media and conservative websites showing fresh video nightly of the violence, it doesn’t matter what the “big boys” do. People talk. And Americans who don’t like what they’re seeing are opening the eyes of their friends who haven’t been paying attention.

Glassy-eyed Joe Biden’s convention speech was bad enough on its own, but through the lens of the reality he ignored or is unaware of (you can’t really tell with him), it looks even worse. Now media rumblings forced Biden has to talk about it, to sort-of condemn it. But it’s too late. Condemning violence only after Don Lemon says you have to or else it will hurt you in the election would be seen as sincere as when I tell my 3-year-old daughter to apologize to my 1-1/2-year-old for pushing her and taking a toy away – she does it, but she doesn’t mean it. At least my daughter has the excuse of not understanding the concept yet, Democrats don’t have that (except maybe Joe).

Every Democrat, from the personalities masquerading as journalists to the Governor of Wisconsin (who was asked by authorities is Kenosha for 750 National Guard troops and only sent 250, then rejected a White House offer to make up the difference the day before the killings), to Joe Biden who remained mum on the subject as he spoke to the nation, has blood on their hands. No amount of spin, no amount of squealing about the post office or Russia, no whining about a Trump tweet will wash it off.