Democrats and the Great ‘Mailbox Conspiracy’

Derek Hunter
|
Posted: Aug 25, 2020 12:01 AM
Share   Tweet
The opinions expressed by columnists are their own and do not necessarily represent the views of Townhall.com. 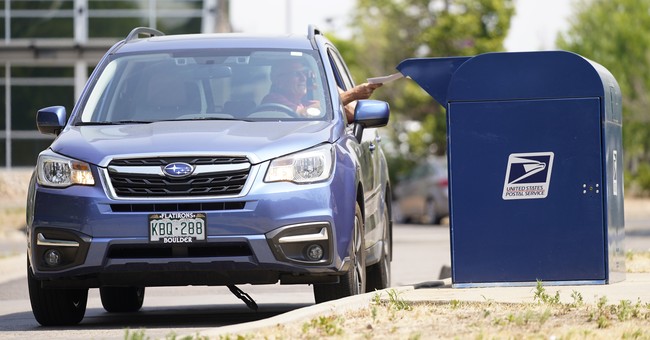 Life is about priorities. That’s an important lesson everyone should learn. Our time on the planet is limited, what you choose to spend it on says more about you than almost anything else. Democrats, in the midst of a pandemic, have chosen a political show over you.

The post office is going broke. Were it not for a string of continual bailouts, the U.S. Postal Service would have closed its doors years ago. Were it a publicly held company, the people who run it would likely be in jail.

Meanwhile, the economy is shut down and millions of Americans are worried about how they’re going to pay their basic bills.

Facing these realities, the House of Representatives went on vacation. They normally take the month of August off, this time they gave themselves six weeks.

Not having a COVID relief bill didn’t change their vacation schedule, Speaker Nancy Pelosi wants to keep her majority and not having a bill that will help people from the damage government has imposed has to be made up for with at-home lies. But a political scam designed to scare gullible Democrats into thinking President Orange Man Bad is trying to steal the election? That’s worth an emergency session.

You really have to wonder how dumb someone has to be to believe this stuff.

The Postal Service is funded through next year already. Even if they blow through all their cash by the end of the next fiscal year, the odds of them doing so by November would require incompetence at a level that, well, only government could do. But they won’t.

Still, people are Hoovering up this conspiracy theory liked Hunter Biden on a bender. “Mailboxes are disappearing!” “Sorting machines are being decommissioned!” And whatever else these lunatics burp out next.

When your business model is the steam engine, the internal combustion engine is eventually going to impact your bottom line. That’s not an evil plan, that’s reality.

Bailouts aren’t going to save the post office in its current configuration or else they would have worked by now. This ain’t their first rodeo.

But Democrats want to force everyone to vote by mail, not out of concern for the pandemic – if they were concerned about that they wouldn’t be on vacation. No, they want to force voting by mail because the rules that govern the vast majority of election issues don’t apply to voting by mail.

Everyone who has voted has run the gauntlet of last-ditch lobbying by campaigns as you walked up to your polling place. There are laws that limit how close those people can get to the doors at polling stations. There are no such laws keeping them away from your front porch.

Anyone who’s watched the news out of Portland, Seattle, Denver, etc., knows the leftist mob has no respect for the law, election or otherwise. As a vote-by-mail election approaches, it’d be easy for people currently trying to set buildings on fire to pour lighter fluid into mailboxes in heavily Republican areas. There’d be no way to know whose ballots had been torched, no way to recast those votes. Do that enough times and you can impact results.

We’ve also seen how these mobs harass anyone they deem not “woke” enough. Do you really think these fascists would hesitate to do the same when it comes to voting?

Democrats couldn’t bring themselves to even mention the violence happening by their Brownshirts, not even the beatings of innocent people. Do you really think they’d give a damn if probable or suspected Republican voters found themselves in their crosshairs? They haven’t even acknowledged the attacks on police officers and the attempts to injure or murder them. Compared to that, who the hell are you?

So-called news organizations are reporting years-old photos as new, standard mailbox refurbishing as a plot against democracy, while ignoring a Black Lives Matter activist trying to kick a 30-yard field goal with a defenseless man’s head. Given that reality, what chance do you have?

Life is about priorities – it shows you who people are. This is who Democrats are. And when someone shows you who they are, believe them.