Derek Hunter
|
Posted: Jul 23, 2020 12:01 AM
Share   Tweet
The opinions expressed by columnists are their own and do not necessarily represent the views of Townhall.com. 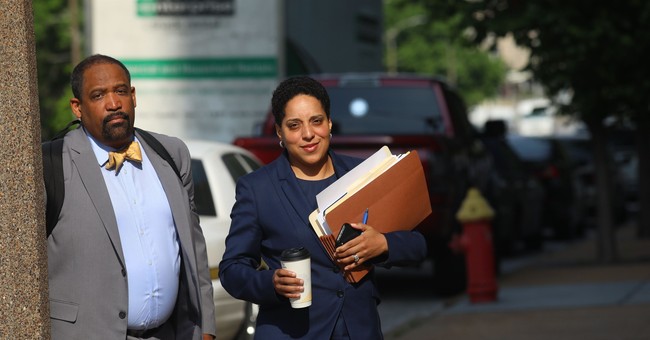 Leftists have always hated law enforcement. Maybe it’s because they simply don’t like police, or maybe it’s because they desire to be the ones who decide who gets punished and for what. The riots exposed something liberals aren’t ready for the public to be aware of, at least not fully – that elected Democrat mayors, prosecutors, district attorneys, and attorneys general are abusing their power to do an end run around state legislatures and create law themselves.

If there’s one stupid idea that unites Democrats and Republicans it’s the idea of “criminal justice reform.” The idea behind it is that there are too many people in prison in the United States and something must be done about it. OK, fine. But the problem isn’t that we have too many criminals in jail, it’s that too many people are breaking the law. If people stopped breaking the law, the prison population would shrink.

That, however, isn’t the real problem facing the criminal justice system, it’s the abuse of discretion, prosecutorial or mayoral.

There’s nothing inherently wrong with the concept of prosecutorial discretion, which basically means the prosecutor can consider circumstances surrounding the commission of a crime when it comes to whether or not to pursue charges or what charges to pursue. Someone robbing a bank because their family is starving is different than someone robbing a bank because they simply wanted the money held in it. Discretion would allow for a plea deal for the former while pushing for the maximum for the latter.

This leeway is common in the legal process. What isn’t common is prosecutors refusing to pursue charges against everyone arrested in a riot.

To be arrested in a riot, especially in 2020, you aren’t just a bystander minding your own business. Besides, if you’re in a crowd that starts looting stores and throwing bricks at police and you don’t leave immediately, you’re in on it. Taking out your iPhone and streaming the violence to your Instagram page doesn’t transform you into a journalist, it makes you the creator of evidence.

That said, when people are arrested for looting, property destruction, or assaulting police officers they should be prosecuted to the fullest extent of the law. If examples aren’t made of the truly detestable you’ll only get more detestable actions.

Laws against rioting, looting, and assault exist for a reason – because the people, through their representatives in government, have decided those actions are unacceptable and should be punished. Now, the people whose job it is to follow through on those laws, to enforce them and punish the guilty, are choosing not to.

There has been no change in the law, rioting isn’t suddenly legal, but you’d never know it by the blanket dismissals of charges against those arrested. This isn’t discretion, it’s abuse.

A similar abuse of power is taking place in Democratic cities as mayors order police to stand down in the face of riots. Commanding police officers to take a physical pummeling and suffer injuries because the mob is viewed by elected Democrats as an asset is unacceptable; it’s an abuse of power. Yet this has happened from coast to coast.

If the law doesn’t apply to everyone, if some people are above it, there really is no law. We will have transformed from a free people to a people living at the whims of local dictators. Run afoul of the politics of those in power and face their wrath. Think wrongly on a sliding, situational scale and you might find yourself with the entire power of the state coming after you.

Mark and Patricia McCloskey discovered this when the activist circuit attorney Kim Gardner, who’d announced she wouldn’t pursue charges against rioters in St. Louis, charged them “with felony unlawful use of a weapon” for protecting themselves and their home from the liberal mob that destroyed private property, trespassed, and threatened the couple. They didn’t shoot anyone, simply told them to move along while being ready for the very real prospect that they wouldn’t.

Gardner isn’t charging any of the mob for trespassing, which they unquestionably did, she’s going after the people who were ready to defend themselves. Her sympathies are as obvious as her bigotry.

The McCloskeys have the means to defend themselves, the Missouri attorney general is moving to get the case dismissed and the governor has said he would pardon the couple. But imagine if there wasn’t video footage of the real lawbreaking. Imagine if it were you – targeted because you were a useful foil for a political hack looking to make a name for herself. This isn’t discretion, it’s abuse of power.

The people entrusted with enforcing the law are ignoring and abusing it to protect their political allies and punish their enemies. It’s something you’d expect in the Soviet Union or Nazi Germany, so it’s not completely shocking that their ideological heirs would do it too. What is shocking is how little concern there is throughout the entirety of the Democratic Party about it. Makes you wonder whose side they’re on. Or, more to the point, it makes you realize whose side they’re on.