Derek Hunter
|
Posted: Feb 27, 2020 12:01 AM
Share   Tweet
The opinions expressed by columnists are their own and do not necessarily represent the views of Townhall.com. 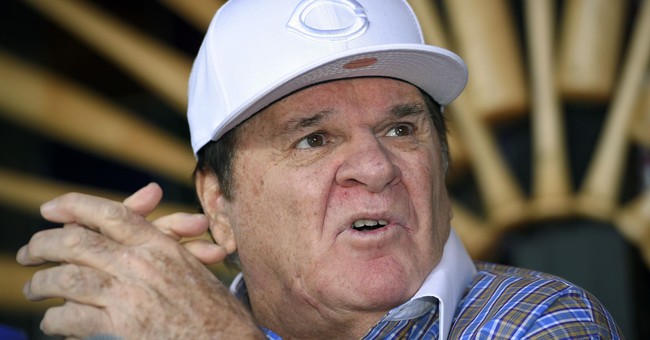 I’m a big fan of accountability – if you break the rules there has to be consequences, or else there are no rules. But I’m also for sanity and proportional punishment, which is why I think it’s time (well past, to be honest) to lift the lifetime ban on Pete Rose and allow him into the Baseball Hall of Fame.

Pete Rose bet on baseball, he also lied about it when caught. All of this is well known and not irrelevant, but the price for that has been paid.

Rose is baseball’s hit king, slapping out 67 more hits and Ty Cobb and 1,000 more than the nearest active player. By any unit of measure, Pete is a hall of famer. Yet he remains on the outside looking in.

Last week, Rose applied, once again, for reinstatement. Given the fact that no one from the steroid era or the recent electronic sign stealing scandals has been banned for life, he has a strong logical case for lifting the ban. But baseball is a private business, free to set its own rules and standards, so there is no guarantee of anything.

Lawyers for Rose, in filing their latest petition, correctly noted, “Given the manner in which Major League Baseball has treated and continues to treat other egregious assaults on the integrity of the game, Mr. Rose’s ongoing punishment is no longer justifiable as a proportional response to his transgressions.”

None of this is to diminish what Rose did, it was against the rules and threatened the integrity of the game. But he did it decades ago, a life sentence for one of the greats is cruel and unusual.

Rose hasn’t helped his case by changing his story and monetizing his infamy with “I’m sorry I bet on baseball” signed balls, but if character were a factor in enshrinement in the hall, the hall would be nearly empty.

What happens on the field should be all that matters – individual performance. The Halls of Fame are not about team or world championships, they are about individual achievements, and Rose holds a record unlikely to be broken, at least for decades. How baseball can justify is exclusion for life seems more personal than anything else.

By many accounts, Rose isn’t the easiest person to get along with and can be difficult to be around. So what?

Babe Ruth chased women, couldn’t be bothered to remember anyone’s name, was perpetually late for games, ate and drank too much, along with all manner of other traits that would make him the last person you’d trust to feed your dog while on vacation, let alone think worthy of celebration. But he hit the hell out of the ball.

Mickey Mantle worked as a casino greeter for a time in retirement and was banned. Mantle did it to make money to cover the cost of cancer treatment for his son, yet baseball banned him anyway. I question the wisdom of this, not the authority. Once he both left the casino job he was reinstated and all was forgiven. The punishment, dumb and heartless as it was, fit the so-called crime.

At age 78, and speaking honestly, Pete Rose isn’t going to be around much longer. To deny him something he’s clearly earned, not through stealing signs or taking performance enhancing drugs, can only be attributed to spite at this point.

The Hall of Fame itself could ignore the ban and allow Rose’s name on the ballot, but the last time Rose appealed for reinstatement (and was denied), in 2016, they said they’d abide by whatever the wishes of Major League Baseball were. No one wants to step up and give the man his due.

Given how the bar has been lowered for entry to the Hall of Fame (I don’t want to name names because they were all good players, just not great), it’s high time they allow someone who clearly and unequivocally clears the bar of greatness as a player.

There is no more line for enshrinement. It used to be 3,000 hits, 500 home-runs, 300 wins for pitchers, or other milestones were needed to guarantee entry. Those standards aren’t reached anymore, at least not very often. So lesser players now make the cut. But 4,256 hits is a number greater than the average player with a good career will amass in games played and it deserves recognition.

Pete Rose will likely never win a spot in the Off-The-Field Hall of Fame, but there is no doubt he earned one in baseball for what he did between the first and third base lines. And he should get it while he’s alive; he earned it. It’s time for Major League Baseball to step-up and stop blocking him from the space he truly deserves.