Derek Hunter
|
Posted: Nov 12, 2019 12:01 AM
Share   Tweet
The opinions expressed by columnists are their own and do not necessarily represent the views of Townhall.com. 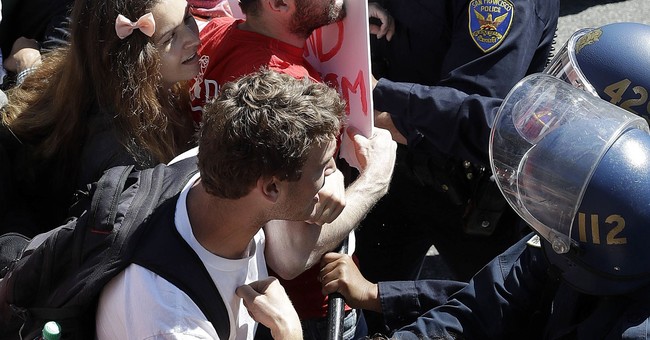 There was a time when any candidate for any office with a background in law enforcement would proudly talk about their record and make it a cornerstone of their campaign. In the last few years, however, the Democratic Party has not only moved away from this former truth, but they’ve actually embraced an anti-police hatred that is dangerous and destructive.

It started on a large scale in Ferguson, Missouri, with Michael Brown. This was the guy, who all the evidence showed was the aggressor who went after officer Darren Wilson, who was shot and killed while charging the officer for round two. The death of Freddie Gray in Baltimore, Maryland, sped up the process. From there, no incident involving police was too insignificant to make national news, as long as the “victim” was black. White or Hispanic confrontations with police, regardless of fault, don’t register.

From this, the “police are racist and hunting young black men” mantra was born. And the birth of a liberal narrative is the only birth they don’t want to abort.

It led to the “Ferguson Effect”; police doing the bare minimum required of their job because they know if things go sideways, even if it’s not their fault, politicians and the media will demonize them if the circumstances fit their narrative.

This caused countless lives to be damaged, as police defensively ignored obvious signs of crimes because they weren’t called in to dispatch. But it’s not the only damage liberal policies and attitudes have done.

“Confronting” police – which is the polite way of pointing out people being complete a-holes to cops – is now a point of pride on the left. Why not? When you’ve been told police are racist monsters who start their shifts hoping to be able to harass minorities, why wouldn’t you view them as the enemy?

In the last few years, videos have gone viral countless times with some leftist screaming in the face of police, calling them every name you can imagine, launching projectiles toward them at a tantrum described as a protest, and worse. None were followed by mass condemnation in the media. Antifa, the Brownshirts of the Democratic Party, regularly attacks police and everyone else and is met with praise from the likes of CNN.

No interaction with police is beyond turning into an outrage. The latest happened in feces and needle covered streets of San Francisco.

A man reported as “D. McCormick” was found to be eating on a commuter train, which is against the law. Rather than simply acknowledge he was wrong and apologize, an argument ensued with a string of profanities tossed at the officer. Of course, it was filmed.

Anti-Semitic professor and cable news talking head Marc Lamont Hill tweeted, “Police stopped this man for eating a sandwich. How can anyone defend this?” Homophobic MSNBC host Joy Reid declared, “We really need to address the overpolicing of people of color in this country. Seriously.”

The problem isn’t over-policing and has nothing to do with race, it has to do with what most problems have to do with – liberal lawmakers.

Democrats love creating new laws. As the saying goes, whatever they don’t want to ban they seek to make mandatory. And there’s a problem with rodents in big cities, people don’t want rats on public transportation, so they saw an opportunity to ban eating food. McCormick was unambiguously breaking the law. But because of the narrative the left constructed, aside from the liberal outrage, the incident “sparked an independent review.”

The officer could face discipline, not the lawbreaker dropping f-bombs on the cop. By the way, he was arrested for resisting arrest, not for the eating. His attitude got him arrested. Had he not been a jackass he likely would’ve just been warned.

But the main point is the police officer was enforcing the law. Elected officials, who will probably exploit the video to further advance their fraudulent narrative, passed the law. If they didn’t want it enforced, why did they pass it?

That question could be asked of every law Democrats gleefully cheer the breaking and ignoring of. (Immigration comes to mind.) Liberals decriminalize crime and criminalize enforcing the law They pass laws so they can tell voters they’re “doing something” about whatever any particular problem is, then condemn it when the people charged with enforcing their laws actually does their job. Police take the heat, politicians and media figures condemn the police, the angry mob gets angrier…and they vote, which is why the cycle exists in the first place. Lather, rinse, repeat.

Democrats are responsible for most of the problems they claim exclusive domain over solving. Keep that in mind next time you see one of these outrage-spirals. And thank a cop. Lord knows liberals won’t.