Derek Hunter
|
Posted: Sep 19, 2019 12:01 AM
Share   Tweet
The opinions expressed by columnists are their own and do not necessarily represent the views of Townhall.com. 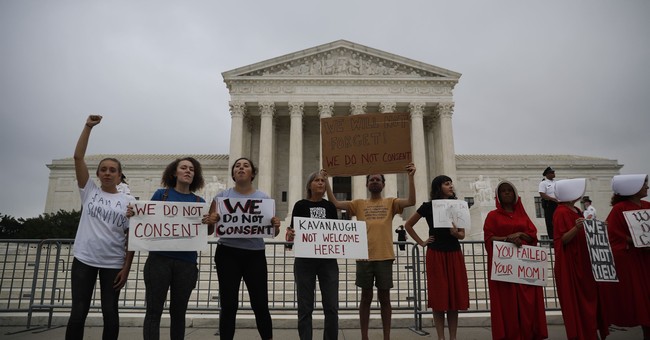 During the confirmation hearings for Supreme Court Justice Brett Kavanaugh, dimwitted Democratic Senator Mazie Hirono famously demanded men “Just shut up and step up. Do the right thing for a change.” Hirono continued, bastardizing the concept of justice in the United States, adding, “Not only do women like Dr. Ford, who bravely comes forward, need to be heard, but they need to be believed. They need to be believed.”

“They need to be believed” morphed into the progressive hashtag “#BelieveAllWomen” and became the mantra of activists seeking to scalp Kavanaugh for allegations everyone supposedly involved denied occurred.

The American people didn’t believe Christine Blasey Ford because there was no reason to believe her. She didn’t remember where she claimed Kavanaugh had assaulted her, she didn’t remember how she got there or home from an area miles away from where she lived, and she wasn’t even sure of the year. The only details she claimed to remember was the names of people at the party, all of whom, including her close friend, said it didn’t happen.

Still, Democrats claim to believe her because all women must be believed.

They why don’t Democrats believe the two women who have accused, on the record and in public, the Lt. Governor of Virginia of rape? Justin Fairfax is still in office, is even considering running for Governor because the allegations have “raised his public profile for good.” Who knew being accused of rape was the key to success in the Democratic Party? (Maybe Ed Buck, Jeffrey Epstein, and people named Clinton, but other than that…)

There is no pursuit of “justice” for the women accusing Fairfax, no drumbeat for resignation, there are barely any news reports about it anymore. Hirono did tweet about it, after the second accuser came forward, saying Fairfax should resign on February 8th, but not since.

“With this second serious and credible allegation of sexual assault, Justin Fairfax should resign. This is not a partisan issue,” Hirono said. But why did it take a second accuser, if all women are to be believed? Why have all the Democrats who, when the story was in the news, called for Fairfax to resign, gone radio silent after it faded?

Also, why has it faded? The women haven’t been debunked or exposed as frauds, the media just lost interest as Democrats stopped caring and Fairfax refused to leave. This was during the time Virginia Democratic Governor Ralph Northam and Democratic Attorney General Mark Herring were both being exposed as having worn blackface in the '80s. If those three men were to have resigned, Speaker of the Virginia House, Republican Kirkland Cox, would’ve become governor. Democrats weren’t about to cede power to Republicans simply because the alternative was to embrace racists and an alleged rapist. So the story died.

All women may be believed, but that doesn’t mean Democrats have to care when it can harm them politically.

Now we come to this week, when two New York Times reporters, neither of whom cover the courts or confirmation hearings (one covers culture, art, and architecture, and the other Wall Street), released a book about Brett Kavanaugh. In their launch, they casually dropped a bomb about another alleged accuser.

While lionizing Deborah Ramirez for the trauma she claimed as a non-super wealthy, Hispanic woman at Yale in 1983 (liberals love subdividing people and making them victims) who claimed Kavanaugh exposed himself to her in a crowded room at a party (something people at the party and in the room don’t seem to remember), they casually tossed in another woman, an unnamed woman, who they said suffered a similar fate at another party.

The only problem is the new woman, who didn’t want to be named (but they named her in their book anyway, because journalism) didn’t talk to them. Neither did the man, a liberal activist named Max Stier, who allegedly witnessed the exposure.

Instead, they got their information through a game of telephone – talking to people who claim to have heard the story from Stier.

With this weak, unconfirmed information, none of which was firsthand, they printed it anyway. They said Kavanaugh’s “friends pushed his penis into the hand of a female student.”

Putting aside the odd logistics of how multiple people would be involved in that, in a crowded room with no one noticing, the woman herself, who the writers in interviews call a “victim,” said she has no memory of it. If someone dropped their junk in your hand, especially if multiple people were required to make it happen, you’d likely remember it. She doesn’t, and she doesn’t want to be involved.

From this flimsy, laughable allegation, new impeachment talk has been launched. Democrats don’t care that it wouldn’t be accepted as a valid cite in a high school term paper, or that the “victim” denied any knowledge of it, they want Kavanaugh removed from the bench.

Again, what happened to “believe all women”?

Democrats stopped believing women who’ve accused a Democrat of rape, and refuse to believe a woman who says something did not happen.

The fact is Democrats don’t care about these women any more than they care about climate change or shooting victims. They are opportunities to advance their agenda, nothing more. Disposable vessels with momentary value to score political points and keep their base outraged. This isn’t about “justice,” at least not in any way normal people would define the word, it’s about the next election.

They still demand we “believe all women” because it’s catchy and resonates with liberal voters. They just aren’t willing to do it when those women have things to say they find inconvenient. Some women are more “believable” than others, it turns out.