Derek Hunter
|
Posted: Sep 05, 2019 12:01 AM
Share   Tweet
The opinions expressed by columnists are their own and do not necessarily represent the views of Townhall.com. 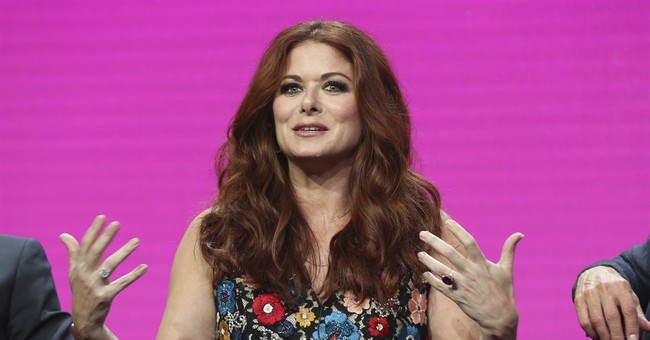 I’m not a fan of tossing around the word “Nazi.” Unlike our friends on the left, I know history and prefer to, when possible, keep political discussions civil and on the topic at hand. But they don’t, on either of those points. Either they are intellectually incapable of discussion beyond a Neanderthal “fire bad” level, or they are simply of poor character and profoundly dishonest, and dare I say, evil people. Likely both.

The journey matters less than the destination in this case, because the destination, whichever path is taken to get there, is profoundly dangerous and wholly un-American. This was on full display this past week, from coast to coast.

Out on the left coast, actors Eric McCormack and Debra Messing, in the tradition of their ideological forefathers, want a list of anyone in Hollywood who happens to support President Trump.

McCormack tweeted a Hollywood Reporter story about a fundraiser the Ppesident is attending in Beverly Hills, asking the outlet to “kindly report on everyone attending this event, so the rest of us can be clear about who we don’t wanna work with.” Messing followed shortly thereafter with a similar request.

The two who, were it not for the luck of having an old hit TV show and “mailbox money” thanks to syndication, would be struggling actors appearing in cameos in forgettable straight-to-cable movies (seriously, check out their IMDB pages and see if you’ve ever heard of anything else they’ve done) would be willing to work with anyone in order to make ends meet.

But the success they did have went to their heads, and their millions allow them to advocate for blacklisting people they view as their enemies for thinking differently than they do. They’re Hitlerific!

Thanks to the Gestapo tactics of the two lead actors on “Will & Grace,” they now have crew members and co-stars terrified their thoughts will be uncovered.

That’s their real goal – conformity or silence. At least while they’re out of power. Should they ever gain power…the sky is the limit.

But McCormack and Messing aren’t alone in the Hollywood-Holier-Than-Thou crowd. Another marginal talent living off memories and royalties of their past work is Alyssa Milano. She’s “fighting” on behalf of people who didn’t ask her to fight for them, who don’t need or want what she’s “fighting” for. She, like Tweedledum and Tweetledumber, know what’s best for others. After all, they watch MSNBC.

Milano tweeted, “I know some of you dislike me. But understand...I’m fighting for you, too. That you might be free to be you. That you might not have to work so hard to put food on the table. That you can control your own destiny free from discrimination. That you can live...just live.” Essentially, “Shut up, you ingrates, socialism is for your own good.”

The collective IQ of these three is about that of the average person’s shoe size, yet their ability to terrify people they work with is unlimited. None are A-list actors, but they’re likely the biggest name on any project they’re hired for. And you don’t work on a set very long if the “star” wants you gone. Producers just make up an excuse and you’re gone. A nice, clean kill.

On the other coast, Hollywood for ugly people, the anti-Republican forces claimed two more scalps.

Some “journalist” decided to violate the concept of “off the record” and tell people what the president’s personal assistant allegedly said over a night out with reporters. Why Madeleine Westerhout trusted reporters in the first place is a testament to the nature of power in Washington. If you are not one of them, they are not your friend. No matter how nice they may be, you are a vessel to advancing their agenda and careers, nothing more. She learned that the hard way by reportedly saying the sorts of things everyone says about their boss at some point and finding it in print soon after.

Another fascistic guttersnipe with a press pass, a guy named Ben Penn, had himself a “scoop!” He found an anti-Semitic Facebook post by a Trump appointee in the Department of Labor. Only it wasn’t anti-Semitic, it was a sarcastic joke mocking anti-Semites. You’d have to have suffered a serious closed-head injury to not see that, or be a true-believing Brownshirt.

Just a few days after journalists were up in arms over the idea of Trump supporters exposing past racist and anti-Semitic social media posts by journalists, saying it was a threat (somehow) to democracy, another progressive Jihadi claimed his scalp and the target of this Bloomberg labor and employment “reporter,” a man named Leif Olson, was forced to resign over the lie.

In his acceptance speech for accolades and his Iron Cross, he told the bloodthirsty mob, “Lost in all of this is that Olson was part of a team of political appointees tasked with the heavy lift of drafting wage-hour regulations that are high priorities for Trump White House, business community. They're now down one adviser.” It was a scalp with purpose, and he, and his bosses at Bloomberg, are proud of it. (UPDATE: After this column was written, Olson got his job back.)

It’s important to remember, the left is out for blood. They are not your friend. If you refuse to conform, to get in line and shut up, they will happily destroy you. This is what they do when they’re out of power, just imagine what they’d do if they won.