Sanctuary Cities Should Welcome Illegals, Unless Liberals Are Lying

Derek Hunter
|
Posted: Apr 14, 2019 12:01 AM
Share   Tweet
The opinions expressed by columnists are their own and do not necessarily represent the views of Townhall.com. 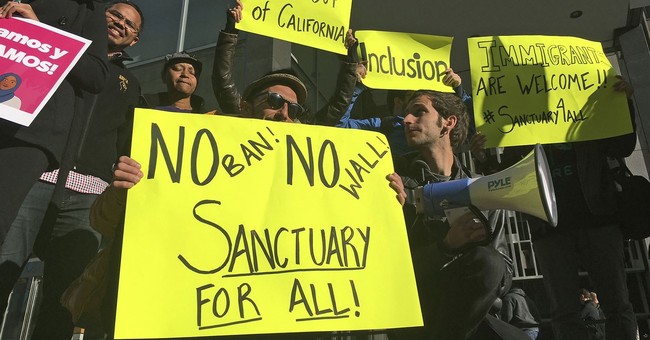 It was framed as a big scoop – the Washington Post headline blared, “White House proposed releasing immigrant detainees in sanctuary cities, targeting political foes.” “My God,” the blue checkmark brigade on Twitter gasped, “how dare the President of the United States even consider doing such a horrible thing?” But why? If liberals have been honest with the American public for the past few years, they not only should welcome every illegal alien they can find to their refuges, they should be thanking Donald Trump for his kindness to them.

Watching the story unfold was a bit odd, if you’ve paid even a little bit of attention to the debate over illegal immigration these last few years. Supposed journalists and “open-minded” progressive Democrats who’ve sworn six ways from Sunday that illegal aliens are our moral betters were outraged. Words like “dumping” and “punish” were used to describe the idea of releasing illegals, required by law to be set free, in jurisdictions that have laws protecting illegals from the consequences of their actions. You’d think a few more would be welcomed, considering those laws are designed to make them feel welcomed in the first place. You’d be wrong.

Almost to a person, anger was the order of the day from the left. But why?

Why wouldn’t cities like San Francisco welcome as many illegal aliens as possible? After all, we’ve been told by these very people, leaders in and from these sanctuary areas, that illegals commit fewer crimes than Americans and are an unbridled boon to the economy. Opposing their relocation would not only be missing an opportunity to lower the crime rate, but to bring about economic growth unrivaled since post-World War II.

Of course, they were lying to us. Only the most faithful, the people for whom MSNBC is too “fair,” ever really believed those lies. Everyone with more IQ points than fingers recognized these leftists were relieving themselves on the public while telling people it was raining. Now their bluff was called, and they folded like a cheap suit.

Still, the President should follow through on this idea. Make Democrats make the case against it. Let them explain how it’s “disrespectful” somehow and to whom, as Nancy Pelosi said.

The Mayor Oakland, California, Libby Schaaf, who made news last year by tipping off illegal alien criminals to ICE raids, shared her sentiments, which are common among the left. About the Post story, Schaaf said it was “(a)n outrageous abuse of power — using human beings to settle political scores. Our President wants to punish everyone; those who seek sanctuary in our country and those who provide it.”

Schaaf went so far as to call the idea “illegal, immoral, undemocratic, and racist,” though didn’t explain how. Granted, no one wants to move to Oakland, but how it’s racist remains a mystery.

In her local TV appearance, Schaaf repeated the standard lie that illegal immigrants “actually makes our city better and safer.” If that were so, why is she so outraged? Shouldn’t this idea be greeted with tickertape parades? Oakland isn’t exactly a safe city, the opportunity to reduce crime by importing people with higher moral character than the average American should be a net-plus, right?

The truth is illegal immigrants are a net drain on society. These aren’t people with PhDs and piles of seed money looking to create the next great start-up, they’re largely people who can’t speak English, with little to know education; many are illiterate in their native language. They will become the servant class for the liberal elite and their wealthy donors. More importantly to the left, they will be dependent on government.

Illegals, if liberals get their way, will count in the census. That means more federal money and continued overrepresentation in Democratic states. While Democrats support these things, they prefer it to happen under the radar. They don’t like it when crime and depressed wages can be traced to their policies. They don’t like it when people notice they’re picking up the tab for emergency rooms are flooded with non-English speakers, or schools have budget shortfalls and low test scores from the added cost of teaching kids who don’t speak the language. They hate reports gang activity and the inhuman violence of MS 13. They call all of these things racist to point out because there is no legitimate answer they can give.

But it’s never wealthy liberal areas impacted in these ways. The people inflicting this on their fellow Americans remain insulated from the consequences. It’s poor, mostly minority kids who suffer. It’s also poor minority kids who are inundated by these same liberal politicians and community leaders with the soul-crushing mantra that “the system is rigged against them.” They never mention how the system got “rigged,” they just attack Republicans and police as racist.

Of course, none of this matters. Minds will not be changed by words, no matter how true, from outside observers. This is the type of change that has to be realized from within. Bringing in more illegal aliens in the sunlight will shine some uncomfortable light on those problems, which is what liberals fear most.

Sunlight is the best disinfectant, and the calling of bluffs is as old as time. Both of those would be engaged if the Trump administration followed through with the plan reported Friday. That’s why liberals so desperately oppose it.