Derek Hunter
|
Posted: Oct 25, 2018 12:01 AM
Share   Tweet
The opinions expressed by columnists are their own and do not necessarily represent the views of Townhall.com. 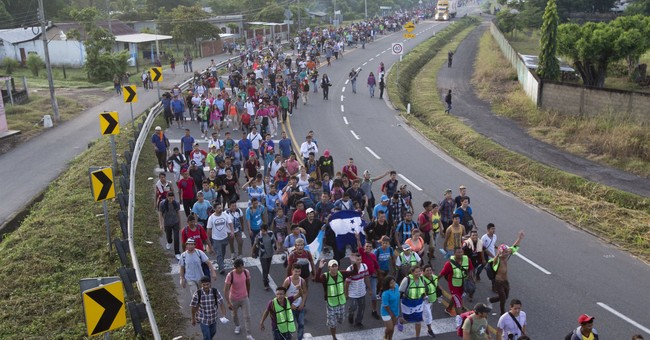 Right now, there are untold thousands of aspiring illegal aliens from Guatemala, Honduras, El Salvador, and countless other hellholes in South and Central America marching thousands of miles through Mexico hoping to be greeted by warm hugs and free legal representation from liberals at our southern border. It’s called a “caravan,” because “invading horde” is a little too “on the nose” for the liberal media to report. Whatever you call it, it has to not only be stopped, they have to be prevented from happing again in the future. But how?

There are obvious ways like building a wall and streamlining the deportation process. But there are more, less obvious ways, too. Here are some suggestions.

We can incentivize Mexico to care.

Mexico doesn’t care that tens, if not hundreds, of thousands of illegal aliens march through their country on the way to the US every year, and they really have no reason to. If they were stopping in Mexico they’d be tossed out like yesterday’s garbage, as Mexico actually enforces its immigration laws. Since they aren’t, and it’s a way to stick a thumb in the eye of President Trump, the government looks the other way.

But we have an advantage. Mexico is dependent upon the United States for a great many things, none more important than the money Mexican nationals here legally and the millions of illegal alien Mexicans send back home to their families every day. We can tax that. Hell, we can stop it. That would get the government’s attention and help prevent the invaders from receiving a 1700 mile police escort.

We can punish people who hire them.

Democrats are never going to care about the invasion, they see only potential voters in the uneducated and illiterate in their own language masses (to say nothing of being able to communicate in English) and that’s all they care about. Voters have to make them care. Voters also have to make squishy Republicans care.

Both parties support illegal immigration, Democrats just do it uniformly while only some Republicans are on board. A bipartisan cadre of rich donors love cheap labor, and people who feel more than they think like to pretend they’re being compassionate. But artificially depressing wages isn’t compassionate.

Serious fines for employers who hire illegal aliens, and I’m talking company-threatening fines, would make work nearly impossible to find and dry up a major part of their incentive to be here. This would likely have to be coupled with work requirements for welfare recipients, especially in times of full employment like now, but those should be in place anyway.

By making hiring illegal aliens so unattractive, and dangerous, they’d have little to come here for.

Your geography of birth should have nothing to do with citizenship, and it was never meant to. Liberals bastardized our laws to create this mess, it’s time to fix it. It may sound heartless, but I don’t care. I care about Americans first and anyone else a distant second.

American taxpayers are on the hook for a fortune every year just covering the cost of births of illegals, and “birth tourism” from Asia, particularly China, is a very real thing. It’s crazy, and no other nation on the planet has such a stupid system. It has to end.

The US has to take a more active role in Latin America.

The carrot and stick approach can be very useful here. We send a lot of money south in foreign aid. That blind system should end. If governments are corrupt, cut them off; if they won’t control the chaos within their own borders to the point that people flee en masse, cut them off. When the Soviet Union was a threat it might have made sense to deal with despots. But the Soviet Union doesn’t exist anymore. If we’re going to offer aid it must come with strings attached.

We need to shun corrupt leaders and embrace good ones. If the people of the region see that positive change is possible maybe they’ll stay and fight for it in their countries (especially if we make coming here unappealing).

Right now, Brazil is sitting at a crossroads. They will either go further down the leftist corruption path or elect a reformer who will stand up to corruption. The election is this weekend, and its outcome can either serve as an example or a cautionary tale. Candidate Jair Bolsonaro could be the Donald Trump of Brazil – brash and blunt, promising to fight the corruption that has plagued their government and the region, while pledging to end the violence that has gripped the country for decades.

Whether he succeeds or not will have to be seen, but we should embrace Bolsonaro as an example of what countries in the region should be doing. We can’t fix their problems, but we sure can help leaders who are willing to fight to fix it themselves.

The U.S. serves as an escape hatch for hellholes in Latin America, our virtual open border relieves pressure on corrupt governments because it gives concerned citizens a place to go. That escape hatch provides a disincentive for people to stay home and fight for themselves and their country. We need to seal that hatch while offering help to those willing to fight for a better life at home.

It won’t be easy, institutional corruption is never easy to defeat. But Brazil may be on the verge of proving it is possible. If Bolsonaro wins and sticks to his word, the United States should embrace his administration and work with people in other countries based on the Brazil model. By making the continent a better place to live and do business, “caravans” would go the way of the Dodo.

The invading horde isn’t running here as much as they are running away from what President Trump once correctly referred to as “s-hole countries.” But those hordes clearly have national pride, why else would they march proudly with flags of the nations they are fleeing? By combining disincentives for breaching our sovereignty with the prospect of help in reforming their home countries, coupled with nudging Mexico to help, we can stop future invasions before they start. That would be win-win for everyone, except the political mega-donors for both parties and the Democratic Party who will have wasted money printing voter registration forms for when amnesty was granted, which would make it a double win for the American people.

Derek Hunter is a husband, father of two (including one born just two weeks ago), and author of THE book on the liberal mob, “Outrage, INC.: How the Liberal Mob Ruined Science, Journalism, and Hollywood,” which examines the ways, both obvious and subtle, the liberal mob works, how it was created, and how they use emotional manipulation to override rational thought and influence the American people. Help feed is family and order a copy today! And subscribe to his free daily podcast on iTunes to hear him cover the news of the day every day. Check it all out here.