Liberals Are Pushing The Country To The Edge

Derek Hunter
|
Posted: Jun 24, 2018 12:01 AM
Share   Tweet
The opinions expressed by columnists are their own and do not necessarily represent the views of Townhall.com. 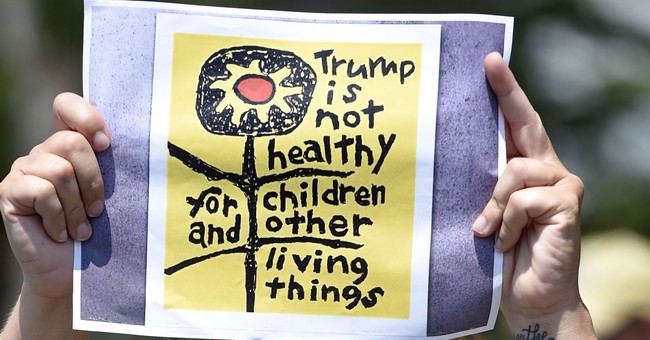 In a time of crazy, it’s been a Hell of a week. I literally wrote the book on the liberal outrage culture and this week disturbed even me. There are some things you simply can’t undo, some ledges you can’t pull back from. We’re teetering on one now. How can we, as a nation, get back to civility or even just get along again?

The ability to agree to disagree is dead, murdered by leftists who demand absolute adherence to their political will or they declare you an enemy of the people and seek to destroy you. As long suspected, those “coexist” stickers on their Priuses were for show, they should read “obey” because obedience, in absolute terms, is the only acceptable way to “coexist” with the liberal mob.

Make no mistake, this mob is not the majority, or even anywhere close to plurality, but history is littered with examples of small, committed and violent gangs of thugs obtaining power through a willingness to do anything to get it. That’s what Democrats are becoming – American Castros, Khmer Rouge, Gestapo, or whatever example you like. These are all different sides of the same “progressive” dice and liberals are gearing up to roll them.

When the leadership of the party does not condemn mob action against a Cabinet Secretary while she’s having a meal or is at home, disrupting her entire neighborhood, the next steps are only more dangerous. And when the media willingly lies to advance the mob to those next steps, how do you pump the brakes on this runaway train?

Time magazine used to be important, used to have standards. But when they used the picture of a little illegal alien girl who was not separated from her mother on their cover to represent all illegal alien children at the border because she was crying and perfectly fit their narrative they crossed a line. When they were informed of the fraudulent nature of the picture they chose to ignore it, choosing activism over accuracy. They chose emotion over truth.

That’s the thesis of my book – that liberals appeal to emotion to override thought or to prevent it in the first place. An individual can be reasoned with, but a mob, especially an angry or frightened mob, cannot. Rational thought is overridden. No single person would smash a police car if they were simply walking down the street, but someone does if a crowd of people are being whipped into a frenzy by protests or even celebrations. No one man would open fire on a baseball team of Congressmen while they practiced, but one did after months of speeches and stories about how those Republicans were working to pass legislation that would lead to the deaths of tens of thousands of Americans annually.

The week before progressive activist James Hodgkinson tried to murder as many Republican Congressmen as possible, I predicted that the dark place liberals were occupying was going to lead to blood. The week after I wondered if it the blood they got would be enough. Now the answer is clear – it will not.

When you hear that the President of the United States is well on his way to becoming the next Hitler, you almost have an obligation to act. When you’re whipped into a frenzy fed by dishonest reporters spinning half-truths into concentration camps, it’s only a matter of time before another person snaps at members of the party enabling the next despotic monster. It’s not only inevitable, it’s the objective. That’s the only logical conclusion you can draw.

These aren’t fringe elements anymore, these are journalists and pundits in good standing on CNN and MSNBC spreading these lies. They are being parroted and acted up on by an angry mob simply waiting for a spark, or worse, an opportunity.

All the while, party leadership is silent. What 2 years ago would have rightly been condemned as unacceptable in a civil society has become the electoral strategy of the Democratic Party.

It’s been building to this for some time, the economy is booming at a pace liberals declared impossible and the unemployment rate is so low they can’t even claim to offer to create jobs because there are more available than we can fill. Democrats have nothing to sell the American people but being the alternative to what they declare evil. For that declaration to carry any emotional weight the hateful flames of their fringe have to be stoked to engulf enough people to motivate them to vote in November. The question is, will November come before the spark they’re building toward that ignites something awful?

If combustion comes first, will they care?

There may be no coming back from this ledge, it seems we’re well past the point of no return. I hope I’m wrong. But having spent a year digging into how this liberal machine is designed to whip the unstable into a frenzy, the one thing I didn’t find was how they ever planned to turn it around.

Check out my book, Outrage, INC: How the Liberal Mob Ruined Science, Journalism, and Hollywood, to see how we got to this point. Sunlight is the best disinfectant and exposing the machine to the public might be the only way to stop it. If there is a way to stop it.