It Is Time For John McCain to Retire

Derek Hunter
|
Posted: May 13, 2018 12:01 AM
Share   Tweet
The opinions expressed by columnists are their own and do not necessarily represent the views of Townhall.com. 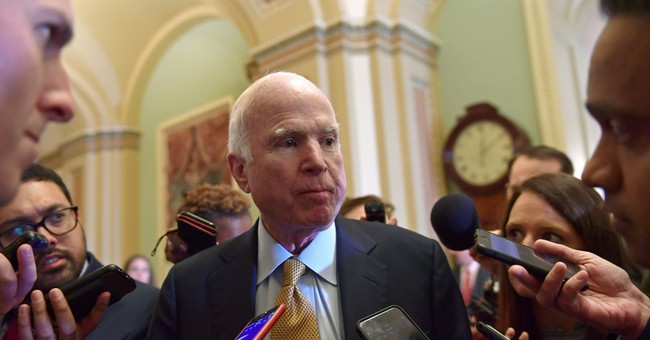 This is one of those columns that runs the risk of ticking off everyone. Whenever you combine politics and death, especially when using a political lightning rod to do it, people on both sides tend to get upset. But I don’t care, it has to be said – John McCain needs to retire from the Senate.

With that being said, this column is not really about Senator McCain, per se, it’s about the fact that far too many career politicians, as they approach their sunset years, stay in office longer than they are able to do the job. McCain just happens to be the current, and one of the most visible, examples.

This is where I insert the obligatory disclaimer about McCain being a hero and praise his military service and sacrifice. It is not just a formality, it is actually true. And anyone who writes anything about him that is even remotely negative has to preface what they with this disclaimer. But again, this is not about him.

McCain’s brain cancer is horrible, and likely terminal. Just how long he has to live is unknown, hopefully, for the sake of his family and friends, he responds to treatment and lives a long time. Being 81 years old, that seems unlikely. Still, you never know.

But that has nothing to do with why he should resign. Nor does any of the problems I and other conservatives have had with McCain over the years, including his deciding vote against Obamacare repeal.

No, he should resign because he physically cannot do the job anymore.

It is an open question as to when, if at all, McCain will return to the Senate. His staff is still handling constituent services, but he is missing votes, hearings, and all other obligations. He is not doing the job. He cannot do the job. And the people of Arizona deserve better.

Like I said, it is not just McCain. Former Mississippi Senator Thad Cochran retired on April 1st, but he was not well for years. Stories circulated on the Hill for years of Cochran getting lost walking to his office, staff writing out his questions for hearings, and guiding him around the Capitol.

Robert Byrd, Senator from West Virginia, was voting while essentially being pushed around the Capitol by staffers. Former Massachusetts Senator Ted Kennedy stopped showing up the months before his death, staying home with family, but still technically a Member of the Senate till his death.

There are current Senators and Congressmen who, if you listen closely at televised hearings, are going through what we all (hopefully) will – the end stages of the aging process. But they are not all there. It is an open secret in Washington that some people stay longer than they should because they simply do not3 know what else to do with themselves or they think the republic wo will not survive without them. It will.

John McCain is just the latest example and it happens to be playing out in public. Most of the other’s final years played out in private, and the phony politeness of politics caused it to remain unspoken and only whispered about by journalists.

Believe me, I am not comfortable pointing this out, how someone handles their sunset is up to them. But when they are an elected official they also have responsibilities to more than just the people they love – they have obligations to represent their constituents. If they find themselves in a position where they can no longer do that, they should step down for the good of the people who entrusted them with that position.

If the President falls ill, he can be relieved until he is able to resume his duties. When Senator Tim Johnson suffered a stroke, he missed nearly a year of work. While it is wonderful that he survived and was able to return, the full responsibilities of his job were not done for that time.

We elect people, not gods, and we elect them to do a job – represent us. If they cannot do it, they should gracefully exit the stage and allow someone else to. I would rather John McCain not run last time, I would rather have a solidly conservative Senator from Arizona, but this has nothing to do with any of that. This has do with the fact that there is a job that needs to get done and it is not being accomplished.

Senator McCain, and all Members of Congress, currently hold their office, but they are not their jobs. Those jobs existed before they held them, they will exist after they do not hold them. When our representatives find themselves no longer able to perform their duties, it is time for them to step down…even if they are a hero.

Author’s Note: Do not forget to pre-order my book, Outrage, INC: How the Liberal Mob Ruined Science, Journalism, and Hollywood, out June 19. It is a funny and frightening look at all the ways liberals are manipulating the American people and how to defeat it. Protect yourself, and your friends and family, from the propaganda machine infesting everything from the boardroom to the ballfields. Plus, you will  have my eternal gratitude