Derek Hunter
|
Posted: Mar 18, 2018 12:01 AM
Share   Tweet
The opinions expressed by columnists are their own and do not necessarily represent the views of Townhall.com. 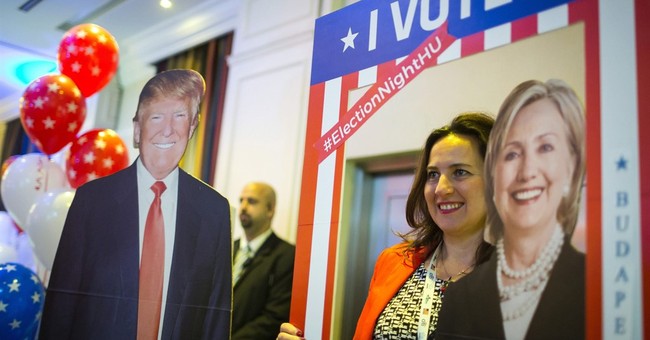 There is no doubt that I am lucky. I’m certainly not rich (though not for lack of trying), but I was born into a loving family, have a great wife and daughter, get to write for a living, and I was born an American. Over time I’ve grown to appreciate each of those things, as happens in life, more than I did when I was younger. But one of them has seen its value be diminished significantly – the being an American part.

Don’t get me wrong, I love the United States, it’s the most amazing of all human experiments and is responsible for more good in the modern world than anything else, by a longshot. But in recent years actually being an American is being devalued. Not by some external force or it being overtaken by being a citizen of some other country. No, it’s been cheapened by the Democratic Party’s lust for power.

As the Democratic Party has lurched further and further to the left, they’ve lost the support of what used to be a significant portion of their base – middle-class, blue-collar Americans. Appealing mostly to wealthy coastal elites and victims of generational poverty inflicted at the hands of government “generosity,” there simply aren’t enough people willing to vote the way these leftists want them to vote to gain what they ultimately want: a permanent grip on the levers of power.

Rather than take a long look in the mirror and rethink their priorities to regain lost ground, they’ve opted for a different path. That which they can’t get through the electoral process, they will try to obtain through the courts. The irony of people who routinely chant “this is what democracy looks like” at their sparsely attended protests, and with “democratic” being in their name, they will spare no expense to subvert the democratic process.

With President Donald Trump filling court vacancies, and George W. Bush before him, the windows for those opportunities, while still open, will be more closed than they used to be as more conservatives take seats on the bench. That leaves the Democratic Party with fewer options to advance their agenda.

In need of an alternative pathway, they turned to race and immigration. Race has been used as a wedge to divide Americans into tribes for a long time by Democrats and helped them corner the market on the black vote without ever having to deliver on promises. Fear is a hell of a motivator.

But the black vote, outside of larger cities, isn’t enough to win enough elections. The Hispanic vote was just sitting there, ripe and ready to be picked.

Using the same tactics of fear and racial identity, the left started pitching Hispanics on the idea that there was a faceless force working against them, that the concepts of individual liberty and the free market were a part of that force, and the Democratic Party was the only thing holding off that force.

It’s a diabolical plan because it absolves the target of it of any and all responsibility for the troubles in their life. You didn’t get a job not because someone else was more qualified, you didn’t get it because of racism. Same reason you were fired. Any setback could easily be attributed to this “systemic” force. And it’s much less damaging to the psyche to believe setbacks were beyond your control than the result of your actions and choices.

The Hispanic vote began to solidify behind the Democrats, but not enough to make the needed difference. Republican candidates still received too many Hispanic votes for Democrats to fully, two-fisted grab ahold of the levers of power.

With millions of illegal aliens in the country, this large pool of potential voters for Democrats was only prevented from pushing them over the finish line by a lack of citizenship. So that, and for that reason only, is what they’ve set out to do.

Democrats have systemically removed or ignored punishments for entering the country illegally, for working illegally, for stealing identities to work. They’ve turned the perpetrators into victims. To hear Democrats talk about illegal immigrants you’d think they were the greatest human being ever birthed – hard working, family loving people who want nothing more than to make a living.

While some obviously are, many are not. Our prisons are full of illegal alien felons. Schools are overrun with non-English speaking students who cost significantly more to educate, therefore costing taxpayers money and American students limited resources.

We are told that somehow, magically, these low-skilled illegals who can’t speak the language are a major net-positive to the economy; that they pay billions in taxes while living in poverty with no ability to legally work in the country. And we’re told to question this mystery is racist.

While our federal elected officials have thus far resisted demands for “action,” state and local officials, as well as some courts, have found new and creative ways to subvert the rule of law to protect illegal aliens from deportation. Moreover, Democratic politicians across the country have been incentivizing them to stay and more to come. State issued drivers licenses, in state tuition, welfare benefits, encouraging law enforcement and local prosecutors to drop or lower charges to protect against deportation are but a few of the benefits heaped upon people whose presence in the country is a violation of the law. Now, California has appointed an illegal alien to a statewide government job. Is that a “job Americans won’t do” now, too?

Honestly, why would anyone follow our immigration laws at this point? The legal process can take years, so why not just show up or overstay a visa? That’s where the red carpet is rolled out.

Once citizenship is granted, and that’s the ultimate goal, the groundwork of bribes and fear will be as hardened as a sidewalk. Voter registration forms will be stapled to their paperwork, and it’s game over.

So the question is this: what’s the value of citizenship anymore? If it’s given out like candy on Halloween, what makes being an American special? The answer, sadly, is that value is diminished. And if Democrats get their way, it will be devalued even more. Because it was never simply being an American that was special, it’s America itself that made it so. And it’s America itself that that is under assault.

Share this on Facebook
Tweet
Of Course, Our Liberal Media Decided to Side with the Hamas Terrorists
Matt Vespa
An Anti-Trump Republican Plotted to Get Rid of Kevin McCarthy. Here's Why It Didn't Last Long.
Matt Vespa
DeVos: Teachers' Unions 'Play Politics with Kids' Lives'
Spencer Brown