Republicans Are Blowing It

Derek Hunter
|
Posted: Oct 19, 2017 12:01 AM
Share   Tweet
The opinions expressed by columnists are their own and do not necessarily represent the views of Townhall.com. 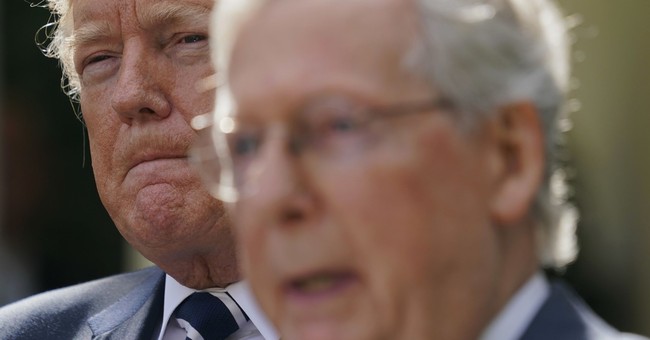 After eight years in the wilderness, Republicans have a president who will sign nearly anything they put in front of him. You’d think they’d revel in the opportunity to pass legislation they’d been dreaming of codifying in law, but you’d be wrong.

Rather than attempt to implement the ideas on which they’d campaigned and won on, they’re staring blankly like a poker player who over-bet with a pair of twos and had his bluff called.

It wasn’t that long ago the conservative think tanks were idea factories. Not small ideas, not tweaks, but big ideas like the successful welfare reforms of the late ‘90s. Books that represented years of work were published to offer up roadmaps for a Republican president to implement conservative ideas.

Now most of those think tanks are just tinkering on the edges, engaging in “reporting,” or just generally changing their focus from influencing policy to influencing donors.

It has worked – they’ve raised a ton of money. But to what end? Where are the ideas in the fight to advance liberty?

It’s not all the fault of think tanks. These members of Congress ran on issues. They promised to push for certain things. Yet they’re not fighting for them.

House GOP leaders like to point out how many bills they’ve passed that have died in the Senate, and it’s true. The House has passed a lot legislation that is in limbo because of the filibuster in the Senate. But none of them are transformative, none are major overhauls or reforms. None dramatically shrink the size and scope of the federal government. They’d be small victories, at best.

The Republican takeover of Congress in 1994 brought with it a wave of ideas ready to be voted on that mattered, and most passed. Current congressional Republicans have nothing of the sort – they’re the worst pitcher in the bullpen who never expected the game to go 18 innings and didn’t pack his cleats.

And that’s the problem – Republicans never expected to be in a position to implement anything, to have their votes count. It’s easy to vote for Obamacare repeal when you’re certain it’ll never become law. It’s a different world altogether when there’s an occupant of 1600 Pennsylvania Ave. who’d sign that bill.

Republicans all ran on big ideas, on conservative principles, because they were convinced they’d never be anything but abstract concepts with which to attack President Hillary Clinton. They didn’t have to believe in them because they were never going anywhere but the veto pen. They just had to talk a good game to get elected.

Unfortunately for them, voters took them so seriously they empowered them to implement their ideas – which exposed that they really have none.

This should be a golden age for Republicans – President Trump not only will sign what they put in front of him, he’ll praise it and sell it as the best thing ever. But they can’t because too many of them believe in the ideas they campaigned on only as campaign issues that would get them elected; no more and no less.

So when Steve Bannon says he’s declared war on weak Republican senators, I’m sympathetic to a certain degree. Replacing a few squishy GOPers with solid conservatives would be great, but it won’t change the overall problems preventing action on important policy areas.

There’s no guarantee a fight right now would do anything but give the Senate to Democrats. With the prospect of one or two Supreme Court nominations over the next three years, the possibility of Chuck Schumer having a say in who fills them is too high a price to pay for moral victories.

There are a lot of Democrats up in 2018 who represent states Trump won, and many can be flipped if that is the uniform focus of everyone looking to make a difference. Republicans could even reach the magical 60 seats they need to break any filibuster, if they play it smart and don’t waste resources firing down their own trench.

This, done successfully, would have a major impact not only on the configuration of the Senate for 2019-2020, it would put every senator up in 2020 on notice that the people who’d elected Trump (and them, originally) meant it – they want done what they said they’d do.

There are 23 Democrats among the 33 seats up for election in 2018, and there are 22 Republicans up in 2020. Each member of the class of 2020 would see what happened in 2018 – if the energy of 2016 were properly harnessed into next year’s election and Republicans added seats – and be scared into governing as the conservatives they ran as.

Nothing causes politicians to keep their word like the prospect of voters holding them accountable. And voters know if Hillary Clinton were president she would have had to have vetoed at least two straight-up Obamacare repeal bills by now.

Imagine the pressure on Maine’s Susan Collins to vote for repeal then, when the people she promised she would repeal Obamacare are waiting there to have their say. Same for Alaska’s Lisa Murkowski, who’s up two years later.

More importantly, their votes wouldn’t be needed, so there’d be no need for “giveaways” to obtain them. They could be left out to dry, forced to fend for themselves in their re-election bids. That’d go a long way toward inspiring them to keep their word.

Republicans have all the advantages any party could ever want right now and they have done nothing with it. Some have refused to act out of a dislike of President Trump. Others never meant the things they said during their campaigns and never expected to have their bluff called.

But voters did call their bluffs. Applying pressure by making their votes irrelevant is a much more effective strategy than risking losing the Senate when the real possibility of swinging the Supreme Court toward an originalist majority exists.

For all his faults, Mitch McConnell kept open the seat Justice Neil Gorsuch ultimately filled for a year. There is no doubt whatsoever Chuck Schumer would do it for two. Republicans are blowing a great opportunity for legislative victories right now; only by playing it smart can that tide be changed, both in the short-term and in the long-term with a conservative Supreme Court. Otherwise President Bernie Sanders and Vice President Elizabeth Warren will be filling the long-vacant seats on the high court in 2021.

If that, or anything close to that, happens…it’s over.