For Democrats, How Many American Victims Are Enough?

Derek Hunter
|
Posted: Mar 05, 2017 12:01 AM
Share   Tweet
The opinions expressed by columnists are their own and do not necessarily represent the views of Townhall.com. 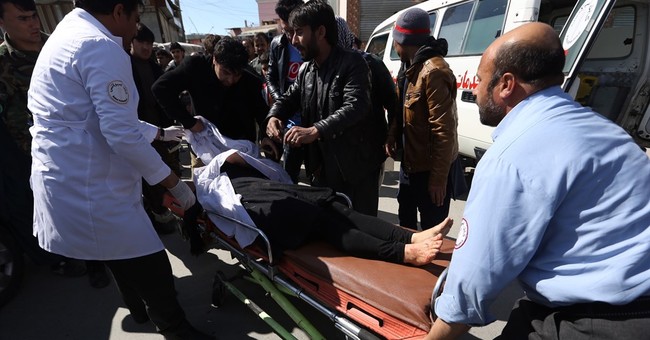 Now that President Trump has followed through on his campaign promise and started the deportation process for criminal illegal aliens, Democrats and the media are united in outrage. One talking point dominates all others: Immigrants have a much lower crime rate than Americans do, so it’s unfair to target them. This begs the question: To these liberals, how many American victims of illegal alien crime would it take to for it to matter to you?

There are regular reports of violent crimes committed by illegal aliens – horrific gang-related murders have occurred recently in New York, Washington, D.C., and Houston – but the true crime rate among illegal aliens is not known. Most states do not keep those records for reasons we can only guess, plus there is no way of knowing the real number of illegals in the country. That fact hasn’t stopped liberal commentators and politicians from stating unequivocally that we Americans are the real crime problem in this country.

Although it may be true, and from a sheer numbers standpoint it undoubtedly is, it’s also irrelevant. Victims of crimes committed by illegal aliens would not have been victims if those people were not in this country. Every person murdered by an illegal alien would still be alive.

This is a simple fact those who spout this made-up “statistic” hope people don’t realize, because their entire argument would fall apart if they did.

Kate Steinle, the young woman murdered in San Francisco by an illegal alien with multiple convictions and deportations, would not have been murdered that July day in 2015 if the man who did it had not been in the country illegally in the first place.

Democrats don’t care. In addition to doing all they could to ignore Steinle’s murder, they even voted against Kate’s Law, which would impose a minimum sentence of five years for already-deported illegal aliens who re-enter the country. Like I said, Democrats don’t care.

Democrats would rather pander for the potential votes of illegal aliens should they be granted citizenship than defend Americans.

At President Trump’s address to a joint session of Congress, Democrats went so far as to invite illegal aliens and their children to be their guests in the House gallery.

In the build up to the speech, one woman in particular garnered a lot of Democratic and media sympathy.

The children of recently deported illegal alien Guadalupe Garcia de Rayos were invited guests to the president’s speech, and their “plight” was widely reported in incredibly sympathetic, if not accurate, terms.

Guadalupe’s sad tale of woe was easy to find across the media, but the reason she was deported wasn’t as readily available.

The New York Times, of all places, is where you can find it, though it’s only casually mentioned in their story.

After mentioning Guadalupe had been meeting with Immigration and Customs Enforcement officials for nearly a decade, the Times noted these annual meetings were “a requirement since she was caught using a fake Social Security number during a raid in 2008 at a water park where she worked.”

That’s a politically correct way of saying she committed fraud or stole someone’s identity – the Times doesn’t say which. But those are the only ways an illegal alien could get a legitimate job.

Although certainly not murder or drug dealing, neither option is a victimless crime – either an American was denied a job by fraud and/or another had their identity stolen. And that’s the real truth Democrats don’t want you to think of – illegal aliens have countless victims who may not know for years, if ever, that they were victims.

Still, Democrats do not care.

This is to say nothing of the cost to society. The cost of educating illegal alien children is significantly higher than Americans because of the language barrier. This siphons off valuable taxpayer resources from American children, usually from poor urban areas, making those children victims of illegal immigration.

Again, Democrats do not care. They’d rather focus on an illegal alien being arrested after giving a defiant press conference than reality.

Illegal immigration is not a victimless crime simply because not all illegal aliens are members of MS-13 or Democrats want to pretend it is. Real people suffer real consequences when someone enters the country illegally or overstays a visa.

The question is: What is the magic number of Americans who must be victims of these crimes before Democrats will care more about those victims than about the potential voters now in our country illegally? If recent actions are any indication, no number is high enough.