Derek Hunter
|
Posted: Mar 24, 2016 12:01 AM
Share   Tweet
The opinions expressed by columnists are their own and do not necessarily represent the views of Townhall.com. 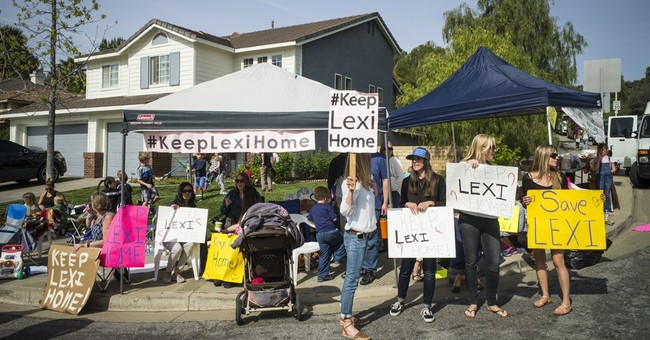 Lexi has lived the vast majority of her short life in foster care, the last 4 ½ years with the Page family in California. Her parents are not dead; they’re degenerates – addicts who have spent time in prison. They don’t have custody, nor do they seek it. But their tribe … that’s another story.

Lexi, it turns out, is 1½ percent Native American; Choctaw, to be precise. As such, the Choctaw tribe essentially has claimed ownership of her.

When I say “ownership” I don’t mean to imply something akin to slavery, I mean to flat-out say they are treating this child like she is an old car or pair of pants over which they can assert their will. That concept would turn the stomach of normal human beings, but thanks to government and the perverse progressive art of identity politics, it’s all perfectly legal.

Lexi has been taken from the Page family, who sought to adopt her, and placed with step-second cousins because the government, in an attempt to make up for the horrible treatment Indians faced at the hands of people long since dead, passed the Indian Child Welfare Act. The law, passed in the 1970s, requires Native American kids to be placed with Native American parents.

Of course, even a child could recognize the fact that step-second cousins are not parents, nor are they blood relatives. Furthermore, they aren’t even Native Americans. They’re just people whose names you struggle to remember at family reunions and funerals.

But what they are in the case of Lexi is the Choctaw-chosen guardians for a child who is barely, if at all, related. Lexi is no more a Choctaw than Elizabeth Warren, the senator from Massachusetts who lied about her ethnicity to get a high-paying job. But because of the law, the Choctaw can do with her as they please.

The Choctaw released a statement reading, “The Choctaw Nation desires the best for this Choctaw child. The tribe's values of faith, family and culture are what makes our tribal identity so important to us. Therefore we will continue to work to maintain these values and work toward the long-term best interest of this child.”

Did you spot what’s missing from that statement? Her name, for one. Lexi isn’t a human being, she’s “this Choctaw child” – a commodity they own and can dispose of as they will.

Also missing is any shred of reality. Where were the “tribe's values of faith, family and culture” when Lexi was a baby living with degenerate addicts? Where was their concern then?

To call Lexi “this Choctaw child” is to deny her individuality, her humanity; and the tribe’s ownership claim is akin to the racist “one drop rule.”

Lexi has now been ripped from the only family she’s ever known because the progressive left values racial identity over everything else. You aren’t an individual, you’re your skin color, your race, your income, your gender, your sexual orientation, your…whatever. Anything but an individual.

Lexi is simply the latest collateral damage of another left-wing racist idea – children need to be raised by someone of their own race or they are somehow denied their “cultural identity.”

Through this thinking, groups of people can be manipulated, turned against either other. That’s the left’s key to electoral power.

Lexi’s fate doesn’t bother leftists at all. If progressives haven’t been deterred or even bothered by the more than 100 million murdered and the hundreds of millions more whose lives have been destroyed by their policies, what’s one more little girl?

The evil is the identity politics in the first place that would accept this treatment of a human being.

The worst part is it works.

Occupy Wall Street, Black Lives Matter, the Indian Child Welfare Act, all branches of the same rotten tree of progressivism. Lexi is just the latest victim; there will be more. There are always more.

No, I don’t hate government. I hate what unchecked, progressive government does.