Not A Good Week To Be A Democrat 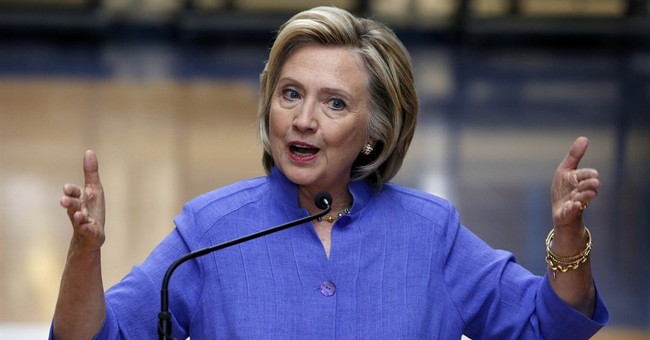 Whatever side of the Trump Show you’re on, it’s a good time to be a Republican. Of course, with the first primary/caucus votes months away, that may not seem like much. But elections are, with rare exception, long slogs, not a flash mob. The fight for votes takes time, as does the fight to interest voters. On that front, the GOP is light years ahead of the Democrats.

If the GOP has shown anything it’s an uncanny ability to duff a tap-in putt, so nothing is close to certain.

But when you look across the aisle it becomes clear, at least for now, that the GOP field is firmly in the driver’s seat.

Democrats have suffered from complacency. Their primary was supposed to be a Rambo movie with Hillary Clinton easily swatting away everything that came her way. But, as a candidate, Hillary Clinton is not so much Rambo as Steven Wright on Valium.

The lack of an inspirational message or personality is coupled in Clinton with the sincerity of a used car salesman and an alcoholic family member swearing “this year will be different” if you’d just invite them over for Thanksgiving. In other words, the Democrats have a problem.

A new poll in New Hampshire has the Democrats’ chosen nominee seven points behind socialist Sen. Bernie Sanders of Vermont. Sanders was supposed to be this cycle’s Dennis Kucinich – the fringe candidate the party plays nice with in public to placate the radicals and pretend the nomination isn’t rigged.

But the fringe candidate is pulling in larger crowds than the average attendance of an NBA game, and the anointed one is staging filtered photo-ops with prescreened robots programmed to ask their assigned questions while smiling and nodding at her answers. To say Hillary Clinton suffers from an enthusiasm gap is to call the Grand Canyon a pothole.

Hillary’s lack of interest as a candidate is more than made up for by the interest the FBI has in her handling of classified material on her secret private email server while she was secretary of state.

Unqualified for the job, she was offered it as a hedge against a 2012 primary challenge and accepted it as resume steroids. Both plans worked on the surface, but Barack Obama proved so inept as president that running his foreign policy is a liability.

On Clinton’s end, she can now properly pronounce the names of world leaders, but she’s still the same horrible public speaker and campaigner who got humiliated by an unknown freshman senator last time around.

Sanders and former Maryland Gov. Martin O’Malley, barely an afterthought to primary voters so far, easily could destroy Clinton on her record and corruption allegations, but they helped create the PC beast that would be unleashed on them for doing so. Now, they have filled their own parachutes with bricks and are going down with the plane … left only to complain about a lack of debates.

Sanders is actually a threat to Clinton – he voices her inner monologue. But the fact he can be silenced by a couple of screaming brats shows he can be easily disposed of if he’s anything more than a novelty when it comes time to cast votes. The FBI, on the other hand, is unburdened by such trivialities.

The Clintons are used to getting away with it, no matter what “it” is. Bill and Hillary’s skirting of laws is legendary, so there’s no need to recount them. But they were always done with the protection afforded those with access to the levers of power. The Clintons are out of power, and although President Obama has a minor legacy interest in protecting them, he’s never really been a fan.

The only thing saving the Clintons from a date with justice could end up being the current occupant of the White House wanting the next one to “look to the future” and not backwards into such incidents as IRS targeting, Fast and Furious, etc. But even the president can’t fully protect her, even if he were so inclined, the way the Clintons are used to protecting themselves.

The last time they faced serious corruption charges the Internet was new and new media was a few teenagers blogging about their weekend drinking binges. The media landscape has changed, and they haven’t.

They’re still good, perhaps the best there has even been, so there’s no guarantee they won’t be able to slip through again. But for now, for right now, it’s much better to be a Republican than a Democrat. Enjoy it while it lasts.