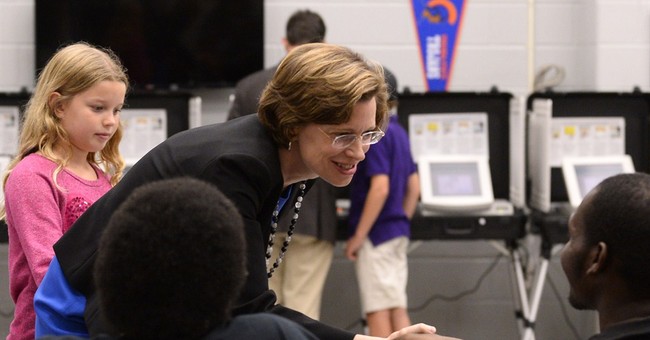 When it comes to life’s guarantees, there’s death, taxes, death taxes, the tides, the Chicago Cubs not winning a World Series, and the race card being played by Democrats as an election approaches.

With less than two weeks to go before this year’s mid-term elections, that last guarantee is in full effect.

Polls show Democrats aren’t very excited at the prospect of voting next month. They’re disappointed by the president’s failures and the fumbles by their candidates. But make no mistake – they will vote, and they will vote for the Democrats.

Polls on enthusiasm are interesting but irrelevant in terms of results. The vote of people who march into a polling place with a smile on their face and all the hope in the world in their hearts counts the same as the vote of someone reluctantly sulking in the booth next to them.

It’s down to headcount now – who can get people to show up and vote.

To that end, Democrats are starting to panic. Without President Obama on the ballot, many reliable Democratic voters simply don’t care about the election. The party must do whatever it can to get those people to the polls.

Democrats worry most about black turnout, so we’re seeing efforts to “inspire” black voters to go to the polls. Their tactic is humans’ greatest motivating force—fear.

In Georgia, where Democrat Michelle Nunn is battling with Republican David Perdue, Democrats are circulating fliers telling voters to vote if they “want to prevent another Ferguson.” This reference to the shooting of an unarmed black man by a white police officer was roundly condemned by everyone except Democrats. Nunn refused to disavow it. She hopes this race-based appeal will motivate more black voters to the polls than it will turn off.

In North Carolina, a shadowy group supporting Democratic Sen. Kay Hagan distributed fliers on cars at a black church that warned, “If Kay Hagan doesn’t win! Obama’s impeachment will begin! Vote in 2014.” Those words were superimposed over an actual picture of a lynched black man and a crowd of white onlookers. The message is clear – vote for the Democrat to stop the black president from being lynched. Ironically, the white men in the picture most likely were Democrats, given the party’s history of segregation and racism.

Two of these events took place this week in Maryland, one of our bluest states.

The race for governor of Maryland was a formality, or at least that’s what conventional wisdom told us. Democratic Lt. Gov. Anthony Brown was all but assured victory, running in a state with a 2 to 1 voter registration advantage over Republicans. Brown had the added advantage of history, running to be the first black governor in a state with a large black population.

But Brown is an uninspiring candidate running an uninspiring campaign in a state weary of the failures of the previous eight years of Democratic rule. Moreover, he is best known for being in charge of setting up Maryland’s Obamacare exchange, a process that failed so miserably the state abandoned the effort and purchased a system from Connecticut. And he’s running against a successful small businessman in Larry Hogan, who has a vision for the state. In an election experts predicted would be a double-digit Democratic victory, it’s a 1-point race.

That closeness explains why the Democratic Party turned to race this week.

First Democrats sent out a mailer to black voters that invoked segregated waiting rooms and anti-civil right marches and equated voting for Brown with Martin Luther King’s March on Washington. (Seriously, take a minute, click here and see for yourself.)

The next day, black voters got another flier drawing a direct line from Martin Luther King to Barack Obama to Anthony Brown. Worse, it used the racially charged events in Ferguson, Mo., as an example of ways Republicans are “still trying to hold us back.” (Again, take a minute, click here and see it for yourself. I ask you to share both on Facebook and Twitter because people need to see the depths to which Democrats will go to scare people to win.)

These examples of depravity and desperation are not the actions of a confident party. Democrats are worried, and rightly so. But if conservatives, libertarians and Republicans sit out Nov. 4 to either “send a message” or because of apathy toward the party or a candidate running in their state, these tactics will be rewarded with governor’s mansions and maintained control of the Senate. And, ultimately, more control over your wallet, your liberty and your life.

If that happens, two years from now there will be nothing to stop more thinking like this from moving into the White House. The choice is yours.