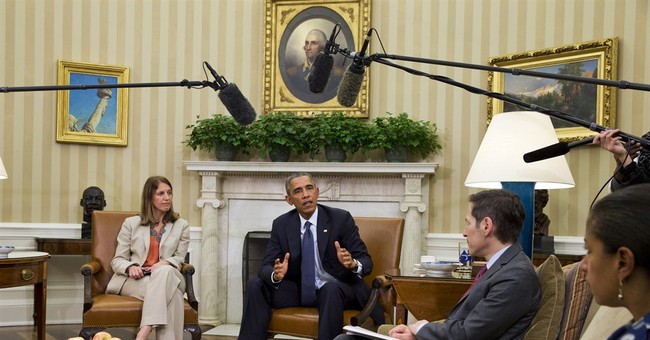 The Ebola outbreak has been a disaster in politics, but a boom for capitalism. Weird how that works, but it is how many things work.

President Obama’s handling of the Ebola outbreak has been an unmitigated disaster. At first, he dismissed it. Then, he panicked and started canceling campaign and fundraising events to engage in the “optics” of being in charge.

It was too late. With his indifference toward beheadings and terrorists attacks that killed ambassadors in the past, the president altering his heretofore unalterable schedule signaled a panic message to the American people. If there’s nothing to worry about, why would he change his schedule now when he couldn’t be bothered to during so many previous crises?

Barack Obama always has been politically tone-deaf when it comes to leadership, but nearly perfect pitch for campaigning. The Ebola crisis requires him to move from the latter into the former. It’s an unnatural fit, and it’s showing.

Obama isn’t a leader, he’s a cheerleader. If you ever saw Marlon Brando interviewed, that’s kind of how the president is.

Brando was a brilliant actor, believable in every film he made. But although he played brilliant and intelligent characters on the screen, he was crazy in real life. He rambled, said off-the-wall things and could barely string together a coherent sentence. The president is the same way.

Barack Obama on teleprompter has few peers. Off it, he’s the guy in class who writes exceedingly long answers to simple essay questions in hopes of throwing enough on the page to confuse the teacher into thinking he actually does know the answer.

After weeks of refusing to take Ebola seriously and trying to project calm, the president’s sudden and abrupt reversal didn’t quell fears, it’s sparked them.

The appointment of Ron Klain as Ebola czar shows the president is more interested in appearing to take Ebola seriously than actually doing so. Klain is a Democratic Party operative, lawyer and former chief of staff to both Al Gore and Joe Biden who has zero medical background. On top of that, this vital new czar won’t be reporting directly to the president at all.

The media, most of whom are fans and supporters of the president and his policies, found itself between a rock and a bleeding person with uncontrollable vomiting. Big Media has tried to protect the president, and it wants to do so again. But the old playbook doesn’t apply in this case.

The American people do find Fast and Furious, the IRS targeting Americans over their beliefs, Benghazi, and all the other Obama scandals unsettling, but those dust-ups are needle-movers only for people who didn’t trust him in the first place. With Ebola, as remote of a possibility as it is, people have a natural instinct to think it could happen to them. A history of incompetence and indifference turned on a dime does not confidence instill.

The media can’t ignore the story—and can’t resist it either. The only thing the media loves more than a crime involving an attractive, young white woman is a story out of a Hollywood movie that scares people. Unfortunately for them, this story, no matter how it’s told, makes government look incompetent.

Some in the media have tried to insulate the administration by attacking those critical of its inaction. But these attempts have failed miserably. The most spectacular failure was an attempted hit-job on Sen. Rand Paul, R-Ky., himself a doctor. It was a feeble and embarrassing failure.

So the media’s natural inclination to hype and sensationalize is butting up against the desire to protect Democrats, particularly the president. As hardcore Congressional Democrats continue to hold the line on simple measures such as implementing a travel ban to Ebola-affected countries, those in tight races are starting to break with the White House. The media is finding itself stuck defending a sinking ship in an increasingly pathetic way (as in, it would protect Americans, but it could hurt Africans), or satiating viewers who can’t get enough of the story.

This tug-of-war couldn’t have come at a worse time for Democrats. Faith in government was waning from the failures of the economy, Obamacare, the advance of ISIS, etc., etc., before this latest round of incompetence. But this one has people thinking about their mortality. Government incompetence could be a major contributor to the spread of something that could kill them. No reassurances can undo what demonstrated failure has done. At least not in such a short period of time.

Republican’s chances of a major electoral victory are increasing by the day, but there are still many days left before Nov. 4. Plenty of time remaining for them to blow it.

This election, thanks in large part to the Obama administration’s failures on the Ebola front, runs the risk of being a victory for whichever party or candidate fails the least, or fails last. It’s a hell of a way to run a country, but if it means President Obama won’t have a rubber stamp in the U.S. Senate to appoint more federal judges, especially to the Supreme Court, I’ll take it.

Wait, I did mention capitalism in the opening, didn’t I?

As with any event, triumph or tragedy, entrepreneurial types will find a way to make a buck off it. Ebola is no different. Everything from phony cures and hazmat suits, to stuffed viruses and comedy T-shirts is available for sale online. Human beings, like viruses, will always find a way to survive.