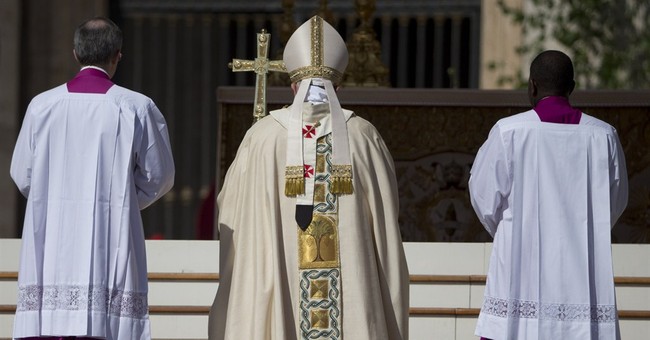 You’ve seen this a lot in the last decade and a half: progressives asserting a moral equivalence between radial Islam and Christianity. The argument usually goes something like, “Yeah, sure, terrorists are bad, but they’re hardly the only people to kill in the name of their religion!” Then there’s the obligatory reference to the crusades.

OK, sure, Christianity, like most religions, has had some less-than-flattering moments. But it’s history. If you can point me to the mass graves, severed heads or buildings for Christianity in our lifetime… no need to finish that sentence because there aren’t any.

Christianity is an easy target for progressives; it has a violent past and a central boogeyman – the Vatican. Plus, they hate Christianity because it preaches self-reliance and a Supreme Being, not a supreme leader. Christianity has one Savior born 2,000 years ago, progressivism has many on the ballot every election cycle. They’re quite similar, really, when it comes down to the structure of beliefs.

Both are based on faith – one in a creator, the other in legislation. But while you can believe there is no God, you can’t prove it. It’s all speculation.

On the other hand, it can be proven that progressive policies are failures, that they do actual harm. The 20th century is littered with more than 100 million bodies of victims of progressive’s attempts to create various incarnations of heaven on earth. No such equivalent exists for Christians.

Christianity and the Judeo-Christian belief system, upon which the vast majority of the civilized world is based, took some time to get to the point where it sits today. And there were growing pains, the crusades among them. But that was 1,000 years ago.

So why bring up something a millennium ago to deflect barbaric acts now? Are they implying each religion has to go through some sort of dark period before it enters the light? Of course not. They don’t believe Christianity has entered any light. They still see Christians as the root of most, if not all, evil in the world.

That’s how, after reports that a recent convert to Islam beheaded a former co-worker in Oklahoma, you end up with Media Matters For America employees writing things like, “if (sic) you want to believe islam (sic) has a lock on violence, dont (sic) google (sic) the crusades.”

See, a series of invasions to reclaim land lost is the same as terrorism because people died.

Forget the fact that one happened 1,000 years ago and the other is happening now. To progressives, sword fights over control of the Holy Land and suicide bombing a farmers’ market full of school kids are the same thing.

Actually, they’re not. Progressives have a bigger problem with what happened 1,000 years ago than they do with what’s happening now. A sword fight 1,000 years ago between two people whose name history didn’t record is worse, to them, than people currently forcing women into sexual slavery, mutilating their genitals, mass executions and cutting the heads off of people who don’t believe what they believe. They figure the descendants of the people with the swords probably don’t vote the way progressives want them to vote. And that is the only sin in the progressives’ religion of government.

Now, if Christians are forever to be judged by the sins of those who shared similar beliefs millennia ago, shouldn’t the same standard apply to them and people who share their beliefs just a century ago? Should their rules apply only to others and not them? I think not.

Names such as Stalin, Hitler, Mao, Kim, Castro, and on an on, all share similar Utopic views on the role of government in creating “fairness,” “justice” and “equality.” But one need not go to other countries to find atrocities both advocated for and committed by progressives.

American progressives of the 20th century conceived of and oversaw brutal displays of inhumanity to their fellow man in the name of purity and science. They lied to black men with syphilis, telling them they were getting free medical treatment, because they wanted to study the natural progression of the disease as it destroyed their brains. They interred Americans for Asian heritage in prison camps simply because they were Asian.

Progressives were the conceptual forefathers of Hitler’s racial purity madness, advocating for ridding the gene pool of what they deemed inferior races, disabled, criminals and those thought not to have high enough IQs to be worthy of reproducing. Whereas Nazis simply wanted to wipe them out by killing them, American progressives wanted to breed them out through sterilization. Well, for the most part; some did want to kill them too.

Should progressives be judged by their predecessors’ barbaric acts? Perhaps they should, since they haven’t really repudiated their goals, only their methods.

Just as no Christians are invading the Middle East to reclaim lost land just because their ancestors did, not all Kennedys are Nazi appeasers or misogynistic killers of women simply because some were in the past.

Not all Muslims are terrorists; in fact, very few of them are. But when it comes to violence committed in the name of “God,” in the name of a religion, those few currently have the market cornered. To pretend otherwise would be to pretend some people are simply better than others because of their skin color, that some people should be eliminated because they are “unworthy of living,” to think World War II could have been negotiated out of happening, to believe Mary Jo Kopechne died on impact… In other words – progressive.