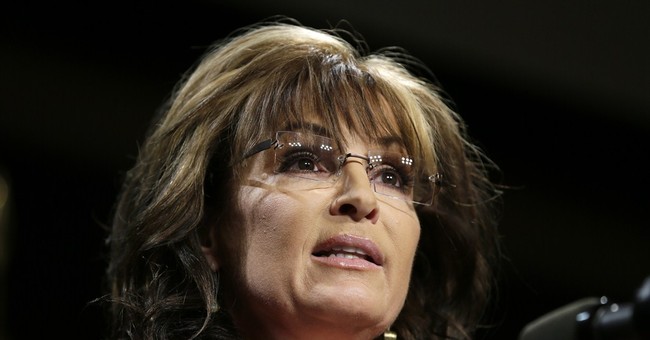 Democrats are getting desperate. November is coming, and they’re seen as the party of a floundering economy, feckless foreign policy and a president more interested in fundraising, golfing and vacations than doing his job. Not an enviable position to be in with an election looming. Enter impeachment.

Democrats are falling over themselves decrying the non-existent threat of impeaching President Obama. Members of the Congressional Black Caucus took to the House floor for a solid hour this week to slam the idea; Sunday talking head shows and White House staffers called the idea s outrageous.

Lost in all the media/Democratic hype over impeachment is the fact that no one of any seriousness is talking about it. But progressives have never been one to let reality stand in the way of a good fundraising pitch.

This would all be laughable and easy to ignore were it not for one large factor – Sarah Palin.

I know I’m not going to win any friends here by criticizing Sarah Palin, but I’m not paid to win friends. I’m paid to give my honest opinion, and it’s my honest opinion that Sarah Palin is, for whatever reason, harming Republicans’ chances come November.

Aside from a few backbenchers known only to the people in their districts, no Republican has mentioned impeachment. The American people do not approve of the job President Obama is doing, but they are not clamoring for his removal. They still like him personally.

Besides, serious talk of impeachment in Congress would do nothing but rally Democratic base voters to vote in an election they aren’t particularly interested in and raise tens of millions for progressive candidates. In short, even if there were an interest in impeaching Barack Obama, doing so would be political suicide.

A few weeks ago, she wrote a column entitled, “It’s Time To Impeach President Obama,” in which she effectively lays out the failures of the Obama administration and how horrible it has been for the country but does not provide any grounds for impeachment.

If this were a parliamentary form of government, her column would be an energizing call for a vote of “no confidence.” But the U.S. is a representative republic, so it’s irrelevant.

Then, Palin went on Hannity to claim “a great awakening is due in this country” and “impeachment is a message that has to be sent to our president that we’re not going to put up with this lawlessness.”

Impeachment is NOT A MESSAGE CONGRESS SENDS. It’s an extremely serious constitutional action reserved for when “treason, bribery, and other high crimes and misdemeanors” have been committed. Palin either doesn’t know this or hopes her audience doesn’t.

She ticked off a number of reasons to impeach the president, including “lying to the American people, and it means fraud. He has allowed fraud, his subordinates and he himself. To fraud the American people on these programs, these policies that he has promised will work or will not impact debt or deficit. These have been lies by our president. Yes, those are impeachable offenses.”

Look, I think Barack Obama has been a disaster, but being an awful president does not an impeachable offense make. And if lying about policies and their costs were impeachable, every elected official would be impeached, constantly.

Not only does Palin not seem to understand what impeachment is for, she is delusional about Americans’ appetite for it.

On the Michael Medved radio show this week she not only renewed her call for impeachment, she said there were Democrats who would vote for it. In a rambling, nonsensical answer to who these Democrats are, she said, “I believe there are elected independent Democrats who will do the right thing.” When pressed further, she said, “As more Americans open their eyes to this lawless presidency and the precedent being set, hence the reason we need to rein it in, the more the will of the people will be exercised and will be made manifest by our pressure put on these Democrats.”

The exchange is remarkable for its naïveté, and I encourage you – especially those furious with me right now – to give the entire interview a listen and see if you draw a different conclusion.

The problem is when Sarah Palin talks, she gets attention. She doesn’t have the biggest audience, but her followers are loyal and fierce. They’re also necessary for a Republican victory in November. If she misleads them into thinking the only thing holding back President Obama’s removal from office is unwilling Republicans in Congress, many of her followers could stay home on Election Day.

Democrats have taken to capitalizing on this impeachment talk as well, raising more than $2 million last week with breathless emails that told supporters they had to donate now to protect the Obama and his legacy. It’s one thing to stay in the news and boost the bottom of line of SarahPAC; it’s another to do so in a way that brings in $2 million in a week for Democrats.

The Senate is Republicans’ to lose, as it was in 2012. And just like 2012, some Republicans risk allowing their egos and wallets to overrule their desire to make that happen.

Would I love to see Barack Obama removed from office? Absolutely. And there are a lot of investigations that could lead to proof of him committing impeachable offenses. But we aren’t there yet. There is no smoking gun, and although there is a lot of suspicion and gut feelings about the president having broken the law with the IRS, Fast & Furious and all the other scandals, there isn’t yet any proof. Disliking that fact doesn’t make it any less of a fact.

Republicans excel at snatching defeat from the jaws of victory and are often referred to as “the stupid party” for their lack of political awareness—rightly so, most times. Now, when they are so close, is not the time to follow the advice of people such as Sarah Palin and commit suicide by stupidity.