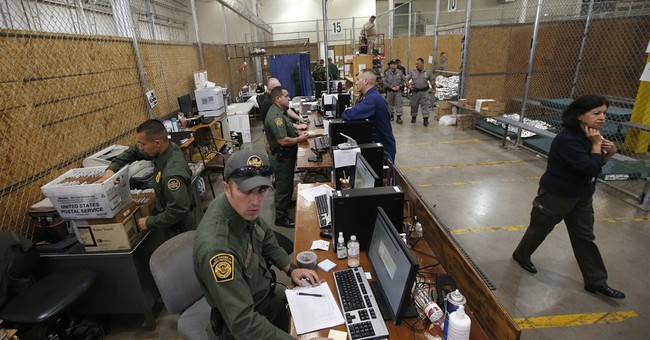 It took 5 1/2 years, but we’ve finally found a law President Obama is willing to enforce as written. It’s the William Wilberforce Trafficking Victims Protection Reauthorization Act of 2008, which passed unanimously in both houses of Congress when they were controlled by Democrats and signed by a Republican president, and was meant to protect victims of child sex trafficking. But the intent behind the law isn’t what the president is following; it’s the letter. Seems he’s put his magical pen and phone away for the time being.

The New York Times describes it this way, “Originally pushed by a bipartisan coalition of lawmakers as well as by evangelical groups to combat sex trafficking, the bill gave substantial new protections to children entering the country alone who were not from Mexico or Canada by prohibiting them from being quickly sent back to their country of origin.” The spirit of the law was reasonable – if children, alone, were found in the United States, it made humanitarian sense to ensure they weren’t smuggled in as part of a child sex ring and that simply sending them back wouldn’t put them back in the arms of monsters.

But the intent of the law is being bastardized to advance the agenda of amnesty.

The children the law intended to protect – potential victims of perverted sex traffickers – are not who is flooding the border now, and the administration knows it. Still, it is using its provisions to slow the process and keep illegal aliens on U.S. soil.

The law requires these children be given an opportunity to appear at an immigration hearing and consult with an advocate, and it recommended they have access to counsel. It also required they be turned over to the care of the Department of Health and Human Services, and the agency was directed to place the minor “in the least restrictive setting that is in the best interest of the child” and to explore reuniting those children with family members. But with tens of thousands clogging the system, it is overwhelmed.

This has the White House claiming its hands are tied; it must follow the law.

Yet, the author of the law, Sen. Diane Feinstein, D-Calif., told the Times, “That law already provides the administration with flexibility to accelerate the judicial process in times of crisis. The administration should use that flexibility to speed up the system while still treating these children humanely, with compassion and respect.”

The administration does not appear interested in doing that.

The president originally called for Congress to change the law so the illegals could be returned to their home countries quickly, but he since has changed his tune. His focus now is on requesting $3.7 billion to increase the number of judges to hear cases and more lawyers to represent the illegals. He wants to speed up a process that was never meant to apply to this wave currently flooding the U.S. He’s also claiming passing “comprehensive immigration reform” would fix this problem, even though it would do nothing to address the current crisis. Never let a good crisis go to waste…

Expediting hearings could decrease the backlog, but it would do so only if the border were sealed. The president has no plans to do that. As such, even if the president gets what he wants, the number of illegal aliens flooding the border would only increase and the logjam would continue to grow.

More troubling is the possibility these expedited hearings could stamp the illegals with legitimacy and grant them amnesty.

The hearings are to determine if these illegals have a claim to asylum. Given his record and his agenda, the president cannot be trusted to fill those judgeships with impartial jurists. Activist judges easily could wave through countless illegals with the stamp of judicial approval, making it nearly impossible ever to remove them.

Simply put, granting illegal aliens access to a legal process never intended for them will grant them a golden ticket into the United States and bypass what the law intended for them – a quick return to their home country. Once you grant illegals access to the courts they will be here forever.

The president is correct that he’s following the law. It’s just not how the law was intended, according to its Democratic author. Congress should change the letter of the law to match the intention of it and do so retroactively, if possible (they can tax retroactively, so it may be possible), so those illegals currently being shuttled across the country at taxpayer expense can be sent back home and apply to enter the country through the legal process.

The Obama administration declared the “borders have in fact never been stronger” just last year. That was not true then, and it obviously is not true now. It’s funny now how a president so boastful of how he will act alone if Congress doesn’t act, refuses to act within the intent of a law he’s cowering behind. He has the power to act in the best interest of the United States now. He just doesn’t have the will.