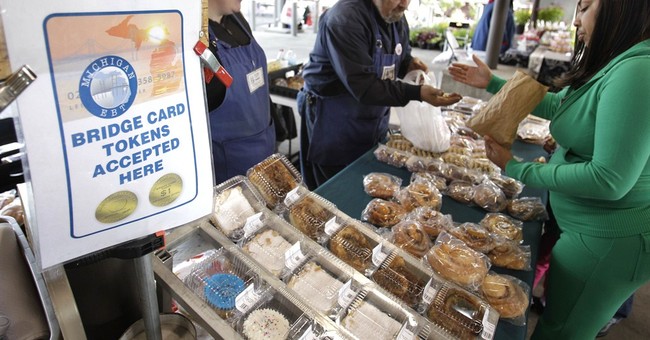 Lost in the news shuffle of the government shutdown and debt ceiling debate this week was the story progressives are quite happy you likely missed. But the story is important to note now, especially since we are on the verge of a massive expansion of the welfare state.

The Electronic Benefits Transfer system went down for a couple of days.

The EBT system replaced food stamps with a debit card to remove the stigma attached to using food stamps and is “reloaded” with a recipient’s government allotment once per month. When the money is gone, it’s gone, until the next month.

Never mind that removing the stigma of food stamps for a credit-looking card was a mistake because a little stigma attached to suckling the government teat might inspire some to do something crazy like, you know, get a job. But that horse left the barn a long time ago.

EBT users know how much they get from taxpayers every month and are generally acutely aware of how much they have left at any given time – it’s printed on the receipt they received when they last used it. But because they know their balance doesn’t mean anyone else does.

EBT cards are run like credit cards to ensure the stores get paid, recipients don’t purchase restricted items such as alcohol and tobacco and they stay within their monthly limit.

When the system went down there was no way for stores to ensure they’d be paid for their goods, so they stopped accepting the cards for a few days. That meant EBT users either had to go without shopping for a couple of days or – gasp – use their own money for food purchases.

Two Walmart locations in Louisiana decided to be good community members and accept EBT cards “without limits,” essentially on the honor system, to help users in a time of need. That’s right, Walmart. The company routinely attacked by the Left for their greed, their pay and simply existing in a way they hate offered to help people (NOTE: They regularly help people, you don’t hear about it because it doesn’t fit the left-wing narrative.) That was a mistake.

Word quickly spread throughout the community and EBT users flocked to the stores. With no limits on how much someone could get using an EBT card, those Walmart stores quickly began to resemble a zombie apocalypse.

“Shoppers” filled shopping carts with literally every item on the shelves of the grocery section of the store – freezers, refrigerators, canned goods, boxes, anything – the stores looked as if they had been looted. And, for all practical purposes, it had been.

After a couple of hours of this frenzy the EBT system came back on-line. This meant the store would be able to check to see if these “shoppers” actually had the ability to pay for their purchases.

Carts overflowing with food were simply abandoned in the aisles; left to rot, left to thaw, just left. The people who filled them like they were contestants on Supermarket Sweep knew they didn’t have the money on their EBT cards to pay for all that food, but they didn’t care. They saw “free stuff” in their minds because that’s what EBT represents – FREE STUFF!

They cared when the system designed to help them survive started to work again, and they ran.

One woman who didn’t run because she didn’t know the system was working again was caught trying to purchase $700 worth of food when she had only $.49 on her EBT card. She knew what she was doing, and she didn’t care. She is entitled.

This is what the entitlement culture creates – a lack of dignity and basic decency.

When you’re used to getting things for free, conditioned and trained to believe this is an acceptable way to live, taking advantage of that is hardly unthinkable.

If you depend on something other than yourself for your subsistence, and by extension your existence, why not exploit an opportunity that presents itself? The government teat gives you enough to get by but not to thrive. Couple that with a political party telling you that if you’re born into poverty the system is stacked against you and you’ll never get ahead, you start to think you’ve “earned” what you’re given. That you deserve it.

If people think they deserve something for simply existing, something someone else earned, why not take more? Just some faceless company is being hurt, not a real person. Never mind that the company was trying to help EBT users – that hand was bitten.

The mentality exhibited by those EBT users would be replicated anywhere any company would allow it. Race, age, gender – none of these variants would make a lick of difference. It’s the entitlement mentality. Most EBT users would not march into someone’s house and steal money from them, but they basically live that way only with the government as the middleman entering people’s houses for them. They don’t see it that way; they’re conditioned to not see it that way. But that’s how it is.

The EBT system is set up to help, to be a safety net for Americans in need. For far too many people that safety net has become a hammock, a way of life. Living off the labor of others, having their existence dependent upon others, perverts basic humanity.

With no requirements or expectations placed on welfare recipients to receive taxpayer money, an entitlement monster gets created. It was unleashed on Walmarts in Louisiana this week by a small segment of the population. If Republicans can’t figure out how to message the importance and virtues of self-reliance and rugged individualism again, the things that made this country great, our very American Spirit, may well end up being the next thing looted.