The Progressive Agenda On Display 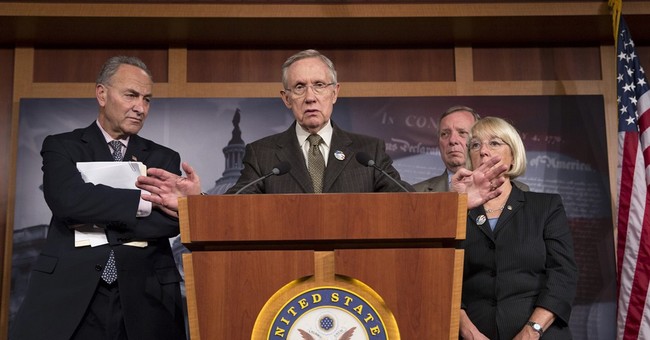 It was not a good week for progressives. Democrats thought they’d be sitting in the catbird seat during a government shutdown, but their own arrogance, World War II veterans, children with cancer and their own words have cost them what they were sure would be a easy victory.

Conceptually, progressives had hoped a government shutting down would send ripples of panic throughout the country, putting pressure on Republicans to give in to their demands. It didn’t. The vast majority of Americans who don’t work for the government, went about their lives as if nothing had happened.

Having learned from the sequestration battle, progressives knew the shutdown needed visible effects, not just theoretical ones. With the closing of public tours of the White House as their guide (and still in place, therefore unavailable to them now), Democrats closed open-air national monuments that are routinely open and unstaffed 24/7, 365 days per year.

The reason they did this is obvious – so media around the world would broadcast tourists upset their vacation plans were ruined by mean Republicans. What actually happened reinforced the old joke: If you want to make God laugh, make a plan.

While tourists were upset, the real story happened at the World War II Memorial. Members of the Greatest Generation weren’t going to let some flimsy gates stand in the way of them paying tribute to their fallen brothers. Nearly 70 years after storming barricades erected by other governments, they again stormed ones erected by their own.

Progressives tried to reinforce the barricades, but the next day they were stormed again.

Attempting to deny veterans in their 80s and 90s their last chance to visit a memorial to themselves, coupled with the threat of arrest, was too much for progressives and they caved. Veterans flown to Washington on “Honor Flights” will be allowed to visit, marking yet another victory for the brave men and women who defeated the forces they battled long ago.

A Park Service ranger told the Washington Times what we’d all suspected: “We’ve been told to make life as difficult for people as we can. It’s disgusting.”

Speaking of disgusting, the second PR disaster for progressives this week was committed by Senate Majority Leader Harry Reid, and it’s even more telling of their nature.

During the gun control debate, progressives repeated the mantra “If it only saves one child’s life, we have an obligation to act.” This child was theoretical, and would be “saved” only in the abstract from some future potential event that could, might, maybe happen. It was a weak argument then, but the “logic” behind it was turned on them.

Dana Bash of CNN asked Reid, who personally had refused to allow a vote on a bill to fund the National Institutes of Health that includes clinical trials for cancer treatment for children, why not just allow a vote on that to help those children?

Reid’s answer was as heartless as it was unsurprising. He said, “Why would we want to do that? I have 1,100 people at Nellis Air Force base that are sitting home. They have a few problems of their own.”

Reid tried to explain away this callous response as a gaffe; that of course he cares about children with cancer. But it was no gaffe. He didn’t just say, “Why would we want to do that?” he equated those children with people who to that point had had two days off of work, saying, “They have a few problems of their own.” Bed sores and “video game thumb” do not equal terminal cancer.

And remember, you don’t participate in clinical trials on a whim. You do so because it’s your last resort. These children are dying. Conventional treatment hasn’t worked, and this is their last hope. Harry Reid and his fellow Democrats are denying that last hope out of obstinacy.

The monument strategy didn’t work. Maybe a body count, especially one with children, will.

If that sounds harsh it’s only because it is. Individuals never have mattered to progressives; they are about the collective. Individuals are replaceable, interchangeable and expendable to progressives. Not those in power, naturally, but the faceless masses and “great unwashed.” History tells this tale clearly.

Under the “progressive” umbrella are fascism, socialism and communism, differing only by a few degrees. The early 20th century infighting between these groups was over which was the standard bearer and which would lead under the progressive banner – and not over ideological differences. And no political philosophy had a higher body count in the last 100 years than the progressive movement.

Hundreds of millions were slaughtered or sacrificed for “the greater good” of the progressive Utopia. What’s a few more kids?

Reid hasn’t backed down on this. He’s still denying those children their last hope, but he’s exposed now. If children die while he’s obstructing their care, he and his fellow progressives in politics and the media will try to spin their deaths as Republicans’ fault. The truth is different, but he’s fine with that. To put it more bluntly: Harry Reid doesn’t WANT children to die of cancer, but he can live with it if it advances the cause.

This was no “gaffe,” this was accidental truth-telling from an unprepared politician so comfortable in the knowledge that the media would have his back that he was thrown by a simple question he should have been prepared for.

On Friday, an Obama administration official was quoted by the Wall Street Journal saying, “We are winning…It doesn’t really matter to us” how long the shutdown lasts “because what matters is the end result.”

This has been the progressive way since its inception – the agenda is what matters, not the individual.

Imagine this: If progressives are willing to obstruct World War II veterans visiting their memorial, if they’re willing to refuse funding for children with cancer to avoid something as simple as a one-year delay in Obamacare or having to live under it themselves, what won’t they do? Remember, they’re taking over all of health care, slowly but surely. If they get it, what’s to stop them from blocking funding for any health care for anyone to get their next dream program in place?

Once you cede power to the government, you aren’t likely to get it back. A political movement willing to sacrifice children to the cause, a political philosophy with hundreds of millions of bodies behind it, will think nothing about adding a few more to the pile.