Dennis Prager
|
Posted: Oct 04, 2016 12:01 AM
Share   Tweet
The opinions expressed by columnists are their own and do not necessarily represent the views of Townhall.com. 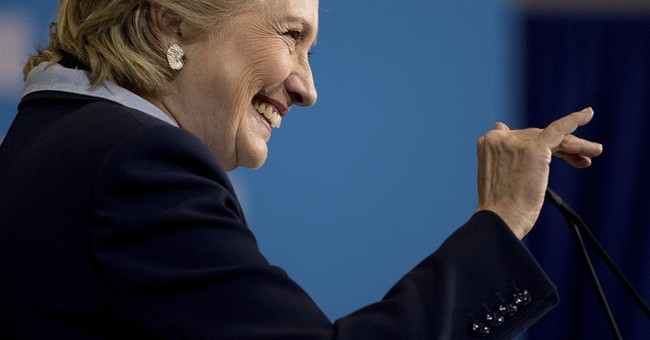 The overwhelming media consensus regarding the first presidential debate -- Donald Trump vs. Hillary Clinton and Lester Holt -- is that Clinton won.

If she did win it was because Trump, after a strong opening 30 minutes, allowed himself to get baited into emotional and tendentious self-defense.

And because the media have decided to focus on the tendentious, such as the utterly moronic issue of whether, in 1996, Trump called then-Miss Universe Alicia Machado "Miss Piggy," almost all the debate analyses ignored many of the most important things each candidate said.

Here are some examples.

Clinton explained how she would expand government control over American life: "We also have to make the economy fairer. That starts with raising the national minimum wage and also (guaranteeing), finally, equal pay for women's work. I also want to see more companies do profit-sharing. If you help create the profits, you should be able to share in them, not just the executives at the top."

It's astonishing how little attention this proposal of forcing companies to give a specified share of their earnings to employees received in the post-debate coverage. It's socialism, bordering on communism.

What she will have the government provide for free is "affordable child care and debt-free college."

She will have it paid for "by raising taxes on the wealthy. "I think," she said, "it's time that the wealthy and corporations paid their fair share to support this country."

Trump described his tax proposal: "Under my plan, I'll be reducing taxes tremendously from 35 percent to 15 percent for companies (and) small and big businesses. That's going to be a job creator like we haven't seen since Ronald Reagan. ... Companies will come. They will build. They will expand. New companies will start."

Is that not important and substantive?

Clinton believes that reducing taxes "is not how we grow the economy." Isn't her economy-crushing view worthy of more attention than "Miss Piggy?"

On the 2008 recession, Clinton was mendacious and demagogic, saying that it "was in large part because of tax policies that slashed taxes on the wealthy, failed to invest in the middle class, took their eyes off of Wall Street and created a perfect storm."

There is no truth to what she said. The bursting of the real estate bubble that caused the 2008 recession had nothing to do with "slashed taxes." It was overwhelmingly caused by her husband, President Bill Clinton, and the Democrats' attempt at social engineering, by forcing Fannie Mae and Freddie Mac and even private banks to provide billions of dollars in home loans to people -- many of whom were minorities -- who could not sustain their mortgage payments as soon as interest rates on their adjustable-rate mortgages were raised. (Had Trump made this point, it would have been a highlight of the evening.)

Clinton described her gigantic-government -- and preposterous -- solution to the sluggish economy: "We can deploy a half a billion more solar panels. We can have enough clean energy to power every home. We can build a new modern electric grid. That's a lot of jobs; that's a lot of new economic activity."

Trump's correct rejoinder was: "She talks about solar panels. We invested in a solar company ... that was a disaster."

Yet there was another Clinton expansion of federal power that went unnoted. She said: "I'm going to have a special prosecutor. We're going to enforce the trade deals we have, and we're going to hold people accountable."

Clinton and Trump discussed her emails.

Clinton said: "I made my mistake using a private email. ... And if I had to do it over again, I would obviously do it differently. But I'm not going to make any excuses. It was a mistake, and I take responsibility for that."

Who won that exchange, American media?

Clinton on race: "Race remains a significant challenge in our country. Unfortunately, race still determines too much ... it determines how they are treated in the criminal justice system. We've just seen those two tragic examples in both Tulsa and Charlotte."

In Charlotte, a black officer killed a black man who wielded a gun after officers -- whose police department is headed by a black man -- repeatedly yelled, "Drop the gun." And yet, Clinton charged the police and America with racism.

If you want more race baiting, America, vote for Clinton.

Why is there so much black-on-black murder?

"We've got to get guns out of the hands of people who should not have them," Clinton insightfully observed, as if there were one American who doesn't want to do so.

Clinton added, "The gun epidemic is a leading cause of death of young African-American men, more than the next nine causes put together." A question for her is, which is more responsible for black males committing murder at a higher rate than any other Americans: too many guns, or too few fathers?

But it was not her gun-based and racism-based explanations of black crime that troubled the American media. It was Trump's responses.

First, Trump said: "Secretary Clinton doesn't want to use a couple of words, and that's law and order. ... If we don't have it, we're not going to have a country."

Second, he correctly noted: "We have a situation where we have our inner cities, African-Americans (and) Hispanics are living in hell because it's so dangerous. You walk down the street, you get shot. In Chicago, they've had thousands of shootings ... Is this a war-torn country? ... We have to stop the violence. We have to bring back law and order. In a place like Chicago ... in fact, almost 4,000 have been killed since Barack Obama became president."

And third, he said: "Right now, our police, in many cases, are afraid to do anything. We have to protect our inner cities because African-American communities are being decimated by crime."

To all of these powerful truths, Clinton could only respond with demagoguery. She said, "Well, I've heard Donald say this at his rallies, and it's really unfortunate that he paints such a dire, negative picture of black communities in our country." She added later, "When it comes to policing ... I have said, in my first budget, we would put money into that budget to help us deal with implicit bias by retraining a lot of our police officers."

That's what America needs -- more federal governance of Americans' lives and more re-education programs. (And what is "implicit bias"?)

Meanwhile, Trump, in his simple way, uttered a truth that I can't recall any Republican has uttered: "Look, the African-American community has been let down by our politicians. They talk good around election time, like right now, and after the election they said, 'See you later. I'll see you in four years.'"

This was another major truth ignored in all the commentary on Miss Piggy and "birtherism." Iraq was finally rendered relatively peaceful, and then Obama announced that America was leaving.

On the Iran deal, Trump was also dead-on: "You started the Iran deal, that's another beauty, where you have a country that was ready to fall ... They were choking on the sanctions. And now they're going to be actually probably a major power at some point pretty soon, the way they're going."

Perhaps my favorite moment of the evening -- also completely ignored -- was Trump's quick reaction to Clinton saying that nuclear weapons "is the No. 1 threat we face in the world." He said: "I agree with her on one thing: The single greatest problem the world has is nuclear armament. ... Not global warming, like you think and your president thinks."

She never responded to this devastating point about left-wing hysteria over global warming. But she did have a lot to say about Miss Piggy, birtherism and Trump's tax returns. And so do her allies: the American media.