If the President Couldn't Tell a Lie 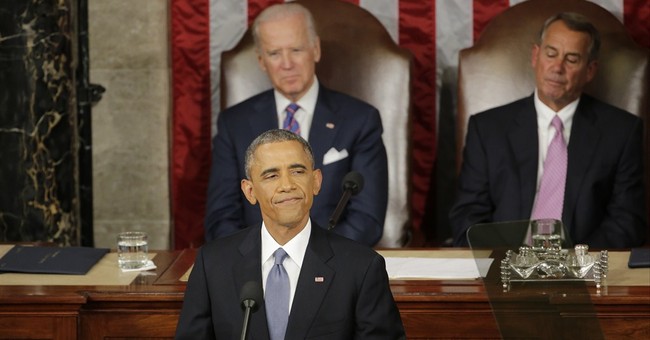 In the famous 1997 movie comedy "Liar Liar," actor Jim Carrey plays a lawyer who, as a result of his young son's birthday wish being magically fulfilled, cannot tell a lie -- he can only tell the truth -- for 24 hours. Let's imagine that such a wish forced President Obama to do the same, not for 24 hours, but only during his State of the Union address.

Here is what he said followed by what he would have said if he could only tell the truth.

President Obama (PO): "Six years ago, nearly 180,000 American troops served in Iraq and Afghanistan. Today, fewer than 15,000 remain. And we salute the courage and sacrifice of every man and woman in this 9/11 Generation who has served to keep us safe."

Honest President Obama (HPO): "While I salute the courage of all the Americans who served there, my withdrawal has rendered their sacrifices meaningless. I made it possible for the Islamic State to rise, to control Mosul and other areas of Iraq, and enabled Iran, the most dangerous country in the world, to fill the void we left."

PO: "The shadow of crisis has passed, and the State of the Union is strong."

HPO: "The shadow of my crisis has passed. I was re-elected, my approval ratings are stable, and the 2014 elections that held me back from doing whatever I want to do are done with. As regards America and the world, however, the shadow of crisis is probably darker than at any time since World War II. And what I really meant when I said the State of the Union is strong is that the State of the Government is strong. The government controls more of Americans' lives than ever before."

PO: "Will we accept an economy where only a few of us do spectacularly well?"

HPO: "I know that in every country in the world only a few do spectacularly well. And as long as some human beings have more ability, work harder, and/or have more luck than others that will always be the case. So why did I ask this pointless question? Because it foments class anger."

PO: "Will we allow ourselves to be sorted into factions and turned against one another?"

HPO: "In my six years as president it is we Democrats who have sorted Americans into factions -- blacks against whites, women against men, and the poor and middle class against those who are richer -- more than at any time in American history. How else can a Democrat win an election? If blacks don't resent whites, women don't think they are being suppressed by male sexism, and the 99 percent don't resent the one percent, Democrats will never win an election."

PO: "In two weeks, I will send this Congress a budget filled with ideas that are practical, not partisan."

HPO: "Only Republicans' ideas are partisan, not Democrats'."

PO: "So tonight, I want to focus less on a checklist of proposals, and focus more on the values at stake in the choices before us."

HPO: "Actually almost my entire speech is a checklist of proposals."

PO: "America is number one in oil and gas. [...] And thanks to lower gas prices and higher fuel standards, the typical family this year should save about $750 at the pump."

HPO: "Fracking -- which my administration has tirelessly worked against -- has made all this possible."

PO: "These policies will continue to work as long as politics don't get in the way. [...] And if a bill comes to my desk that tries to do any of these things, I will veto it. It will have earned my veto."

HPO: "When a Republicans pass bills, I call it 'politics.' But when I veto those bills, that's not politics. Once again, thank you, mainstream media!"

PO: "We gave our citizens schools and colleges, infrastructure and the Internet."

HPO: "That's what we on the left believe: Whatever you have the government gave you."

PO: "Too many bright, striving Americans are priced out of the education they need."

HPO: "Of course, the real problem is the extortionist tuition rates charged by four-year colleges -- that we make possible through government-backed student loans."

PO: "Our diplomacy is at work with respect to Iran, where, for the first time in a decade, we've halted the progress of its nuclear program. [...] I will veto any new sanctions bill that threatens to undo this progress."

HPO: "Everyone knows that Iran intends to build a nuclear weapon. Nevertheless, I will do everything I can to postpone confronting Iran and to postpone an Israeli attack on Iran. Then my successor can deal with it."

HPO: "In this case, I actually said something I believe. I really am more preoccupied with what computer models tell us might happen to ocean levels in 50 years than I am with the Islamist threat to the world today."