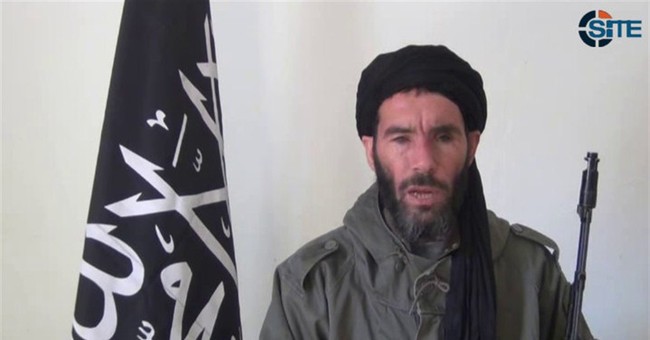 The alleged butcher of the off-duty British soldier, Drummer Lee Rigby, defended his carving up of a living human being by claiming that he was engaging in "an eye for an eye" because the British army is killing Muslims in Afghanistan.

This is true even though a large majority of Muslims do not support terror and even though leftists do not support it. Nevertheless, throughout the Muslim and leftist worlds it is believed -- and our children are taught this at college -- that America, the UK. and other countries are targeted by Muslims because we kill Muslims.

The argument is morally perverse and a lie.

First, the U.K. and others are in Afghanistan in order to defend Muslims. Brits and other Westerners are risking their lives, and dying, in that country on behalf of Muslims.

Here's a question for Muslims and leftists who buy this argument about the West killing Muslims in Afghanistan: Who are we fighting in Afghanistan?

I thought the Brits and Americans were fighting the Taliban, the people who throw acid in Muslim girls' faces for attending school, the people who murder nurses who inoculate Muslim children against disease. Now, if fighting the Taliban is to be equated with fighting Muslims, this is a real contradiction of everything much of the Islamic world and virtually all of the left have been contending for years -- that the Taliban represent a tiny group of extremists in the Muslim world, and that they have so completely perverted Islam that they cannot even be called Muslims.

Well, you can't have it both ways. If killing the Taliban is the same as "killing Muslims," then you can't argue that the Taliban don't represent Islam or Muslims.

So, on the issue of the West fighting in Afghanistan, the Muslims and the left need to make up their minds: Is killing the Taliban a service or a disservice to Muslims? This is the first and last question both groups need to answer. Everything else is commentary.

Second, if any group here should be entitled to exercise an eye for an eye, wouldn't it be Christians? It is Christians who are being murdered, and whose communities are being decimated, in the Muslim world. Christians have lived in the Middle East -- in places such as Iraq and Egypt -- since long before Muhammad was born. It is Christians in Nigeria who are routinely slaughtered by Muslims. And it is Christians in Pakistan who are burned alive in their churches.

And what about the 52 Brits blown up by Muslim terrorists in the U.K. on July 7, 2005? How is it that not one Brit decided to take an eye for an eye against any Muslim?

And there's a third lie to this claim of Muslims as victims of the West.

Nearly every one of the tens of thousands of Muslims killed in the last few years has been killed by other Muslims -- in Syria and Iraq in particular.

There is something of great significance to be learned from this. In the Muslim world today, it is hatred of the West, not love of -- or even concern for -- fellow Muslims, that animates Muslim atrocities and terror against the West. Just as it is Arab hatred of Israel, rather than Arab love of fellow Arabs that animates the Arab world.

Every Muslim and every Western leftist who perpetrates the lie about the West killing Muslims as the source of Islamist terror abets that terror.