What I Said to the Republican Members of Congress 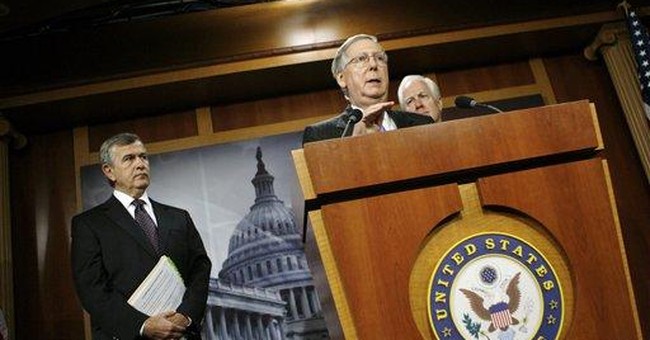 This past weekend, after President Obama addressed the annual retreat of Republican Members of the House, I, along with my Salem Radio colleague Hugh Hewitt, and John Fund of the Wall Street Journal, were also invited to address them.

This is an abridged and edited version of my remarks.

Thank you for this honor.

I have never been as proud to be a Republican as I have this past year with your unanimity in opposing Obamacare and the other bills that would transform America. Please know -- you need this feedback -- that your having been able to stand together and do this has been a luminous moment in Republican Party history.

I would like show you some of the large themes involved in your present work.

First theme: It is harder to sell truths than to sell falsehoods.

John Rosemond, who writes books on child rearing, says that the most important vitamin you can give to a child is Vitamin N, his term for the word "No." You have given America Vitamin N.

America needs it terribly because of another way in which God has stacked the deck against the fight for goodness in human history: Every change for good must be constantly renewed, but changes for the worse are often permanent. Goodness must be fought for every day, over and over. That is why every American generation has to be inculcated with American values. But once the change for bad is made, it is close to irreversible. The Democratic attempt to vastly expand the state's power would likely be a permanent change for the worse in American life. When they're candid, they admit that the health care bill is their way to get to single-payer medicine and, more importantly, to a government takeover of another sixth of the American economy.

You have to know how important your work is, and how many of us know this.

I'll give you two examples.

This Jew battled to keep the cross in the Los Angeles County seal. Liberals and leftists in California fought to remove the smallest image -- a cross -- from the county seal. Through my radio show, on a day's notice, we gathered about a thousand people to demonstrate at the Los Angeles County Board of Supervisors when the board voted. The vote went along ideological lines: three liberals to two conservatives, to remove the cross.

The other example is what is now happening with Scott Brown's victory in Massachusetts. Everybody knows why he was voted in. It was, after all, Scott "41" Brown. We all knew why he was elected. But if you read left-wing commentators, this history is being rewritten. They say it had nothing to do with opposing Obamacare. Nothing to do with it! In the Soviet Union, it took 10 years to write Trotsky out of the Russian Revolution. But this is a rewrite of history in one week! Scott "41" Brown's victory was not about opposing Obamacare.

In fact, the Left argues that the Massachusetts voters were for the health care bill, but simply "wanted to send a message" to Washington. I must say the voters of Massachusetts are not only not bright, they must be truly stupid if they are for Obamacare and send the man who will undo Obamacare as a protest on behalf of Obamacare. This is what we are told by the Left.

Third theme: Most people on the Left are True Believers. This is critical to understand. They are willing to lose Congress; Nancy Pelosi and Harry Reid are prepared to lose both houses to get this through. Why? Because losing an election cycle means nothing compared to taking over more of the American economy.

I can give you an example from our side. There are many folks on our side who, if they could pass an amendment against abortion, would happily sacrifice both houses for a period of time. Understand that just as strongly as some are pro-life or religiously Christian or Jewish, that is how strongly many leftists believe in leftism. Leftism is a substitute religion. For the Left, the "health care" bill transcends politics. You are fighting people who will go down with the ship in order to transform this country to a leftist one. And an ever-expanding state is the Left's central credo.

And finally, theme four: I have a motto that I offer to you because this is the ultimate moral case for us: "The bigger the government, the smaller the citizen."

We have to learn to make our complex beliefs simple -- though never simplistic. And this is our powerful response to government doing more and more for people: "The bigger the government, the smaller the citizen."

And here's how we explain it: The bigger the government, the less I do for myself, for my family and for my community. That is why we Americans give more charity and devote more time to volunteering than Europeans do. The European knows: The government, the state, will take care of me, my children, my parents, my neighbors and my community. I don't have to do anything. The bigger question in many Europeans' lives is, "How much vacation time will I have and where will I spend that vacation?"

That is what happens when the state gets bigger -- you become smaller. The dream of America was that the individual was to be a giant. The state stays small so as to enable each of us to be as big as we can be. We are each created in God's image. The state is not in God's image, but it is vying to be that. This is the battle you're fighting. You are fighting a cosmic battle because this is the most important society ever devised, the United States of America.

You can easily forget the big picture -- how could you not? You're there every day, battling. You are in dense jungle -- excuse me, rainforest -- you are in a rainforest/jungle, fighting, and I am, because of the nature of my work, in a little helicopter above the jungle telling you what it is you are fighting. America really is the last, best hope of mankind.

That is how important I consider the fights that are going on now, especially with regard to the takeover of health care. How can they, with a serious face, tell us that Medicare and Medicaid and Social Security are going bankrupt, and therefore the solution is to take over more of health care? How does one say that with a straight face? How does one look a fellow American in the eye and say, "Yes, we have failed in almost every way that government has significantly intruded, and that's why we need more government intrusion"?

It is mind-boggling. But that is what has happened. People get smaller and pettier, as the government and state get bigger. That's what you are fighting. And that's why I came to tell you this is the proudest moment in my life as a Republican. Thank you for doing what you are doing.