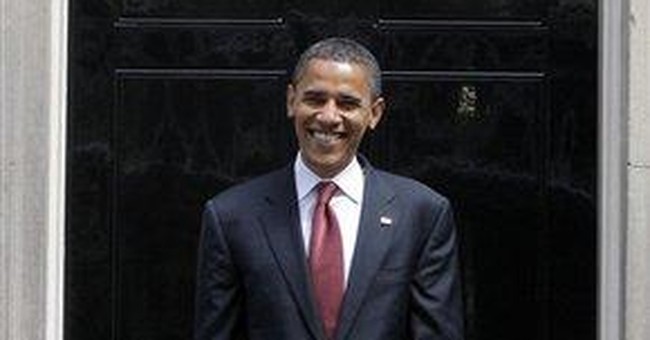 To better understand Sen. Barack Obama, his speech before 200,000 Germans in Berlin is one good place to start. As we shall see, however, it does not leave one secure as to the senator's understanding of history, of America's role in the world, and what to do about evil, among other important issues.

Obama: "At the height of the Cold War, my father decided, like so many others in the forgotten corners of the world, that his yearning -- his dream -- required the freedom and opportunity promised by the West."

Promised by the West? Or promised by America? It wasn't "the West" that Obama's father went to; it was America. During the Cold War, it wasn't "the West" that led the fight to preserve Western freedom; it was America. Obama concedes this point in his next sentence: "And so he wrote letter after letter to universities all across America until somebody, somewhere answered his prayer for a better life."

Obama's speech was a paean to the West and especially to Germany in fighting for freedom during the Cold War. Throughout his speech he equated the German contribution to defeating Communism with that of America

Obama: "And you know that the only reason we stand here tonight is because men and women from both of our nations came together to work, and struggle, and sacrifice for that better life."

It is understandable and even expected that an American speaking in Germany will praise Germans. But even so, it is quite an exaggeration to state that the "only reason" he and they are standing in a free Berlin is because men and women from both countries sacrificed for that better life. Americans sacrificed far more than Germans. The sad truth is that, with some heroic exceptions, Germans on the right supported Hitler, and during the Cold War, Germans on the left fought the Unites States more than they fought the Soviet Union. When Ronald Reagan came to Berlin, tens of thousands of Germans -- many of them, one would surmise, of a similar mindset to those who came to hear Barack Obama -- protested his visit.

Obama: "The size of our forces was no match for the much larger Soviet Army. And yet retreat would have allowed Communism to march across Europe."

How is one to explain this? I have long believed that many liberals recognize evils only after the evil has been vanquished. Today, Democrats like Obama in his speech, regularly revile Communism. But from the late 1960s until the end of the Cold War they rarely judged Communism. They judged anti-Communists. Liberal Democrats routinely call Communism evil today, but when it was actually a threat, they reviled those who called Communism evil. Again, recall Ronald Reagan and the virtually universal liberal condemnation of his calling the Soviet Union an "evil empire."

So, too, now, regarding today's greatest evil, to cite but one example, not one Democrat in any of their party's presidential primary debates used the term "Islamic terrorism."

Obama: "Where the last war had ended, another World War could have easily begun. All that stood in the way was Berlin."

In his attempt to exaggerate the role of Berlin before his large Berlin audience, Obama made a claim that simply makes no sense. "Berlin stood in the way" of another World War beginning? How? If anything, Berlin was the flash point of East-West tension and therefore could have triggered a war.

Obama: "People of the world -- look at Berlin! Look at Berlin, where Germans and Americans learned to work together and trust each other less than three years after facing each other on the field of battle."

Germans and Americans "learned to work together and trust each other" only thanks to the fact that America and its allies vanquished Germany, overthrew its Nazi leadership, imposed democracy and freedom on Germans, and kept plenty of soldiers in Germany. Why does Obama not apply this lesson to Iraq? If Americans and Iraqis learn to work together and trust each other, it will also be thanks to America and its allies vanquishing the Islamic terrorists, overthrowing the Nazi-like regime of Saddam Hussein, imposing democracy and freedom on Iraqis, and keeping soldiers in Iraq for as long as needed.

Obama: "Look at Berlin … where a victory over tyranny gave rise to NATO, the greatest alliance ever formed to defend our common security."

Obama did not want to offend his hosts by inserting an element of reality here: Many of America's NATO partners have been largely worthless in confronting evils from Communism to al-Qaida to the Taliban. A few weeks ago, leading German newsweekly Der Spiegel reported that German forces in Afghanistan are under strict orders not to shoot any Taliban forces unless shot at first. As a result, they refused to shoot a major Taliban murderer whom they had in their sights because his forces had not shot at the Germans and therefore allowed him to escape.

Obama: "People of the world -- look at Berlin, where a wall came down, a continent came together, and history proved that there is no challenge too great for a world that stands as one."

The wall came down because America stood strong, not because the world stood as one. What he said here is John Lennon-like fantasy, the opposite of reality, and as such, coming from the man who may well be the next president of the United States, a bit frightening.

Obama: "While the 20th century taught us that we share a common destiny, the 21st has revealed a world more intertwined than at any time in human history."

If the 20th century did teach something, it taught that evil must always be fought.

The speech reveals a man who has good will and noble desires, but who may be dangerously naive regarding the lessons of history and what to do about evil.