Here's How to Avoid Climate Panics

Dennis Avery
|
Posted: Aug 07, 2017 10:01 AM
Share   Tweet
The opinions expressed by columnists are their own and do not necessarily represent the views of Townhall.com. 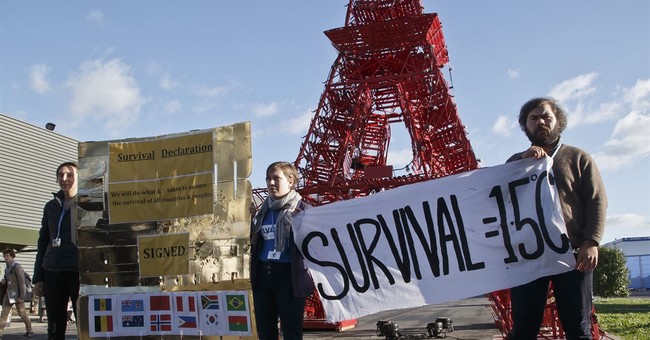 Americans have suffered needless climate-related panic for the past 40 years—not realizing that, since 1850, our newspapers have given us a climate scare about every 25 years. And none of them was valid.

Fortunately, climate science is now good enough to predict the key abrupt climate cycles that Mother Nature visits upon earth through the millennia. After the cold of the Maunder Sunspot Minimum at 1715, for example, earth’s temperature warmed 0.3 degrees in less than 25 years. Then two centuries later, the temperatures dropped equally swiftly into the cold of the Dalton Minimum. These abrupt shifts occurred over decades rather than centuries. Some shifts have been favorable, an equal number were unfavorable – and none involved carbon dioxide.

In 1895, some scientists volunteered that another Ice Age was starting. In 1922, the Washington Post carried a major AP article on Arctic melting! (The paper hasn’t reminded us of that one lately.)

Newsweek predicted an Ice Age again in the 1970s. And since 1988 we’ve had a worldwide media “consensus” that the world will soon be too hot for humans or wildlife to survive. This despite the lack of any significant global warming in the past 20 years! The newswriters, however, are trying to “predict” the climate by extending temperatures from the last five years. In a straight line, though temperatures never move in a straight line.

The ice records and geology tell us Earth is continuing the same erratic climate stability it has shown for millions of years. Earth is ruled by cycles dictated from our massive sun and its biggest planets. Small orbital changes for these heavenly bodies force major, abrupt climate changes on our relatively small planet – whether we’re burning fossil fuelsor not. CERN, the world’s top particle physics laboratory, recently completed an intensive study of earth’s cloud chemistry. CERN noted that the Earth has warmed, persistently but erratically, since 1715 (the coldest part of the Little Ice Age). This 300-year warming is part of the same natural cycle that brought us the Little Ice Age and the Medieval Warming.

Earth may warm somewhat further in the century ahead, but CERN doesn’t predict the infamous runaway warming guessed by computerized climate models. In fact, warming surges statistically identical to Al Gore’s 1976–1998 event have happened countless times through the ages, most recently between 1860–1880 and 1915–1940.

Here are the five key cycles that we know will impact our Earth in the foreseeable future:

The 90,000-year Ice Age Cycle. There’s no dispute over this one. It is the biggest cycle, and the biggest danger to humans. The last four Ice Ages averaged 90,000 years each. Interglacials, like ours, last only 10,000–30,000 years, and it has been about 14,000 years since the last glacial maximum began to warm. We can’t predict when the next Ice Age will hit, but we know it will come slowly. The Arctic needs thousands of centuries to build the vast ice sheets. We have lots of time for new research and, hopefully, new technologies that can reduce or buffer the harmful-to-disastrous effects.

The 1,500-year Dansgaard-Oeschger Cycle is also accepted by both sides in the debate. (Though the alarmists claim that CO2 took command of our climate in 1976.) We’re in a warming phase of the D-O right now, with weather about as good as earth has ever had. Most of humanity’s progress comes during such warmings. The warming raises earth’s average temperature only 1–2 degrees, but we also get notably stable and helpful weather.

CERN’s CLOUD experiment importantly revealed that the Dansgaard-Oeschger Cycle is controlled by cosmic ray strikes. When the sun is active (indicated by more sunspots), fewer cosmic rays hit our atmosphere. Thus fewer clouds are created. Without much cloud-shade, the Earth warms. When the sun is weak, as in the Little Ice Ages, lots of cosmic rays hit the earth. Vastly more clouds appear. (The old masters’ paintings from that time typically show heavily overcast skies in the cold.) CERN’s findings strongly suggest that the sun is continuing to dominate earth’s climate. CO2 matters, but its extent is probably only about 1 degree C. That’s significant, but not dangerous.

The “little ice age” that follows this warming will be dominated by cold and chaotic weather, with short, cloudy growing seasons, untimely frosts, centuries-long droughts and horrendous floods. The temperature gap between the Arctic and the equator will widen by up to 10 degrees C, making the storms perhaps three times worse. (Examples: A giant storm in 1588 sank nearly a hundred of the fine ships of the Spanish Armada; on the Scottish Coast in 1694, a hurricane covered a whole county with sand dunes overnight.)

The “little ice ages” kill off more humans than any other natural disaster. Cultures around the world have failed, again and again, as the chaotic cold prevented farmers from harvesting enough grain to feed their cities. During past “little ice ages,” humans also suffered rampant epidemics of diseases such as cholera and bubonic plague.

The cycles always turn. The big question is whether our next abrupt climate shift will bring a desperate Ice Age or a much milder “little ice age.” Fortunately, our high-yield modern farming technology can probably feed most of the world’s population through a few centuries of “little ice age” bad crop weather. Especially since birth rates will continue to fall with declining death rates. The additional CO2 in the atmosphere will also keep on “fertilizing” the plants. We’ll still need new agricultural research to spare land for nature, and more infrastructure in third world countries. The long droughts will require extensive food relief in stricken regions—or even resettlement. But these are now challenges, not disasters.

The 60-year Pacific Decadal Oscillation: All those failed predictions of oncoming climate disasters are mostly due to this single abrupt-but-moderate climate pattern. We didn’t recognize the PDO until 1996 when fishery experts realized that, when the salmon became scarce in the Columbia River, there were huge salmon schools in the Gulf of Alaska. And vice-versa. The Pacific Ocean was moving the salmon food, in phases that last about 30 years each. No wonder we have had a climate scare “about every 25 years”!

Today’s warming hiatus, though apparently “inexplicable” to alarmists, is only another Pacific cooling. This one started about 2002, and the fishery guys expect it to last until about 2032.

The 200-year Solar Sunspot Minimums: Our sun currently has fewer sunspots than at any time in the last 100 years. The Maunder Sunspot Minimum (1645–1710) caused terrible famines during the Little Ice Age, but historians tended to ignore sunspot minimums during global warmings; they didn’t cause major famines. A recent re-examination of the sunspot record found that the solar minimums drop Earth’s thermometer readings sharply for about 60 years - - every 200 years.

The Dalton Minimum, which delivered London’s cold misery in the Charles Dickens’ novels, ended about 1820. Now we’re due again. A broad group of solar experts now predicts a sunspot minimum sometime around 2040.

Between the ongoing Pacific Oscillation and the oncoming Solar Minimum, the Earth will likely go a full century (1998 to 2100) with no global warming. Could James Hansen’s 1988 prediction of soaring future earth temperatures have been more radically wrong? Or Al Gore’s?

The El Nino Cycle is short, dramatic, and not very important—except it triggered the last two sharp spikes in earth’s temperatures (1998 and 2016). El Ninos warm the Pacific about 2 degrees—but cool quickly back down again over the next year. During the recent El Ninos, alarmists claimed the Earth was re-starting its long-predicted drastic warming. They were wrong again.

Knowing what major climate cycles are coming, and roughly when, should enable us to better prepare for inevitable events. That should cut costs and boost survivability. In sharp contrast, the costs of our current public climate panic have been enormous. We’ve spent many billions of dollars on computer models that don’t predict, and on misguided CO2 “research” that found no answers. Trillions are being spent on subsidies for needless giant wind turbines, solar panels made with rare earths, and huge swathes of biofuel crops. The cost of meeting the Paris Accord requirements is estimated at $1 trillion per year! The alarmist vision of our “Big Brother future” is right out of George Orwell’s brilliant and brittle novel, 1984!

Now, armed with the knowledge of the five cycles, we don’t need to send our modern lifestyles back to 1850. Or put our futures in the hands of unelected activists and bureaucrats who seem eager to “ration” renewable energy to us commoners. The predicted $1 trillion annual cost of the Paris “agreement,” invested privately in third world infrastructure, could eliminate most poverty in the world. But the Paris Accord won’t make even a measurable difference in Earth’s temperatures for 2100!

Dennis Avery is an environmental economist who served as a senior analyst for the U.S. State Department. He is the author of Saving the Planet With Pesticides and Plastic, and co-author with astrophysicist Fred Singer of Unstoppable Global Warming: Every 1,500 Years. His forthcoming book. Cultures of Collapse: the Deadly “Little Ice Ages,” examines the human cultures that collapsed during the cold and chaos of the past “little ice ages.”