Dennis Avery
|
Posted: Feb 22, 2017 1:03 PM
Share   Tweet
The opinions expressed by columnists are their own and do not necessarily represent the views of Townhall.com. 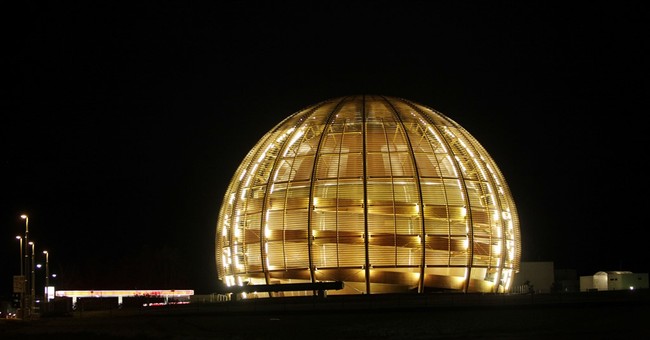 We’re told “the science is settled” on global warming and that “97 percent of scientists” agree that humans are to blame. Meanwhile, climate models continue to predict nearly three times as much warming as is recorded on earth. Why the huge disparity?  CERN (The European Organization for Nuclear Physics) says now it knows.

In 2016, London’s Express carried a startling headline on CERN’s recent study of interactions between cosmic rays and the clouds that let varying degrees of solar heat warm our planet. “Has climate change been disproved? Mankind’s burning of fossil fuels may not be the primary cause of global warming. . .” The Express ventured that the experiment “might turn the whole climate change debate and projected temperature increases upside down.”

The rest of the media—and the alarmists--ignored CLOUD.

Now, CERN has just informed its community of researchers that its CLOUD Experiment suggests “estimates of high climate sensitivity [to CO2 changes] may have to be revised downwards.” That’s from lead author  Ken Carslaw, quoted in the CERN Courier (Dec., 2016).

We already know, from the Old Masters’ paintings in the world’s museums, that the Medieval Warming skies were generally sunny. Little Ice Age skies, in sharp contrast, were painted as heavily overcast. But what links the sun and earth’s sharp changes in cloudiness?

In 2008, Henrik Svensmark of the Danish Space Institute filled a cloud chamber with the earth’s atmospheric gases, and turned on a UV light to mimic the sun’s ultraviolet heat. He was amazed at how fast the chamber filled with myriad tiny cloud seed particles.

CLOUD used the Large Hadron Collider as its source of cosmic rays, along with a super-clean stainless cloud chamber, to carry Svensmark’s experiment to the next level. CLOUD found that the computerized climate models had underestimated the cloudiness of the Little Ice Age, because they completely failed to understand the dramatic impact of the ionized cloud seed particles created by cosmic rays! The electric charge on the could seeds attracts other molecules in the atmosphere, so the cloud seeds grow instead of evaporating,

In a related Nature article, CERN’s Jasper Kirkby says that ions from cosmic rays increase the number of cloud seeds by one to two orders of magnitude.  In addition, the ionized clouds reflect more solar heat back into space—and they’re longer-lasting.  The cloud variations thus amplify the sun’s variability! That’s why earth had a sunny Medieval Warming and an overcast Little Ice Age.  Clouds, in effect are the earth’s thermostats—and the IPCC has admitted it can’t model them! (The models also started with the year 1850, shutting out most of the earth’s long history of abrupt climate changes.)

Another climate factor has also confused us. The 30-year phases of the Pacific Decadal Oscillation—not recognized until 1996— tricked us into believing during the 1970s that we faced another Ice Age. Then, after 1988, a warming PDO had us worried about a parboiled planet. Most recently, we’ve had the 20-year “hiatus” in our global warming. The modelers say the heat is still building up in the depths of the ocean, building toward another warming “surge”—thus violating the law of physics that says warm water rises. If the non-warming is due to the PDO, however, it will likely last at least until 2030. When the warming resumes, it will be significant but not dangerous.

Does this latest science spell the end of the world’s horribly expensive CO2 panic? Why aren’t the Left and the media welcoming this new high-tech science as eagerly as they did the computer models that have clearly failed?

Statistician Bjorn Lomborg just estimated we’d have to spend $100 trillion on renewables to cut global warming by merely 0.3 degree in 2100--assuming the CO2 models are correct. Can President Trump’s doubts about man-made warming save us from Lomborg’s pattern of terrifying waste?