Debra J. Saunders
|
Posted: Jan 05, 2020 12:01 AM
Share   Tweet
The opinions expressed by columnists are their own and do not necessarily represent the views of Townhall.com. 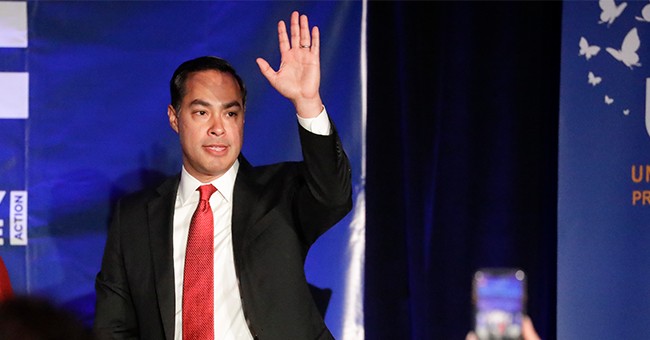 WASHINGTON -- Former Housing and Urban Development Secretary Julian Castro announced Thursday that he was bowing out of the 2020 Democratic primary. The only reason to notice or care is that Castro was one of the more shrill candidates, so it's good that he never found purchase in the crowded field and hence had to "suspend" his campaign.

Like Kamala Harris, the California Democratic senator who dropped out in December, Castro has been part of the left's "cancel culture" that seeks to silence those with differing views rather than to debate in the marketplace of ideas.

Harris tried to stand out in the primary by telling Twitter to cancel President Donald Trump's account "as a matter of safety." She must have known the stunt would fail, but clearly figured that advocating to censor a Republican president was a shrewd career move.

Amen to that not working.

Over the summer, Rep. Joaquin Castro, who is the former HUD secretary's twin brother and closest ally, tweeted the names and occupations of 44 constituents in his San Antonio district who had contributed the maximum amount -- $2,800 per election -- to the Trump campaign.

Their contributions, the House Democrat explained, "are fueling a campaign of hate," and he argued that the anti-immigrant manifesto written by the El Paso shooter who left 22 innocents dead "could have been written by the people that write Trump's speeches." The former HUD secretary explicitly supported his brother naming names.

From the start, the congressman was wrong to link Trump to the El Paso shooter. The shooter said he reached his views on what he called a "Hispanic invasion" before Trump launched his 2016 campaign. There is no linkage here, only political opportunism.

Widening the circle of blame to Trump donors only expands the list to include more people who had absolutely nothing to do with the El Paso slaughter. Why would anyone who is duly appalled at those murders want to do that?

On MSNBC's "Morning Joe," Castro argued it was not his intent that Trump donors be harassed; besides, donor names are public record. "What I would like for them to do is think twice before supporting a guy who's fueling hate in this country," he said.

That's the classic guilt-by-association tactic that hangs on the lie that all Trump supporters must be racist.

Know that when a congressman tweets the names and other information about Trump donors, he is inviting intolerant co-believers to lash out at Trump supporters in inappropriate ways.

It's amazing how often partisans who say they want to stop hate and protect the innocent are happy to throw gasoline on the fire in a quest to establish their moral superiority.

And that's no way to win in 2020, by going after Trump donors for fueling hatred.

Former President Barack Obama understands that. At an event in Chicago in October, Obama admonished younger voters for demanding purity and jumping on social media to show how "politically woke" they are.

"The world is messy. There are ambiguities," Obama noted before he panned those who believe "the way of me making change is to be as judgmental as possible about other people."

Obama called out those who tweet against others for something they said and then pride themselves for being so strong on social justice. "That's not activism," Obama added. "That's not bringing about change."

The exit of Castro and Harris also shows that excelling in the smug factor is not the ticket to winning the Democratic nomination.