No Safe Space to Shoot Up

Debra J. Saunders
|
Posted: Apr 10, 2016 12:01 AM
Share   Tweet
The opinions expressed by columnists are their own and do not necessarily represent the views of Townhall.com. 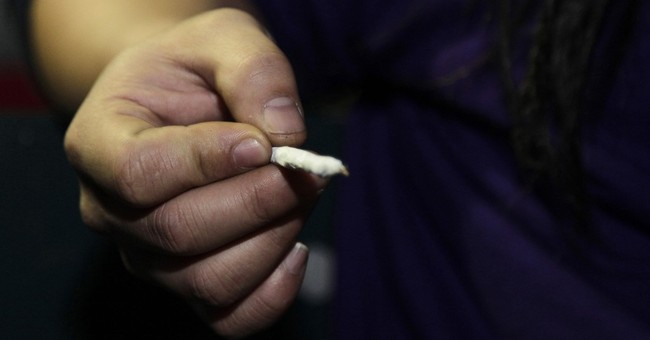 Trending
Larry Campbell, a former cop and former mayor of Vancouver, British Columbia, was appalled as he came to San Francisco to advocate a bill that would allow California cities to open safe injection centers like the one in his city for intravenous drug users. He'd "never seen the number of people sleeping on the street," he told the San Francisco Chronicle editorial board, that he saw as he walked a few blocks from his Market Street hotel. He saw open drug dealing. "There's nobody hiding here."

I asked Campbell whether he thought he should have seen some arrests. "Yes," he responded. "I think you need to get control." Campbell says he saw only two police officers. In Vancouver, you'd see many more police, and they'd direct addicts to Insite, he said.

No other North American city has opened a "supervised injection site" since Insite opened its doors in 2003, but that may be about to change. Ottawa is looking at opening similar facilities. Ditto Ithaca, New York. California Assemblywoman Susan Talamantes Eggman has introduced a bill to allow California cities to open up such facilities, even though drugs such as heroin and other injected controlled substances will remain illegal under federal law.

"I can tell you bluntly, there is no downside," Campbell, now a Canadian senator, told the Chronicle. Crime did not rise in the blocks closest to Insite. Needle litter is down. Users enter the clinic with their own illegally obtained drugs, avail themselves of clean syringes and other paraphernalia, and then shoot up in a safe, clean environment away from the streets. Users have access to a detox center and treatment referrals. There have been 2 million injections since Insite opened, but not a single overdose death.

Why should San Francisco follow suit as Supervisor David Campos proposes? (Mayor Ed Lee is opposed.) Campbell asked rhetorically, "Can it get any worse?" Over the phone, Campos said the same thing.

If there's one thing I've learned working in San Francisco, it's that when you think things cannot get worse, they can. And do.

California Assemblywoman Melissa Melendez opposes the Eggman bill for a host of reasons. She sees the notion as "enabling" and can't believe anyone wants to use tax dollars "to pay medical personnel to watch people shoot up." Surely, there are better uses of tax dollars -- such as rehabilitation programs.

I worry about how programs keep moving the bar to accommodate increasingly self-destructive behavior.

In 1997, I visited a San Francisco needle exchange center in the Mission and was impressed by what I saw. Users brought carefully bundled used needles -- 1,615 of them -- and thus showed they cared enough to take care of themselves. The mantra of social workers, which Eggman repeated to me over the phone, is essential: "Every life matters." In exchange for showing up and responsibly disposing of their needles, users received clean syringes and the chance to have a volunteer treat an abscess and give them vitamins and a medical or treatment referral. The San Francisco AIDS Foundation credited the program with helping to prevent pediatric AIDS cases in the city in 1995 and 1996.

Over time, San Francisco's needle exchange program morphed into a needle access program, as users no longer had to produce a dirty syringe to get the first 20 clean needles. With heroin use up across the nation, these days you see dirty needles everywhere. They are a public safety hazard for the non-using public.

Campbell lauded Insite for providing clean paraphernalia and access to treatment and medical care. The needle exchange centers of the 1990s provided all that. Needle exchange became needle access not to improve care but to accommodate users who couldn't get it together enough to return their used needles. The needle, if you will, has kept moving to make dysfunction easier for self-destructive people.

"If it doesn't work, shut her down," Campbell said when questioned about the probable success of a proposed San Francisco injection center. Nice try, but hitting the brakes is not a skill in which City Hall is practiced.