Debra J. Saunders
|
Posted: Jan 17, 2016 12:01 AM
Share   Tweet
The opinions expressed by columnists are their own and do not necessarily represent the views of Townhall.com. 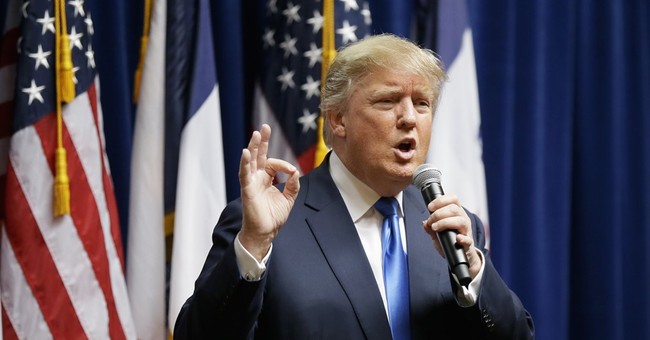 Trending
God help me. I have come to appreciate why some Republican voters like Donald Trump. It's because he embodies New York in all its ostentation and swagger. When punched, he punches back. He owns his anger. He looks as if he is having a blast. At Thursday night's Fox Business Network GOP debate, Trump readily admitted that he had begun to question whether rival Sen. Ted Cruz is a "natural born" citizen because Cruz was closing in on Trump in Iowa polls. He's shameless, yet you cannot help but admire someone who butts heads with the way politics usually works and who leaves the political establishment woozy and seeing stars while he happily straightens his tie.

Don't get me wrong; I think Trump's sound-bite policy about banning Muslims from entering the country runs contrary to the national interest. As former Florida Gov. Jeb Bush noted, the next president will need a coalition of Sunni Muslims and Kurds to destroy the Islamic State group. Trump's remarks about Mexican immigrants -- many being "criminals, drug dealers, rapists" -- should come back to haunt him if he wins the GOP primary.

But you have to hand this much to Trump: He's lively, even if he doesn't win every round. When Trump debates, it is not a choreographed exchange of talking points.

On the stage, Cruz bested Trump when he recalled that his "friend Donald" had lawyers who vouchsafed for Cruz's qualified citizenship credentials in September. "Now, since September, the Constitution hasn't changed," Cruz said to laughter and applause, "but the poll numbers have." When Trump counterpunched, the audience booed. The New York Times -- so excoriated by Cruz during the debate -- reported, "Cruz did not just dominate much of the Republican debate, he slashed, he mocked, he charmed and he outmaneuvered everybody else onstage -- but none as devastatingly and as thoroughly as this campaign's most commanding performer, Donald J. Trump."

Some pundits breezily pronounced Cruz, a Harvard Law School graduate and Princeton champion debater, the winner of the "birther" round. They forget that Trump is a master at sowing seeds of doubt. In 2011, birtherism grew stronger around doubts about President Barack Obama's birthplace. This time, Trump is questioning the "natural born" credentials of Cruz, who was born in Canada to an American mother. Cruz argued that it has been a long-standing practice to consider the children of American citizens to be "natural born" wherever they are born. Though that may be a standard interpretation, the law is not settled. Trump has uncertainty on his side.

Later, The Donald struck back. Moderator Maria Bartiromo asked Cruz just what the senator meant when he said Trump "embodies New York values." This is where Cruz should have backed off and said that though New York is not a particularly conservative town, he sees much to admire in the city's people and their vitality after 9/11. Instead, Cruz stood by his Big Apple-bashing. Trump riposted, "When the World Trade Center came down, I saw something that no place on earth could have handled more beautifully, more humanely than New York."

People who rarely agree with Trump were cheering him from their living rooms.

Bush has improved, but he still comes across as -- to quote Trump -- "low-energy." Ohio Gov. John Kasich also failed to break through -- unless he is running for vice president. Retired neurosurgeon Ben Carson seemed as if he were somewhere else. New Jersey Gov. Chris Christie was fiery and counterintuitive. His strongest moment of the night came when he pushed back against Sen. Marco Rubio's charges that the Jersey guy had flipped on Common Core curriculum, gun control and more. Christie likes to contrast the obstacles he faces as a governor to the easy road of a headline-seeking senator. He concluded by noting that Rubio once had good things to say about him. "I like Marco Rubio," said Christie in a tone more in disappointment than in anger.

But Rubio put himself next in line behind Cruz when he tossed out a list of areas in which Cruz has flip-flopped. For example, Cruz once supported legislation to double the number of green cards for immigrants and increased H-1B visas for skilled foreign workers by 500 percent. No more. Most recently, Cruz flipped from praising NSA leaker Edward Snowden for his "considerable public service" in 2013 to branding Snowden a "traitor." In an email, veteran GOP strategist Tucker Eskew described Rubio's attacks as "energized and very effective."

This primary has been haunted by one big question: Which candidate can beat Trump? Can anyone?