Debra J. Saunders
|
Posted: Jan 06, 2016 12:01 AM
Share   Tweet
The opinions expressed by columnists are their own and do not necessarily represent the views of Townhall.com. 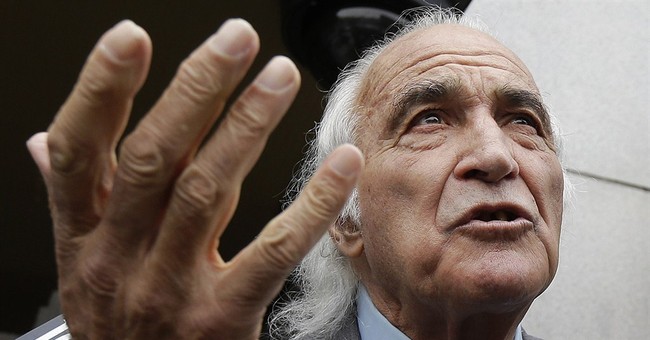 "They went to the toilet and they scraped the bowl," defense attorney Tony Serra railed during his closing arguments for client Raymond "Shrimp Boy" Chow, 56, who stands accused of murder and racketeering. Chow, you may recall, was caught up in a March 2014 federal sweep that netted 26 other defendants, including former California state Sen. Leland Yee, who pleaded guilty to a racketeering charge last year. Serra finished his analogy with the conclusion that federal prosecutors produced a few "scumbags" willing to testify against Chow in return for lenient sentences. "Homicidal maniacs, some of them," they are not to be trusted, Serra warned.

Serra was in a delicate position. You see, his client, Chow, was himself serving 160 months in prison on federal charges that involved murder for hire, conspiracy to distribute heroin and arson when he agreed to cooperate by testifying against Peter Chong, a fellow tong leader. Because of that testimony, the feds freed Chow in 2003. Serra had nothing good to say about the similar co-defendants who agreed to testify against Chow, yet Serra nonetheless told jurors in U.S. District Judge Charles Breyer's courtroom that Chow emerged from prison determined to turn his life around. "People do change," he said.

As for the witnesses who testified against Chow, Serra pointed to their past crimes, drug use and thirst for a "downward departure" of a reduced sentence. The 81-year-old defense attorney then asked jurors: Would they want any of these "snitches" to baby-sit their kids? Would they buy a used car from them?

Prosecutors were in an equally uncomfortable position. Assistant U.S. Attorney Susan Badger praised Chow's onetime partners in crime because "they own their crimes" and accepted responsibility for their misdeeds. No doubt prosecutors praised Chow to the same effect when he turned on Chong, his onetime partner.

Within three years of his release, federal agents had started watching Chow again. In August 2006, Chow was sworn in as "dragonhead" of the Ghee Kung Tong. San Francisco police and the FBI conducted surveillance. The charges against Chow include his alleged role in ordering the murder of the previous dragonhead, Allen Leung.

The feds spent some five years and more than $1 million placing undercover agents near Chow and building a case against him.

Badger described Chow as a ruthless "thug." Fellow Assistant U.S. Attorney William Frentzen called Chow a "chicken hawk" who gets young people to do his wet work for him. If jurors are supposed to see Chow as guilty, how credible should they find the co-operating witnesses who testified against him? They're not exactly Boy Scouts, either.

I know that I'll be hearing from current and former lawmen who will tell me that prosecutors can't close cases with the testimony of choir boys alone. But really, after years of audio surveillance, you'd think prosecutors would have enough evidence to put Chow away for a long time without cutting deals. If they don't have the goods without deals for leniency, what does that say?

Serra sees the feds' original sin as the desire to amass "trophies"; the lust to close high-profile cases distorts the pursuit of justice. If federal prosecutors feel any responsibility for freeing Chow in the first place, they forgot to mention it in their closing arguments.